Intermittent Fasting Could Be Part of a Healthy Lifestyle, Studies Show 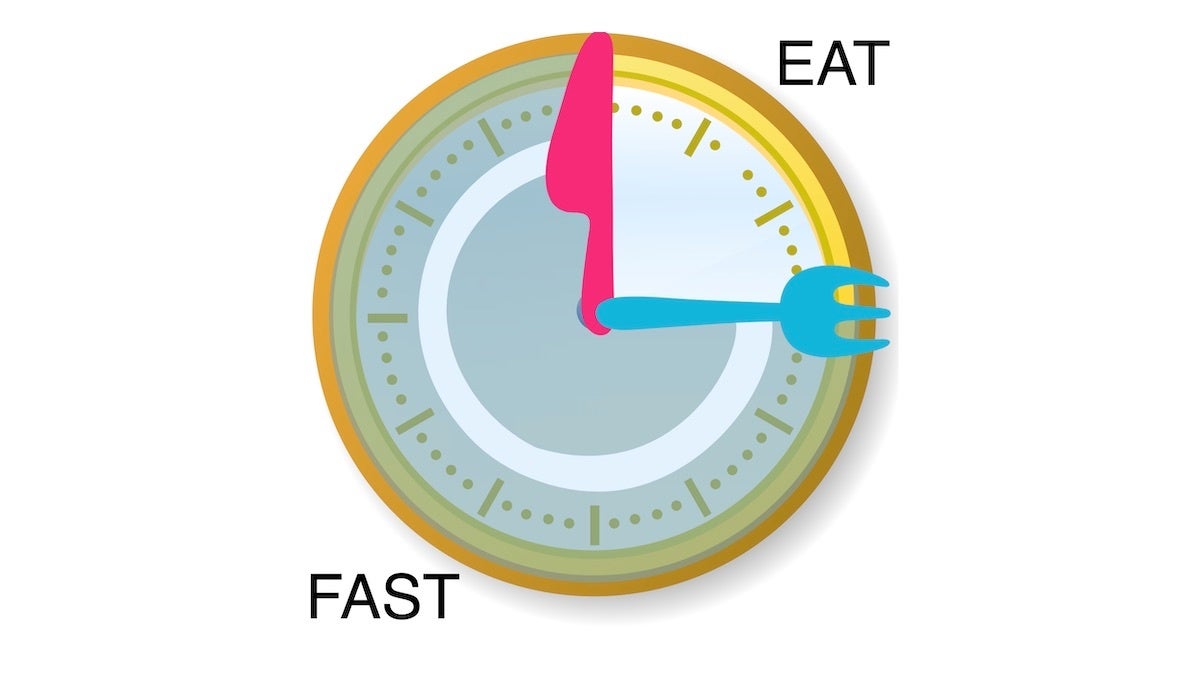 Intermittent fasting limits how much of a day or week you spend eating. Signimu & Google & Penubag / Apache License 2.0

Are you looking to change your eating habits in the New Year?

A new review of the evidence published in the New England Journal of Medicine Thursday suggests that intermittent fasting — the practice of limiting how much you eat during the day or week — can actually be a healthy way to eat.

“The state of the science on intermittent fasting has evolved to the point that it now can be considered as one approach, with exercise and healthy food, to improving and maintaining health as a lifestyle approach,” senior author and Johns Hopkins Medicine neuroscientist Mark Mattson told HealthDay Reporter.

Mattson, who has studied the issue for 25 years and practiced it himself for 20, told the Johns Hopkins Medicine Newsroom that intermittent fasting usually takes two forms.

The diet probably works, Johns Hopkins explained, because it triggers a mechanism that evolved in humans to adapt to periods of scarcity, called “metabolic switching”:

Such a switch occurs when cells use up their stores of rapidly accessible, sugar-based fuel, and begin converting fat into energy in a slower metabolic process.

Mattson says studies have shown that this switch improves blood sugar regulation, increases resistance to stress and suppresses inflammation for various periods of time. Because most Americans eat three meals plus snacks each day, they do not experience the switch, or the suggested benefits.

Mattson and his co-author Rafael de Cabo of the Translational Gerontology Branch of the National Institute on Aging Intramural Research Program looked at studies that suggested a variety of additional health benefits. They included:

The authors said more research needed to be done to see if the benefits of the diet would extend to all types of people, Newsweek reported. Most of the studies to date have focused on overweight young or middle-aged adults.

People who are interested in the diet should speak to their doctors first, Newsweek cautioned, but Mattson said the diet would likely benefit those who are overweight and either at risk for or suffer from heart disease, diabetes and inflammation.

Hannah Kittrell, a registered dietitian and manager of the Mount Sinai PhysioLab in New York City who was not involved with the article, also told HealthDay Reporter that the diet could be beneficial.

“If you’re thinking of intermittent fasting as a fad diet, I think it’s actually a pretty legitimate option,” she said. “The reason for that is it’s not completely cutting out any food groups. It’s not telling you don’t eat carbs, don’t eat fat. It’s just modulating when you’re eating food.”

So if you’ve spoken to your doctor and decided intermittent fasting is right for you, how do you get started?

“[T]ry starting intermittent fasting with a spouse, partner or friends at work,” Mattson told Newsweek. “Just as with starting an exercise regimen it is easier to do with someone else than alone.”

You should also be sure to drink plenty of water and, when you do eat, eat healthy foods like vegetables, fruits, nuts, fish and lean meats, he said.