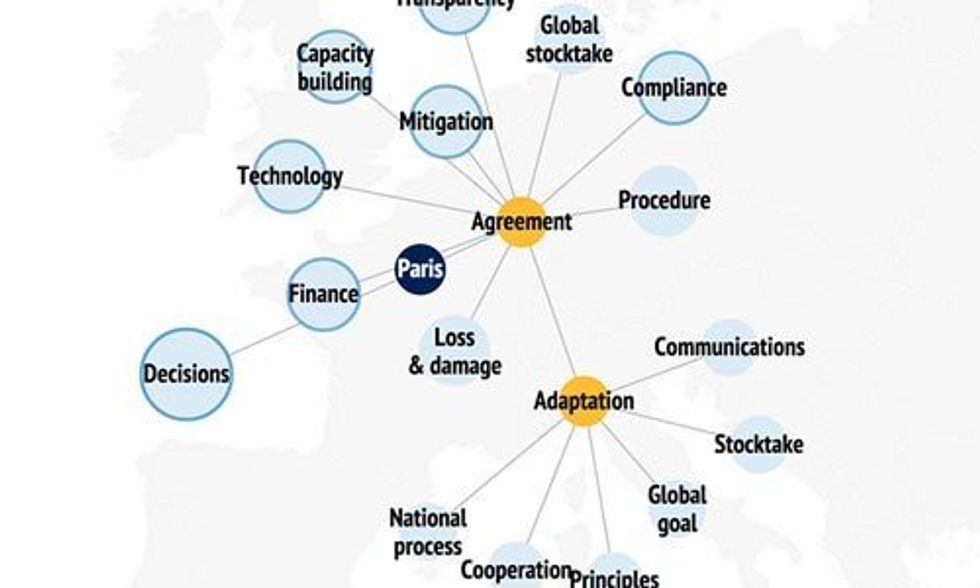 From Nov. 30 to Dec. 11, the world’s governments will gather in Paris to negotiate 54 pages of dense legal text.

Heavily bracketed, filled with uncertainties and expressed in opaque UN jargon, this is the final draft of a text that has been in the making since 2010.

This is the document that 196 parties hope to transform into a historic UN climate agreement on Dec. 11 in Paris.

This agreement will aim to provide direction for decades to come on how countries reduce their emissions and cope with the impacts of climate change.

Carbon Brief has broken up the text into its component parts and summarized the issues, creating an interactive tool that maps out the draft of the Paris climate deal.

Click on each of the bubbles to reveal an explanation of the issue, along with the key options available to the parties. Photo credit: Carbon Brief

Like a family tree, the graphic will expand as you delve further into the text, revealing further detailed debates contained under each of the headline topics. Equally, click on any expanded bubble and it will retract to ensure uncluttered navigation.

The structure of the graphic is based on the structure of the text itself, with bubbles divided into separate branches according to whether they appear in the “agreement” or the “decisions” section of the document. The agreement is the legal core of the agreement, while the decisions function as an instruction manual on how to use it.

The Evolution of the UN Text

After watching hopes of a UN climate deal crumble around them in Copenhagen in 2009, countries agreed to “launch a process to develop a protocol, another legal instrument or an agreed outcome with legal force under the convention applicable to all parties.”

One of the most important tasks has been to ensure that, when the Paris conference begins, there is a draft text already on the table that can provide the basis for negotiations. This means that negotiators will have a good idea of what needs to be discussed over the course of the two weeks, with the initial sprawl of ideas whittled down to the key debates.

This sprawl was captured in the so-called Geneva text. This 86-page document, which was produced in February 2015, was the first incarnation of the draft deal.

It remains the only text with any official status. But during subsequent negotiating sessions countries have worked to streamline it into something more manageable that they can work from in December. In doing so, they have had to walk the fragile line between a text that is clear and concise and yet contains all the necessary information.

Progress has ebbed and flowed. A new draft was issued in October, slimmed down to a short 20 pages. But countries were quick to express their displeasure at this edit, accusing the co-chairs of the negotiations of prematurely deleting key passages of the text.

In October, at the most recent session, parties worked to put the flesh back on the bones. They negotiated a text that was more than twice as long, but which countries agreed they could work with in Paris.

The co-chairs released another version in November, lightly edited to make it neater (the October version having been hastily assembled and released at 11:30 p.m. after a long week of negotiations).

This interactive was developed in collaboration with Kiln, a data visualization and digital journalism studio.