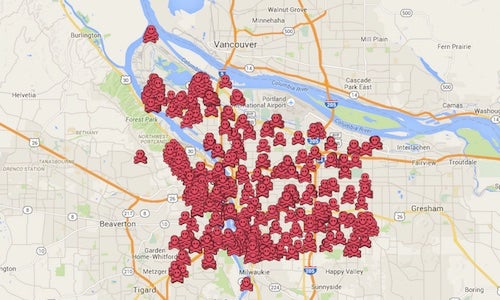 Reverend Billy and The Stop Shopping Choir have published two new interactive maps showing where glyphosate is being sprayed in California’s Bay Area and Portland.

Based on the maps, glyphosate—the cancer-linked main ingredient in Monsanto’s weedkiller Roundup—is being used in a number of public spaces including parks and playgrounds in both cities.

According to a press release sent to EcoWatch, the Portland map displays 1,592 locations in the city where herbicides containing glyphosate are being sprayed.

“Monsanto’s Roundup and its key ingredient glyphosate are major weapons in the Portland Parks Department’s arsenal of herbicides,” the release states.

A Care2 petition has been posted to stop the use of glyphosate in Portland’s public green spaces. The campaign, which has gathered more than 17,600 signatures, seems to be picking up momentum. In recent months, Portland lawmakers have mulled over new restrictions on the use of synthetic pesticides in the city.

Meanwhile, in the city of San Francisco alone, more than 200 locations such as ball fields, libraries, playgrounds and parks are being doused with the herbicide, Inhabitat reported.

Rev. Billy’s San Francisco map was published in collaboration with the San Francisco Forest Alliance. The alliance has requested that the San Francisco Department of Environment remove Tier I and Tier II herbicides (especially Roundup/ Aquamaster and Garlon 4 Ultra) from the 2016 Reduced Risk Pesticide List, “without exceptions.”

San Francisco mother and Inhabitat editor Jill Fehrenbacher is currently petitioning for a glyphosate ban in public parks. The campaign has more than 12,000 signatures to date.

“If this sounds like just a local issue within San Francisco, it is not. Roundup/glyphosate is the most widely used herbicide in the world, and city governments, organizations and companies spray it EVERYWHERE as a cost-effective approach to weed removal,” Fehrenbacher wrote on the Change.org petition. “Glyphosate may have an important place in agriculture (another debate entirely), but a possibly-carcinogenic pesticide should not be sprayed thoughtlessly around schools and public parks for no good reason. It is too much of a gamble with our public health.”

Earlier this year, Reverend Billy and The Stop Shopping Choir released a map of New York City locations being sprayed with glyphosate. The data was obtained by the group and members of the Coalition Against Poison Parks from the New York City Parks Department.

“Monsanto’s Roundup continues to be the major weapon in the New York City parks department’s arsenal of herbicides while scientific evidence that Roundup’s key ingredient, glyphosate, is toxic approaches the level of scientific consensus,” the New York City-based group said in February. “The frequency of parks department’s use of Monsanto’s Roundup doubled since 2013 with 1,300 spraying events reported. In 2014, overall herbicides use reported by volume increased by 16 percent with a 9 percent increase in the amount of glyphosate applied by volume.”

Organizers told EcoWatch that a “National Map of Roundup City Spraying” is coming together. Glyphosate maps for Los Angeles, Oakland, Seattle and Philadelphia are currently in the pipeline.

Glyphosate, which is the most widely applied pesticide in the world, was classified as “probably carcinogenic to humans” in March 2015 by the World Health Organization’s International Agency for Research on Cancer (IARC). The organization also observed that non-Hodgkin lymphoma and other hematopoietic cancers are the cancers most associated with glyphosate exposure.

Monsanto's #Glyphosate is the most heavily used weed killer in history: https://t.co/wuZAW30A25 via @ecowatch

Monsanto has long maintained the safety of their product, denying the link to cancer and demanding a retraction of the IARC’s report.

Last September, California’s issued plans to add glyphosate to the state’s list of chemicals known to cause cancer, making it the first state in the country to do so. Monsanto promptly filed a lawsuit to prevent the state from doing so.