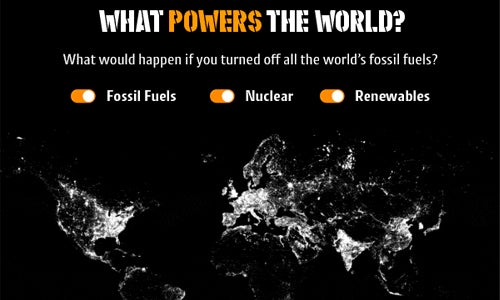 Gocompare.com launched an interactive map showing how much of the world’s electricity is still reliant on coal, oil and gas, and who’s using renewable energy to keep the lights.

Check out the interactive map here:

Despite increasing evidence of climate change and the pressure imposed by inter-governmental conventions, two thirds (67 percent) of the electricity in the world is produced from fossil fuels. There are as many as 14 countries who exclusively use fossil fuels to generate their electricity. Most of them are oil-rich states in the Middle East and Asia, Trinidad and Tobago who also have rich oil fields, and Botswana which is struggling to shake off its coal dependency.

Fossil fuels hold a 68 percent share of the United Kingdom’s energy mix as coal and natural gas continue to be used to produce electricity, which is 23 percent higher than the EU average of 45 percent. George Osborne’s recent move to cut the oil and gas levy is likely to increase extraction of fossil fuels in Britain.

Only seven countries in the world use renewable energy to produce all of their electricity. Leading the charge among them is Iceland, which makes the most of its geothermal energy. Other, perhaps unexpected entrants on that list are Ethiopia, Albania and Zambia—countries which draw power from their rivers to keep the lights on. Norway, which is the biggest exporter of oil in the EU, gets as little as 2 percent of its electricity from fossil fuels with the other 98 percent coming from renewable sources.

Britain’s use of renewable energy in the production of electricity is as low as 16 percent. That is almost exactly on par with India (17 percent) and China (14 percent), countries which have been investing heavily in renewable energy but continue to rely on fossil fuels. The U.S. is further behind with as little as 13 percent of its electricity derived from replenishable sources, despite developing some of the world’s largest wind farms in recent years.

Of the 30 countries who use nuclear reactors to generate electricity, 19 are in Europe. France derives as much as 74 percent of its electricity from nuclear power, while Belgium, Slovakia and Hungary all depend on it for over 50 percent of their electricity supply.

Japan, which prior to the Fukushima tragedy of 2011 drew 30 percent of its electricity from nuclear power, has reduced that useage to just 1 percent. Nuclear power continues to remain a no-go area for most countries, as even Kazakhstan and Australia—the world’s biggest uranium producers—elect not to develop nuclear power at all.

“What we’ve tried to highlight through this research is just how reliant so much of the world still is on fossil fuels and nuclear power. It’s clear that a lot work needs to be done, in the future, to keep the lights on without further damage being done to the environment. However, it was also encouraging to find out that some countries have managed to significantly reduce their reliance on non-renewable electricity generation.”

The Beginning of the End of the Old Oil Order