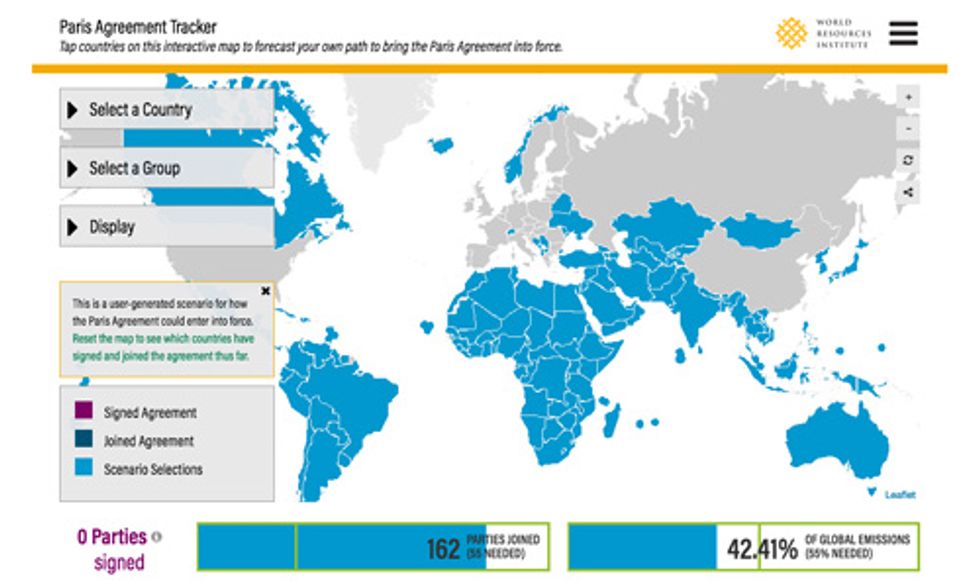 Next week, more than 100 heads of state and other high-level government officials are expected to come to New York City for the signing ceremony of the Paris agreement adopted at COP21 last year. The UN expects signatures at the ceremony to exceed the number of first-day signatures of any other international agreement, demonstrating overwhelming political support for global climate action.

Signing is the first of a two-step process for countries to formally join the agreement—the next is ratification. Once 55 Parties to the UN Framework Convention on Climate Change (UNFCCC) representing at least 55 percent of global greenhouse gases complete this process, the agreement will “enter into force" or come into effect and be legally binding.

UN Secretary-General Ban Ki Moon has called for leaders to sign and ratify the agreement as soon as possible. The momentum has already started, with a number of countries receiving approval from their parliaments to ratify ahead of the signing ceremony on April 22.

But how soon will countries join? And what unique mix of countries is necessary to cross the 55-55 threshold that brings the Paris agreement into full effect?

The World Resources Institute unveiled the Paris Agreement Tracker on Wednesday. The interactive tool enables people to monitor countries' progress toward ratifying the Paris agreement and allows users to create, share and embed their own combinations for bringing it into force.

At the time of writing this blog, the Paris Tracker Map is blank, as no countries have signed or joined the agreement yet. By tapping on countries or selecting geographies or negotiating groups, you can see what possible combinations of countries would cross the emissions and countries threshold.

Try it out for yourself here.

Some insights that are immediately apparent include:

We Need at Least One of the Top Four Emitters

As you can see in the scenario below, even if every other country in the world ratifies the agreement, it cannot go into force without at least one of the four biggest emitters (China, U.S., EU and Russia) doing so as well.

U.S. and China Together Get Most, But Not All, of the Way There

The U.S. and China announced their intention to sign the Paris agreement on April 22 and committed to join the agreement this year “as early as possible." Each country must follow its respective domestic processes before ratifying. The U.S. can join based on the president's authority, but for China, the approval of the Standing Committee of the National People's Congress is also required.

Combined, the U.S. and China account for about 38 percent of global emissions, which gives a major boost to efforts to reach the threshold for entry into force. We would still need a number of relatively large emitters, such as Russia, India, Japan, Brazil, Canada, Korea or Mexico, to come on board early to meet the 55 percent emissions threshold quickly.

Where Are We at Right Now?

A number of countries, namely Fiji, Palau, Marshall Islands, the Maldives and Switzerland, have already completed their domestic approval processes allowing them to sign the Paris agreement and ratify on April 22. Others, such as Tuvalu, have indicated they will do so by the signing ceremony.

Although these countries represent only a small amount of total global emissions, their leadership in early ratification is crucial to getting to the required 55 countries. We would easily get there if other small island developing states and members of the Climate Vulnerable Forum ratified.

How Long Will it Take for the Paris Agreement to Enter into Force?

It is reasonable to think entry into force would happen in 2017, but it's possible that a number of countries could join this year and pass the threshold for the agreement to go into effect. But given the varying timelines for countries to complete their domestic approval processes, the timing of entry into force is uncertain.

For example, in Australia, the only requirement is formal notification and introduction of the agreement in Parliament, whereas in Mexico, the consent of the Senate is also required. For Brazil, the approval of the National Congress is required, which means seeking approval of two separate houses of Parliament. And still other countries, such as Vietnam, apply different approval processes depending on the nature of the international agreement.

Even though the EU is considered one “party" to the agreement, it will likely have to act jointly with its 28 member states. Each member state must complete its domestic approval processes and the Council of Ministers, with the consent of the European Parliament, will also need to adopt a decision to ratify. This could take a couple of years, but early entry into force is still possible without the EU.

While some compare the Paris agreement to the Kyoto Protocol process, the previous international climate agreement, there are some important differences. Although the Kyoto Protocol followed a similar 55 Parties/55 percent of emissions approach, its threshold was based only on the carbon dioxide emissions from developed countries. By contrast, the Paris agreement's entry into force takes into account all greenhouse gas emissions from all countries, so it should take legal effect much more quickly than Kyoto's seven years.

The Paris Agreement Tracker shows the importance all countries play in bringing this international climate agreement into full effect. April 22 represents the next step in what was started last December. All countries should sign and join the Paris agreement as soon as they are able to send a strong signal that they're moving toward a low-carbon, climate-resilient world.