Interactive Map: Find Out if Your Child’s School Is Near a Chemical Plant 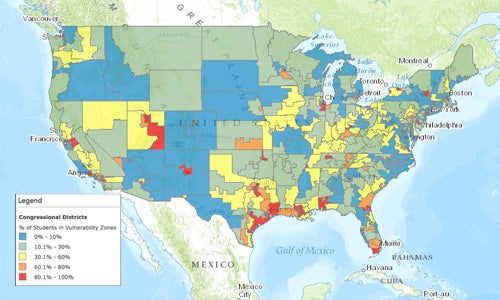 In the early evening of April 17, 2013, a fertilizer storage and distribution facility on the small town of West, Texas, blew up, killing 15 people, injuring 160 more and leveling much of the town. The plant was last inspected by the Occupational Safety and Health Administration (OSHA) in 1985. The company had apparently failed to report the amount of dangerous ammonium nitrate the facility stored.

Among the buildings destroyed was the West Middle School, which fortunately was not occupied at the time. But ineffective safety regulations, coupled with public ignorance about chemical plants, are putting millions of U.S. schoolchildren at risk, according to a new interactive map put together by the Center for Effective Government (CEG).

According to the Society for Environmental Journalists, “After the Bhopal chemical disaster that killed thousands in India in 1984, Congress passed a law in 1990 requiring facilities handling dangerous amounts of chemicals to file ‘risk management plans'(RMPs), detailing how many people might be hurt by an explosion or leak. Originally, these plans were supposed to be made public. But in 1999, Congress passed another law (after heavy lobbying by the chemical industry), drastically restricting public access to RMP information. Proponents justified hiding the information by claiming it would provide a ‘roadmap for terrorists.'”

GEC has compiled a database of some of the most dangerous facilities in the U.S., broken down by congressional districts. It shows the number of schools in each district, the number within the vulnerability zone and the percent of the district’s students who attend school within that zone. The red zones include the highest concentration of chemical manufacturing and storage facilities.

The U.S. Environmental Protection Agency is currently considering changes to its RMP rules; comments are due by Wednesday.