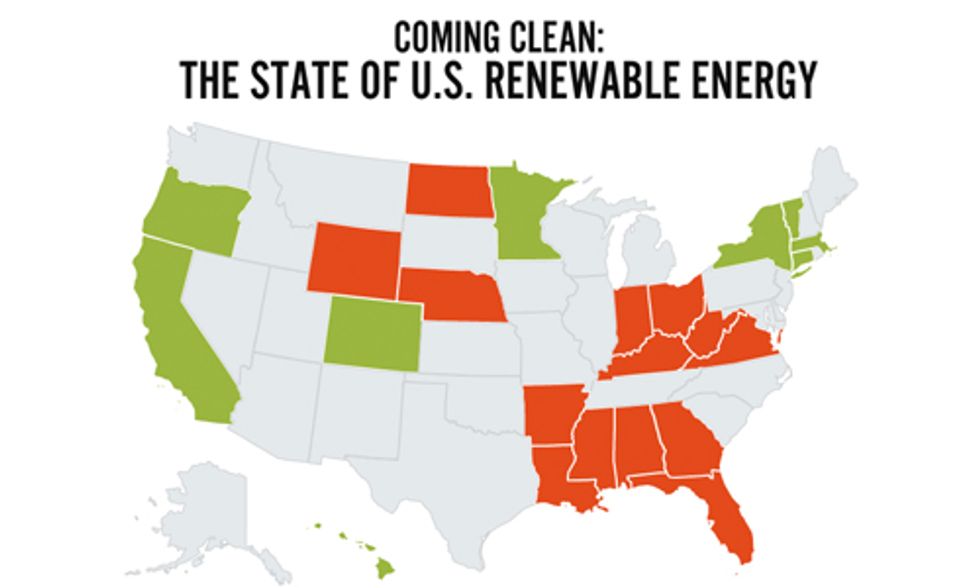 What states are moving ahead on clean energy and what states are lagging behind? A new interactive map released by Earthjustice lets you see at a glance.

This map lets you find out where any state stands on clean energy. Image credit: Earthjustice

The map is part of an Earthjustice report Coming Clean: The State of U.S. Renewable Energy. It lets you locate your state alphabetically by name or find the states that fall in each category: "Spotlighting Green," "Too Close to Call," and "Lagging Behind."

You can also filter for solar/wind energy sources, states with goals stronger or weaker than the U.S. Environmental Protection Agency (EPA) 2030 goal  for that state under President Obama's Clean Power Plan, states where Earthjustice has been involved and how, and states where attacks on clean energy goals are taking place. The map shows that finalizing the Clean Power Plan, which sets different goals for each state to reduce carbon emissions by 2030, will be essential to moving forward in states that have so far been reluctant or hostile to investing in clean energy.

The report also provides more detailed information on each state including its top three energy sources, its own renewable goal and how close it is to meeting the EPA goal, whether its goal is voluntary or mandatory, and where a state is excelling and where it needs to do more work as far as its current policies on renewable energy.

“The Clean Power Plan proposes first-ever limits on carbon pollution from the biggest contributors to climate change: dirty coal plants,” said Earthjustice vice president of litigation for climate & energy Abigail Dillen. “With the comment period for the plan ending the first of December, we need to support these limits, while also demanding a more ambitious final rule that reflects the role that renewable energy can and must play in tackling climate change.”

Among the standouts whose own renewable energy goals for 2030 exceed the EPA's are California, Colorado, Connecticut, Hawaii, Massachusetts, Minnesota, New York and Oregon. Hawaii, while heavily oil and coal dependent now, with just 4 percent of its energy coming from its top renewable, wind, stands out for its ambitious goal of reducing emissions by 40 percent by 2030, compared to the EPA's goal of 1 percent for the state. It's making great strides in solar energy, placing it 6th in the country with one in nine homes now having installed solar power generation.

At the other end of the spectrum are heavily coal-dependent states that have formulated no emissions-reduction goals—including Kentucky, Nebraska and Wyoming. The saddest case is that of Ohio where, Earthjustice notes, the state set a goal of a 12 percent reduction, a percentage point higher than the EPA goal—but there's an asterisk: "As of 2014, Ohio's Renewable Portfolio Standard has been frozen due to political interference."

It explains, "The Buckeye State has become a battleground where the fossil fuel industry has been spreading false information and flawed analysis claiming renewable energy sources are more expensive than fossil fuels. The state was on track for a clean energy future but was derailed in 2014 by a bill that halts Ohio's renewable energy standards for two years. Unfortunately, Ohio has also joined 11 other states in suing the EPA to block the Clean Power Plan."

And it warns, "Unfortunately, Ohio has also joined 11 other states in suing the EPA to block the Clean Power Plan."

The interactive map will tell you whether your state is among them.

The map is part of a four-part Earthjustice web series on the Clean Power Plan that focuses on climate change as a human rights issue, how the plan works and how it can go further to safeguard communities, where each state stands on the road to a clean energy country, and why social justice and public health leaders are hopeful for the future.