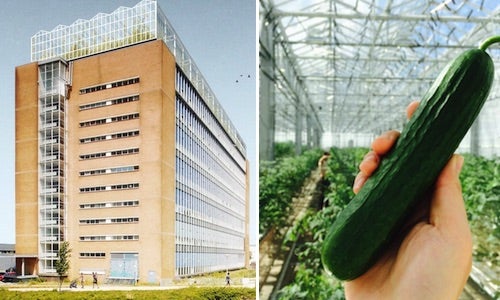 A former telecommunications building in The Hague, Netherlands has been transformed into Europe’s largest commercial urban food production facility. 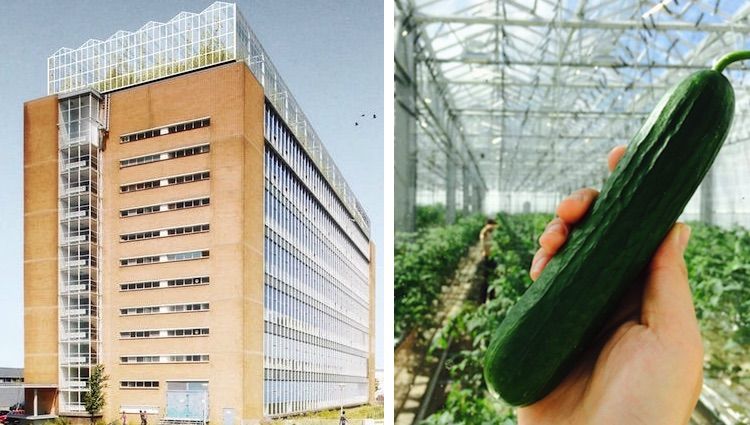 The UF002 De Schilde rooftop farm has been dubbed as “Times Square of Urban Farming” due to its prime location and access in the city, Swiss developers UrbanFarmers said.

The enterprise consists of a 1,200-square-meter rooftop greenhouse on the top floor and a 370-square-meter-indoor tilapia farm on the floor below. The building will also house a 250-square-meter processing and packaging facility.

Opening next month, developers estimate that the farm will churn out 45 tons of vegetables such as cucumbers, tomatoes and microgreens and 19 tons of fish a year.

The Guardian reported that the aim is to feed 900 local families, plus restaurants and a cooking school.

Greenhouse in the sky: inside Europe's biggest urban farm https://t.co/3eBG9R8jEE

The building, built in the 1950’s by architect Dirk Roosenburg, was once the site of a Philips television and phone set factory. According to the Guardian, in 2013, The Hague city council launched a competition for sustainable food companies to find new uses for the formerly empty building.

UrbanFarmers won the competition and received free council support and a chance to rent the space after securing private funding and a European loan from The Hague’s Fund for Location and Economy, The Guardian wrote.

“It’s sometimes said that children who live in the city believe tomatoes grow in the supermarket or fish are born in the freezer,” Joris Wijsmuller, head of sustainability at The Hague city council, told the publication. “The municipality hopes the whole building will be a sort of gathering place for education, research and innovation.” 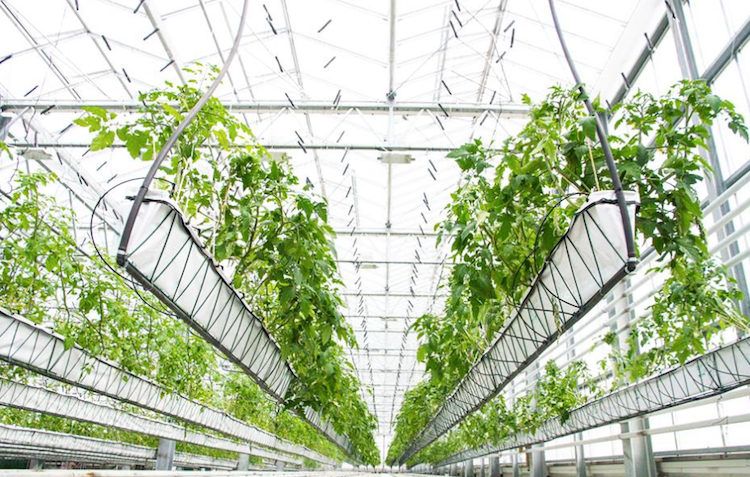 Construction of the 1,200-square-meter rooftop greenhouse has been completed. UrbanFarmers will host a grand opening on May 20. Photo credit: Rosalie Ruardy / Facebook

Mark Durno, managing director of UrbanFarmers Benelux said in a statement last year that “repurposing this signature building is a next step towards realizing alternative means of sustainable fish and vegetable production.”

As Emma Hansen of the Worldwatch Institute wrote, urban farming presents a solution to a resource-heavy agricultural system as well as a unique opportunity to grow crops on land that is vacant or unused.

The UN Food and Agriculture Organization notes that 800 million people worldwide grow fruits or vegetables or raise animals in cities, producing an impressive 15 to 20 percent of the world’s food. The organization also says that many city dwellers in the developing world grow food for subsistence, food production has been brought back to city centers in recent years in developed countries in a concerted effort to address sustainability issues in our food system.

“Commercial and sustainable urban agriculture will help to reduce pressure on our oceans and improve the supply chain by bringing ultra-fresh, safe produce as close to the point of consumption as possible, minimizing waste,” Durno continued in his statement. “We are excited to be paving the way for more sustainable and commercially viable urban farms.”

In fact, we might be seeing more rooftop greenhouse projects in the near future. A recent newsletter touting the grand opening of The Hague rooftop farm indicates that UrbanFarmers is looking to expand in the U.S.

Our global expansion continues to take shape. With UrbanFarmers USA Inc., we have established a U.S.-based subsidiary in New York City. Recently, we hosted the “Tomato meets Big Apple” event, where we presented a plan to launch an East Coast rooftop farm portfolio with 10 rooftop sites across New York, New Jersey and Connecticut and the potential to grow food for 10m people within a short distance. We are excited to keep you posted on this journey.

Learn more about the UrbanFarmers UF002 De Schilde rooftop farm in the videos below: