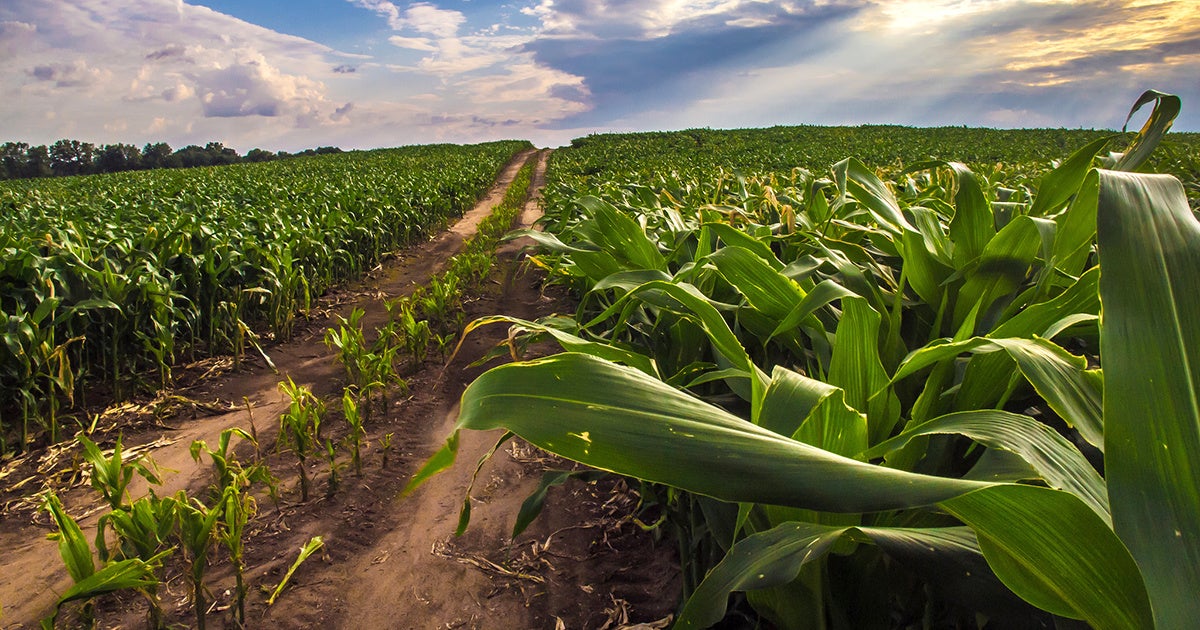 Global warming could increase both the number and appetite of insect pests, new research finds, which could pose a serious threat to global crop production.

The study finds that global warming of 2C above pre-industrial levels—which is the limit set by the Paris agreement—could cause pest-related yield losses from wheat, rice and maize to increase by 46 percent, 19 percent and 31 percent, respectively.

And each additional degree of temperature rise could cause yield losses from insect pests to increase by a further 10-25 percent, the research shows.

Losses from pest infestation are likely to be largest in China, the U.S. and France—three of the world’s most important grain producers, according to the findings.

At present, around 10-16 percent of global crop production is lost to pests—including insects, fungi and bacteria.

Thousands of insect species are known to threaten food production. One of the most well-known pests, the desert locust, feeds on a wide range of crops—including rice, maize and sugarcane—and can swarm and strip a crop field within an hour.

Other insects, such as the western corn rootworm, target specific crops. The rootworm, for example, feeds on maize during both its larval and adult beetle life stages and currently costs U.S. farmers around $1bn a year in lost revenue.

The new study, published in Science, explores how climate change could alter the activity of 38 of the world’s most-studied insect crop pests.

Climate change could increase the activity of insect pests in two ways, according to the research team, which was led by Prof. Curtis Deutsch, an ecologist from the University of Washington.

First, rising temperatures boost the rate at which insects can digest food—causing them to demolish crops at a faster rate.

Second, in temperate regions, warming temperatures could cause insects—which are ectothermic or “cold-blooded”—to become more active and, thus, more able to reproduce.

For the study, the researchers made of use of existing data on how temperature is known to affect the population growth rate, food consumption rate and overall survival of insect pests under laboratory conditions.

The researchers used this information to inform a set of models projecting yield losses from insect pests for wheat, rice and maize under different levels of temperature rise. The projections assumed that total global crop yields will remain the same as today.

The charts below show the expected crop yield loss in megatonnes per year as a result of increased insect food consumption—or “metabolic activity”—(purple triangles) and population growth (orange circles and green asterisks) for wheat (A), rice (B) and maize (C) under various levels of global temperature rise. A dashed line is used to indicate the current loss as a result of insect pests. 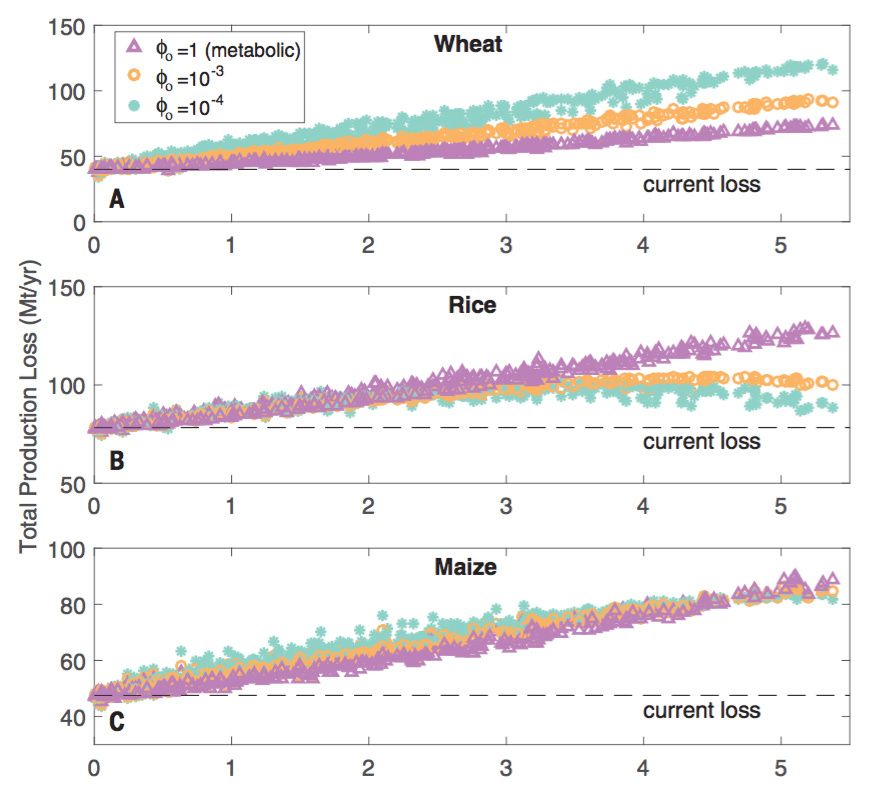 Losses are projected to be largest for maize and wheat because these crops are mostly grown in temperate regions – where warming is expected to boost insect population numbers, the researchers say.

Rice, on the other hand, is grown mostly in tropical regions—where temperatures are already optimal for insect reproduction. Further temperature increases are therefore likely to cause small declines in insect numbers, the research finds, leading to an overall smaller effect on yield losses.

The maps below show the projected geographic pattern of insect-related yield losses for wheat (A), rice (B) and maize (C) under 2C of global warming. On the maps, dark red shows large percentage increases in crop losses while dark blue shows large decreases. 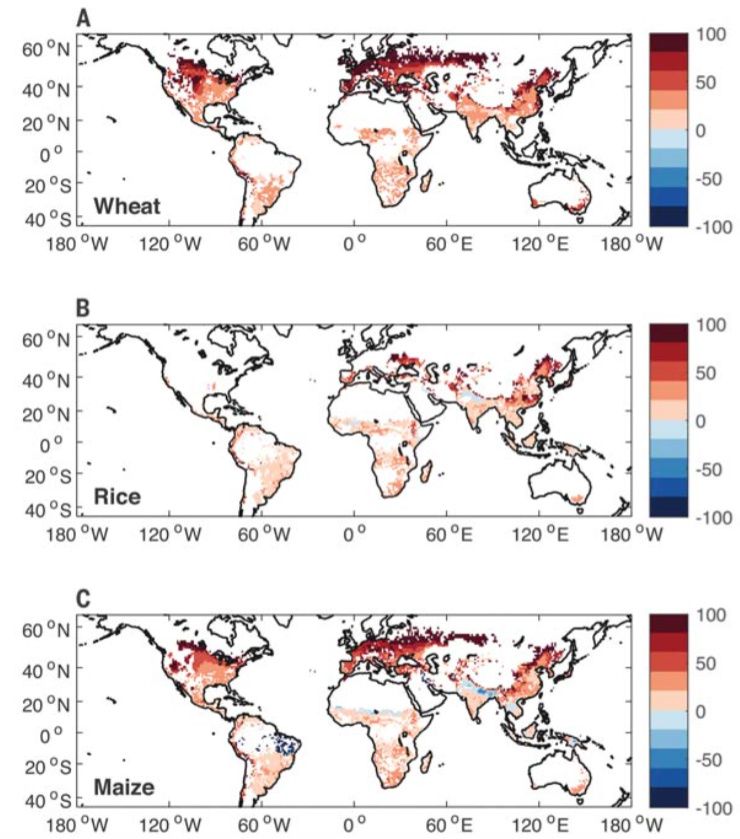 The maps show how the largest losses to crop yields in percentage terms are expected in Europe and North America, including in the U.S. and France—two of the world’s largest grain producers.

Europe’s wheat-growing regions—collectively the most productive in the world—could be particularly affected by losses, the results show. Up to 11 European countries, including the UK, Sweden and Ireland, could face insect-related losses of 75 percent or higher, the study finds.

Moderate losses are also projected across much of sub-Saharan Africa and southeast Asia—two regions currently facing high levels of hunger. Writing in their research paper, the authors said:

“Poor grain consumers and farming households, who account for a large share of the world’s 800 million people living in chronic hunger, will suffer most.”

The findings should serve a “call for action on climate change mitigation and adaptation,” Prof. Markus Riegler, an insect biologist from Western Sydney University, writes in an accompanying perspectives article. He said:

“Everyone must be involved in change: farmers, industries, policymakers, and the wider society. There is also an increased need to focus on plant protection, particularly given that many insecticides are being banned over human and environmental health concerns.”

The research offers “a global perspective” of how climate change could impact the damages caused by pests, said Prof. Christer Björkman, an insect ecologist from the Swedish University of Agricultural Sciences, who was not involved in the study. However, the study does have a few shortcomings, he told Carbon Brief:

“One is that the authors only model the pests themselves. This is a great simplification because we know their host plants and their natural enemies are affected by the same temperature changes.”

Research shows that climate change could impact many of these enemies – including birds, mammals and parasites. Björkman said:

“In other words, the study ignores many key ecological interactions of potentially great importance. Another [unconsidered factor is] the nutritional value of plants may change.”

Research covered by Carbon Brief earlier this week found that the nutritional value of key crops including rice, wheat and maize is likely to fall as CO2 levels rise.

If crops become less nutritious, insects will have to consume more plant matter to get the nutrients they need, Björkman said, potentially raising yield losses further.