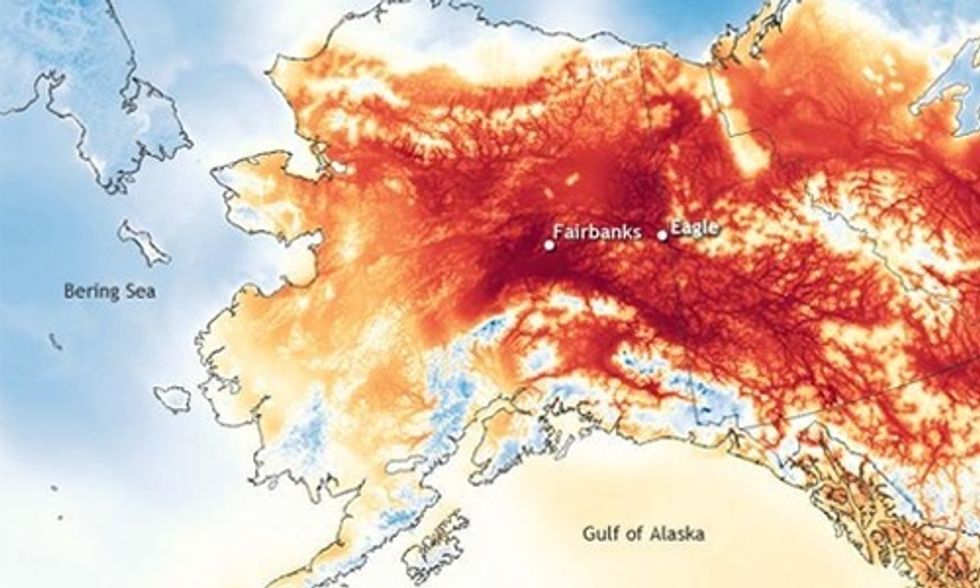 Alaska, along with the rest of the Arctic, has been warming even faster than other regions of the world due to climate change. That was the findings of a report this spring from the Department of Energy’s Pacific Northwest National Laboratory, which found that the rate of warming will only continue to increase in the coming decades.

The signs of rapid warming in Alaska were everywhere this past winter. The Iditarod was moved north 300 miles to Fairbanks because Anchorage had record low snowfall. A ski resort outside of Juneau had to close because of low snowfall and warm temperatures that inhibited snow-making.

Now the 49th state experienced a heat wave at the end of May. Over Memorial Day weekend, while Texas was being inundated with floods, parts of Alaska were warmer than Arizona. On May 23 in Fairbanks, the temperature reached 86 degrees Fahrenheit, while Phoenix topped out at 83 for the day, reports Al Jazeera. Even the town of Bettles, which is north of Fairbanks and falls within the Arctic Circle, recorded a temperature of 82.

That same day, Eagle, Alaska hit 91 degrees Fahrenheit, marking the earliest 90-degree day in state history, according to NASA Earth Observatory. And it wasn't just one unusually warm day. "Between May 16 and May 24, Eagle hit 27 degrees Celsius (80 degrees Fahrenheit) or higher daily—its second longest such streak on record for any time of the year," says Al Jazeera.

This map shows the record heat northwestern Canada and parts of Alaska experienced in the third week of May. Photo credit: NASA Earth Observatory

Even America's northernmost city, Barrow, Alaska, set record high temperatures for four out of the six days between May 17-22, topping out at 47 degrees on May 21 (nearly 18 degrees above normal), The Weather Channel reports. This may sound like nothing compared to the current heat wave in India, "but north of the Arctic Circle, this is extreme warmth for late May," says The Weather Channel.

This particular heat wave in Alaska and northwestern Canada has to do with two typhoons altering the jet stream pattern."A series of two western Pacific super typhoons—Noul and Dolphin—have done a number on the (jet stream) pattern across the north Pacific following their extratropical transition," says Dr. Michael Ventrice, operational scientist at The Weather Channel Professional Division.

This "persistent high-pressure system ... is but one consequence of a developing El Niño in the eastern Pacific," says Al Jazeera. While El Niño may be exacerbating the warmth, the long term trend shows the Arctic will continue to warm from climate change. It has warmed faster than anywhere else in the world over the last 30 years.

The effects of the warming are many-fold. Anchorage recorded its warmest April and it will probably be its least snowy season on record with only 25.1 inches of snow to date (its prior least snowy season was in 1957-1958 with 30.4 inches), according to The Weather Channel. The rapid snowmelt led to flooding in some areas and fire danger is already high in what experts worry might be the worst wildfire season yet.