Innovative Wind Turbine Smaller Than a Penny Could Power Your Smartphone 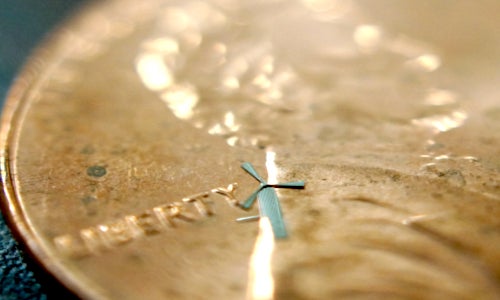 Researchers at the University of Texas at Arlington have developed a renewable energy technology smaller than our smallest form of currency, yet capable of charging smartphones.

The micro-windmills designed by electrical engineering professor Dr. J.-C. Chiao and research associate Smitha Rao are so tiny that a single grain of rice could hold about 10 of them, according to a news release from the university. The duo envision embedding hundreds of micro-windmills in a sleeve for a cell phone. Users could generate electricity for the phone’s battery by waving it in the air or by holding it up to an open window on a windy day.

“Imagine that they can be cheaply made on the surfaces of portable electronics,” Chiao said, “so you can place them on a sleeve for your smart phone.

“When the phone is out of battery power, all you need to do is to put on the sleeve, wave the phone in the air for a few minutes and you can use the phone again.” 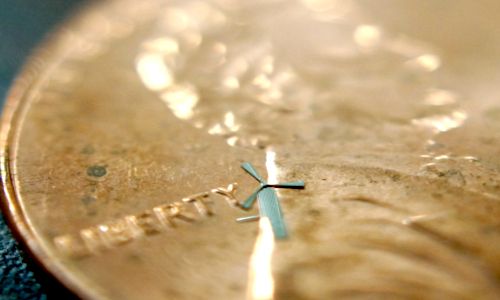 One of the micro-windmills is placed on a penny. Researchers in Texas envision embedding hundreds of them in a smartphone sleeve to provide a charge with the wind. Photo credit: University of Texas at Arlington

Taiwanese fabrication foundry WinMEMS Technologies is exploring ways to commercialize the turbines. The university has applied for a provisional patent.

At its widest point, one of the micro-turbines measures 1.8 millimeters. According to Chiao and Rao, the turbines tested well in September amid strong, artificial winds because of their nickel alloy and aerodynamic design.

“The micro-windmills work well because the metal alloy is flexible and Smitha’s design follows minimalism for functionality.” Chiao said.

Chiao said the technology’s deployment could be extended to home energy. Thousands of turbines could be mounted on home or building walls to produce the energy needed for lighting, security, wireless communication and more. The researchers have also developed gears, inductors, pop-up switches and grippers that are all as small as a fraction of the diameter of a human hair.

“I think we’ve only scratched the surface on how these micro-windmills might be used,” Rao said.