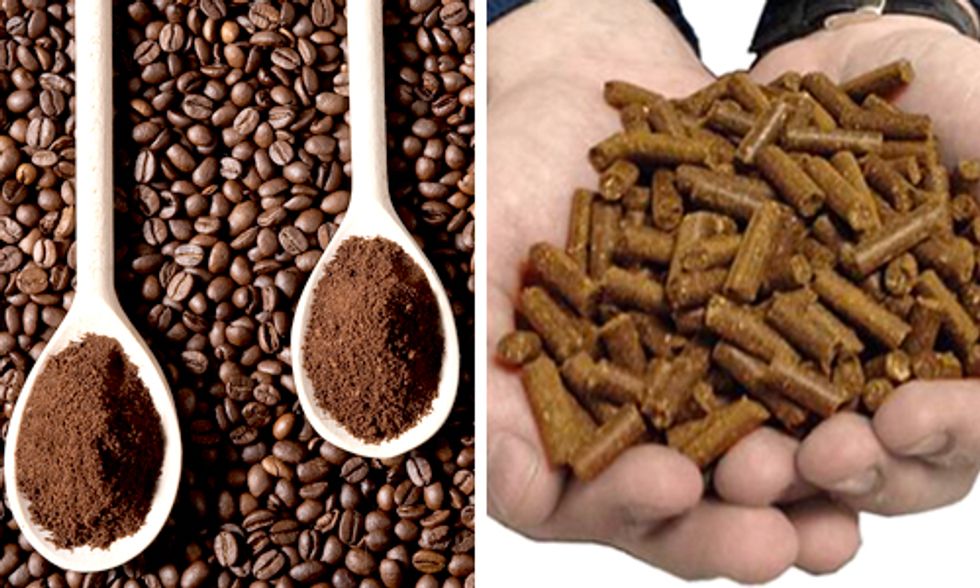 We've seen how coffee cups can turn into trees, but here's another way coffee shop waste can be used as a resource. Bio-bean, a new London-based company, is upcycling coffee grounds into biofuel, which can help power buildings and fuel cars while reducing waste.

"At first mention of recycling coffee grounds, people typically think of collecting a bag of coffee grounds from local shops," Arthur Kay, CEO and co-founder of bio-bean, told Co.EXIST. "The bio-bean process is much more sophisticated; we focus on wholesale instant coffee manufacturers and coffee-waste aggregators."

After collecting the grounds, the company transports it to their processing plant in north London where machines turn these old grinds into biomass pellets and biodiesel in a patented process. This carbon-neutral fuel is then sold to businesses to power buildings and vehicles.

Bio-bean says they can save up to 53,200 barrels of oil a year, or the same as driving a London bus around the world 7,675 times. That’s not to mention that the company uses its own biofuel to power their fleet of trucks that’s used to collect coffee waste.

"Bio-bean uses a cradle-to-cradle business model, which means we use a waste product and turn it into something of value." Kay says in the video. "London produces over 200,000 tons of waste coffee annually. Bio-bean hopes to tap into this resource in order to offset some of London's energy demands."

Coffee shops usually pay to have their grounds incinerated, taken to an anaerobic digestion plants or dumped in a landfill, where it releases harmful greenhouse gases, the company points out on their website. But with bio-bean, coffee grounds go further than giving you your morning fix.

"Bio-bean is aligned closely with the concept of the circular economy," Kay told Co.Exist. "We view waste more as a valuable resource, simply in the wrong place." (If you'd like to give a second life to your own coffee waste, try composting).

After collecting the grounds, the company transports it to their processing plant in north London where machines turn these old grinds into biomass pellets.

Since launching in 2012, bio-bean has won a slew of awards including the Mayor's Low Carbon Prize, a £20,000 award that helped set up the company. London's eccentric mayor Boris Johnson said of the company, "This kind of innovation is brilliant to see—we are 100 percent behind bio-bean, which is full of beans."

Looks like coffee can fuel the world in more ways than one.