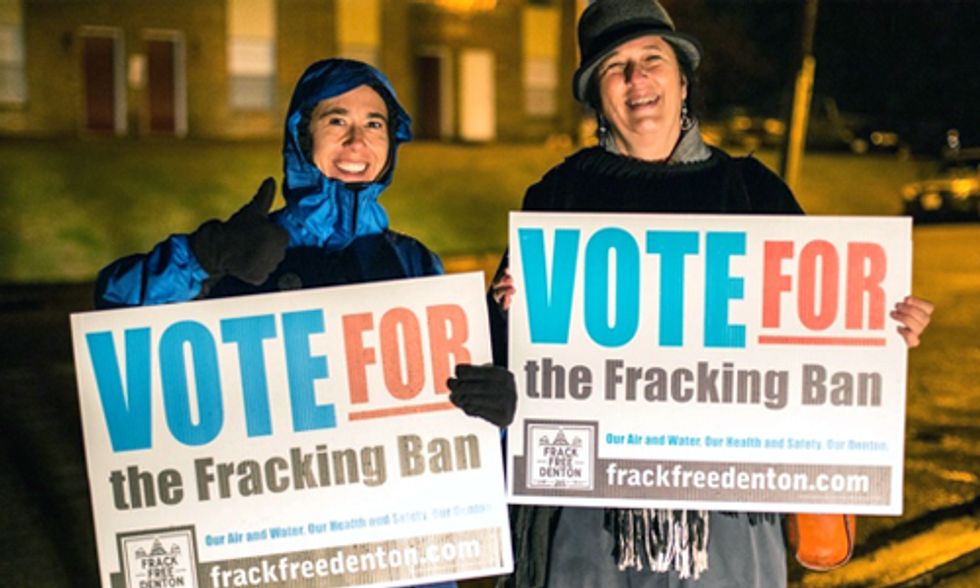 This may be the shortest blog I’ve ever written. On Election Day, voters in a number of cities and counties voted on whether to severely restrict or ban oil and gas development—the oil industry poured millions of dollars in an effort to avoid these restrictions. In Richmond, California Chevron spent $3 million to gain control of the city council; this overreach backfired and Chevron’s slate was trounced. In San Benito County, $2 million wasn’t enough to stop a ban on fracking and other intensive oil extraction technologies. Mendocino County also said “no.” But in Santa Barbara a $5 million oil industry campaign did prevail, as a similar fracking ban was blocked. Drilling bans in three of four Ohio towns voting on the issue also failed.

On election day, Denton, Texas voted to ban fracking inside its city limits, in the heart of the oil patch. Photo credit: Frack Free Denton

But the most interesting result may have been Denton, Texas, which voted to ban fracking inside its city limits, in the heart of the oil patch. Oil industry reactions varied.

The CEO of Chesapeake Energy warned his colleagues, “At least some of the oil companies that drilled the 272 active wells in Denton seemingly turned a deaf ear to community concerns about traffic, well location, and other issues not specifically related to fracking. Cathy McMullen, a nurse who headed an anti-fracking group and got the issue on the ballot said, ‘It [the ban] says that industry can’t come in and do whatever they want to do to people. They can’t drill a well 300 feet from a park anymore.’ Oil companies would do well to take McMullen’s words to heart: ‘If you want to prevent more bans, do yourselves a favor and listen to concerned citizens. Because if you don’t you may wind up reaping what you’ve sown.’”

But this common sense message didn’t resonate with much of the industry. The Texas Railroad Commission blithely declared it would simply continue giving permits in Denton because it didn’t recognize the right of local officials to regulate oil and gas.

And Chris Faulkner, the CEO of Breitling Energy, emailed me this absolutely stunning message:

"The citizens of Denton, Texas have voted themselves into what will most definitely end up as the legal equivalent of a field of quicksand. The ground-rumbling they will hear won't be earthquakes, but the stampede of lawyers running to the area to join in the plethora of lawsuits …

"The real losers here are the citizens of Denton who … now face a future of nothing on their land but tumbleweeds and crickets.”

The next time you read a glossy Chevron Ad, you might remember that Chevron and Breitling are on the same team.