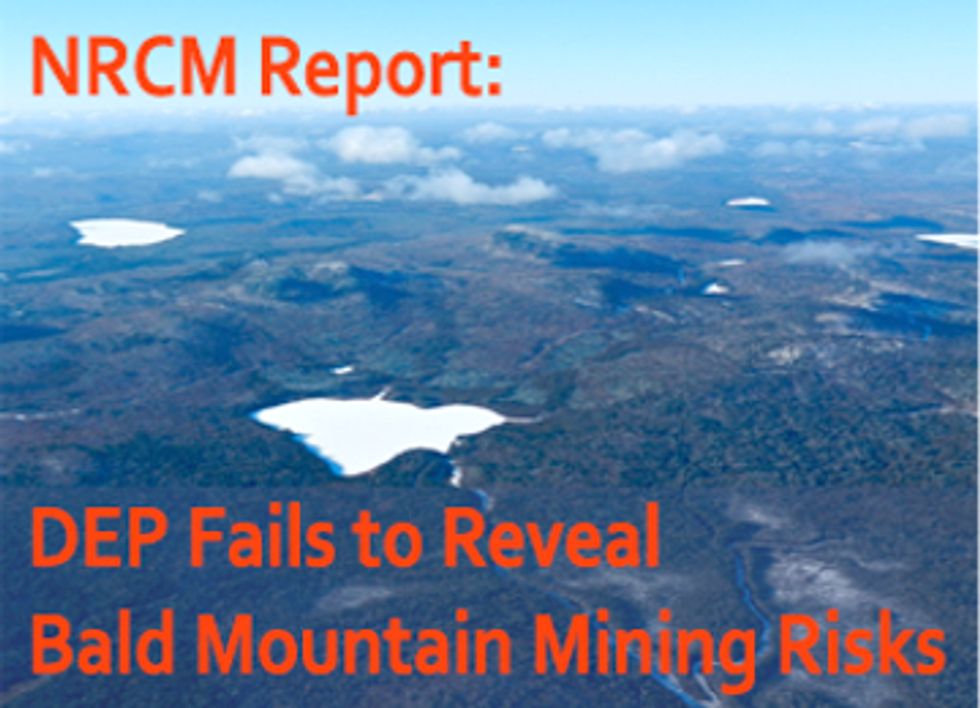 Today, the Natural Resources Council of Maine (NRCM) released an investigative report showing that documents in the possession of Maine’s Department of Environmental Protection (DEP), but not disclosed to Maine lawmakers or released to the public, reveal that an open-pit mine at Bald Mountain in Aroostook County is likely to pollute rivers, lakes and streams with sulfuric acid runoff and arsenic pollution.

The NRCM report, Bald Mountain Mining Risks: Hidden from the Public, draws from consultant studies done for two mining companies that in the 1980s and 1990s pursued the DEP permits for open-pit mining at Bald Mountain. These documents, secured through Freedom of Access Act (FOAA) requests, include multiple warnings that an open-pit mine at Bald Mountain would be very risky. Both companies (Boliden and Black Hawk) ended up dropping their mining plans likely, in large part, due to the problematic nature of the Bald Mountain ore deposit.

“None of this information was brought forward by DEP and shared with lawmakers while they were considering legislation to weaken Maine’s mineral mining rules,” said Nick Bennett, NRCM staff scientist . “Information about the risks of an open-pit mine at Bald Mountain needs to be out in the open, and not hidden in the bowels of the DEP and available only through filing a Freedom of Access Act request.”

Canada-based J.D. Irving, Ltd., wants to pursue an open-pit mine at Bald Mountain in Aroostook County and has been the driving force in an effort to weaken Maine’s mining regulations. Irving has described the project as having a 500-acre footprint with a 100-acre open pit.

The NRCM report shows that technical experts have repeatedly concluded that an open-pit mine at Bald Mountain would be extremely challenging and costly because of high concentrations of sulfur and arsenic. When exposed to air and water, the sulfur forms sulfuric acid (like battery acid in a car battery), known as acid mine drainage (AMD). The acid leaches out heavy metals naturally occurring in the rock, many of which are extremely toxic to fish and other aquatic organisms. These metals can include arsenic, lead, cadmium, mercury, copper and zinc.

Some of the internal DEP documents secured by NRCM were developed for the Swedish mining firm Boliden Resources. Boliden’s consultants found that an open-pit mine at Bald Mountain would likely never be able to meet water quality standards due to the likelihood that acid mine drainage would pollute surrounding waters.

In the mid-1990s, Boliden sold its mineral rights to Black Hawk Mining, Inc., which began the permitting process with the DEP for a much smaller open-pit mine. Documents in the DEP’s files show that DEP’s technical staff believed that even this smaller mine would cause unacceptable risks to groundwater because of high arsenic levels.

The NRCM report also includes assessments from the geologist who discovered the Bald Mountain ore deposit, who has repeatedly stated that an open-pit mine at Bald Mountain would cause major environmental problems.

NRCM also identified information in DEP files that raises serious questions about job estimates being made for a Bald Mountain mine. Boliden estimated about 80-130 jobs for a full-scale open-pit mine at the site, and Black Hawk estimated 75 jobs for a smaller mine. J.D. Irving, however, has claimed that a mine at Bald Mountain would generate 700 “direct or indirect” jobs, a number that is highly suspect when compared with previous job estimates for a mine at Bald Mountain. Irving has refused to release to the public the analysis used for its jobs estimate.

“Mining companies are notorious for underestimating environmental risks and over-promising jobs, and that’s what we’re seeing here in Maine with Irving’s promotion of a mine at Bald Mountain,” said Bennett. “Our report shows that DEP is fully aware that an open-pit mine at Bald Mountain could have huge environmental impacts, with relatively small and short-lived economic returns, yet DEP has failed to share this information with lawmakers and the public.”

NRCM’s report is being released one week before the Board of Environmental Protection (BEP) will hold a public hearing on proposed draft rules developed as a result of the legislation pushed by Irving. The BEP hearing will be held Thursday, October 17, at 9:00 a.m. at the Augusta Civic Center.

The discrepancies with J.D. Irving’s claims about jobs are striking, and DEP should have shared this information with legislators. An open-pit mine at Bald Mountain would have much higher environmental risks and much lower employment prospects than Irving is claiming. This is consistent with what communities nationwide have experienced. Mining companies are notorious for over-promising on jobs and underestimating environmental risks.

1. The committee file for L.D. 1853 includes more than 700 pages of materials, yet DEP did not provide for the record any of the Boliden or Black Hawk assessments that document the risks of the Bald Mountain deposit.
2. Mark Stebbins, Maine DEP. 1990. Inter-Departmental Memorandum Bald Mountain Tour and Presentation/Aug. 30, 1990. Sept. 13, 1990. P. 3
3 .NMM Resources, Inc., Bald Mountain Project, Volume 3, Environmental Impact Report, p. 58.