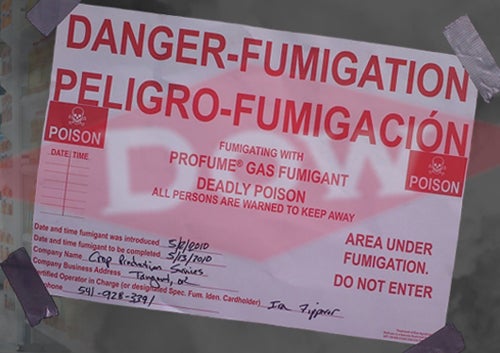 Dow AgroSciences, one of the nation’s largest pesticide makers, along with various food companies, have persuaded several members of Congress to endorse a bill that directs the U.S. Environmental Protection Agency (EPA) to reverse a proposed phaseout of sulfuryl fluoride, a highly toxic food fumigant and potent greenhouse gas. If passed, the bill would make the U.S. one of only two western nations to allow sulfuryl fluoride on food, increase the number of American children ingesting unsafe levels of fluoride and create a food poisoning risk for consumers who purchase food that contains permissible levels of the fumigant.

The Pest Free Food Supply Act, sponsored by Rep. Tom Graves (R-GA) and 14 others, seeks to prevent the proposed phaseout of sulfuryl fluoride from taking effect. The phaseout, which EPA proposed in January 2011, was prompted by a joint petition from the Fluoride Action Network (FAN), Environmental Working Group (EWG) and Beyond Pesticides.

In seeking to prevent the phaseout from taking effect, the bill’s sponsors have adopted Dow’s widely discredited talking points on the safety and necessity of sulfuryl fluoride fumigation. The public should know:

“Before the agricultural processing industry uses its muscles to retain the use of sulfuryl fluoride, it should carefully research what other industrialized societies are using to protect food in processing and storage facilities,” said Jay Feldman, director of Beyond Pesticides. “Some, like Canada, only allow the treatment of empty facilities before the introduction of food products; others use non-toxic methods like heat, refrigeration and carbon dioxide. In the U.S. some of these treatments would require the upgrading of old leaky storage facilities. This would be a far more sensible approach not only to protect our food supply but also to protect our children from unnecessary exposure to yet another toxic substance in their early lives.”

“There is a growing consensus that American children are exposed to too much fluoride, in part because of the use of sulfuryl fluoride,” according to Sonya Lunder, senior analyst with the EWG. “To prevent the adverse health effects of overexposure to fluoride, EPA should finalize its proposal to phase out this pesticide and tackle the issue of fluoride in drinking water.”

“Fluoride is too neurotoxic to be allowed on children’s food and EPA’s pesticide division deserves credit for taking the correct course of action in protecting the health of infants and children, rather than the profits of Dow AgroSciences,” notes Paul Connett, PhD, director of FAN.

FAN, Beyond Pesticides and EWG will vigorously oppose efforts to overturn EPA’s proposed phase-out of sulfuryl fluoride on food, and will fight to uphold the FQPA.

Visit EcoWatch’s BIODIVERSITY and FOOD pages for more related news on this topic.