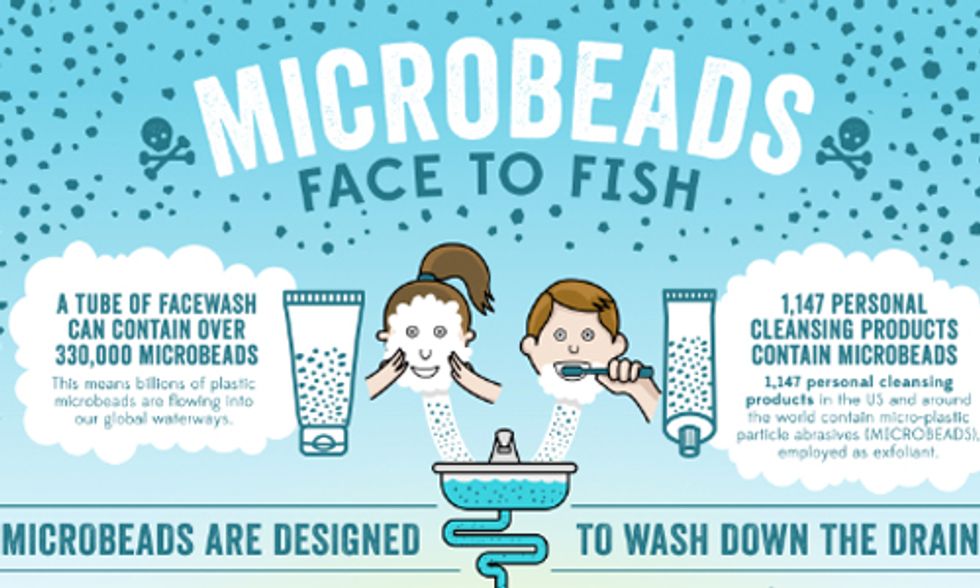 A bill working its way through the California legislature to ban plastic microbeads from cosmetics and other products made and sold in the state has encountered a snag.

The bill, AB 1699, authored by 5 Gyres Institute and sponsored by Rep. Richard Bloom of Santa Monica, sailed through the other chamber of the legislature, the Assembly, in May. That action came a little less than a month before Illinois enacted such a ban in June becoming the first state to do so.

“Passing the Assembly floor is a big milestone for this bill,” Bloom said back in May. “I am proud that my colleagues support our efforts to ensure that our waters are clean. Getting plastic microbeads out of these products will eliminate a significant source of pollution.” Every year 38 tons of plastic microbeads are released into California's environment.

Alas, that will have to wait a little longer. The bill failed to garner the needed votes in the Senate by a single vote, but the sponsors have been granted reconsideration, which means if they can get one of the absentee legislators to vote for it, it will pass the Senate and go back to the California Assembly for concurrence.

According to Marcus Eriksen of 5 Gyres Institute, plastics industry lobbyists worked hard to block it, wanting legislation more like the far from ideal bill that passed in Illinois. The Ilinois bill leaves a loophole for plastic, like Polylactic Acid (PLA) the so-called biodegradable plastic that corn cups are made of. Unfortunately, PLA doesn’t biodegrade in the environment, it requires an industrial composting facility.

"The California bill is up against its first hurdle, explaining to lawmakers that the microbead bill that passed in Illinois is no shining example of good legislation," said Eriksen. "It's more industry-friendy than water, allowing plastic microbeads from fossil fuels to be replaced with plastic microbeads from other feedstock like plants. Chemically speaking it's the same stuff, with the same problems, and doesn't move us away from the status quo. California policymakers are sold bad information by the cosmetics lobby about naturally derived plastics, but without the facts about the environmental harm they cause.

"They’ve even gone so far as to say that our bill in California bans natural alternatives to plastic in order to try to kill the bill, which is an outright fabrication. In rhetoric they tell the press they’re committed to the environment, in practice they’re committed to preserving their bottom line.”

"If this bill fails, we all lose and are stuck with the precedent of a bad bill," said Anna Cummins, 5 Gyres' executive director. "5 Gyres is committed to the end goal—preventing toxic plastic beads from polluting our oceans and watersheds—and we will get there. If not at the state level, then city-by-city, which ultimately will be harder for companies that use plastic beads. We hope the business community will quit playing games with legislators and get serious about stopping the pollution they created."

New York was the first state to propose a microbead ban. New York attorney general Eric Schneiderman introduced the Microbead-Free Waters Act there in February with 5 Gyres, presenting it to the legislature for action; it's currently in limbo. And Ohio State Sen. Mike Skindell has introduced SB 304 which would ban microbeads in that state as evidence mounts of increasing micro-plastic pollution of the Great Lakes. But with the Republican supermajority in the Ohio legislature, the bill is unlikely to even get a hearing, says Skindell.

Unfortunately, that will likely be the same fate as that of a bill to ban plastic microbeads on a federal level, introduced by New Jersey Congressman Frank Pallone, Jr. in June.