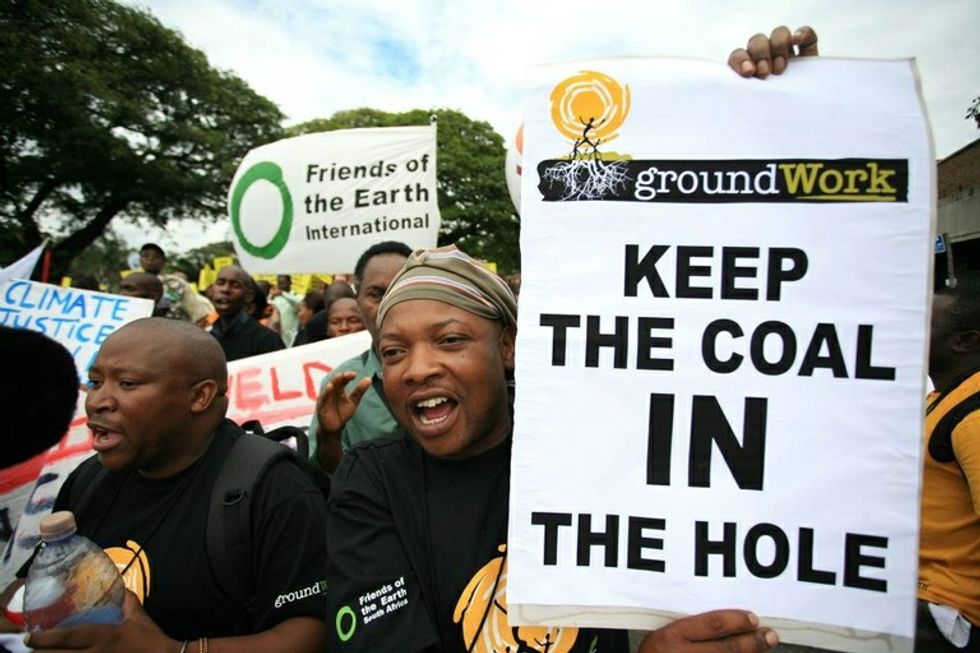 Friends of the Earth International has issued strong warnings against climate inaction at the United Nations (U.N.) climate talks in Durban, South Africa, and blamed industrialized countries like the U.S., Canada, Japan and European countries for seeking to unravel existing agreements under the guise of a new mandate for the climate negotiations.

As global leaders arrived Dec. 7 for the final three days of talks, the international grassroots environmental organization has pointed to the highly destructive agenda of developed countries, including the E.U., which have so far failed in Durban to propose any ambitious emission reductions and any suitable finance and technology support to developing countries.

Friends of the Earth International has called on developing countries to resist the push from the rich industrialized world to tear up existing commitments. A new mandate—which means not implementing existing obligations—would lock in ten years of inaction and set the world squarely on a course for climate catastrophe.

“Rich countries must hear loud and clear that Africa won’t pay for their crisis. Developed countries are trying to kill the Kyoto Protocol. They want to turn back the clock to 1997 and shift responsibility for the climate crisis they created onto the developing countries already bearing the brunt of climate change. Anything less than strong legally-binding emissions reductions for developed countries under a second commitment period of the Kyoto Protocol must be understood for what it is—a mandate to burn Africa and our people,” said Nnimmo Bassey, chair of Friends of the Earth International.

“This talk of a new treaty is a ruse to distract the world from the failure of developed countries to deliver on their existing commitments to cut emissions. We don’t need a new mandate, a mandate already exists. A new mandate will open the door to climate deregulation where polluters continue to pollute, speculators profit from pollution, and the rest of the world carries the burden of the climate crisis,” said Meena Raman of Friends of the Earth Malaysia.

The E.U. has driven the call for a new mandate but it is advancing a wider agenda of rich industrialized countries like the U.S., Japan and Canada to escape from the current system of legally-binding emissions reduction targets for those countries which have caused the climate crisis—and shift responsibility onto developing countries. Meanwhile, countries are using the international climate negotiations to drive forward false and dangerous solutions to climate change like the expansion of carbon trading.

“It is clear what is driving this agenda. More and more countries are coming to the international climate talks with one objective in mind—to defend and advance the economic interests of their polluting industries and multinational corporations and resist the global effort for a strong and fair agreement to tackle climate change. Many civil society groups are calling Durban a conference of polluters. We cannot let the polluters win and lock in a decade of inaction on the climate crisis. Africa must stand strong on behalf of the people of Africa and the people of the world,” said Bobby Peek of Friends of the Earth South Africa.