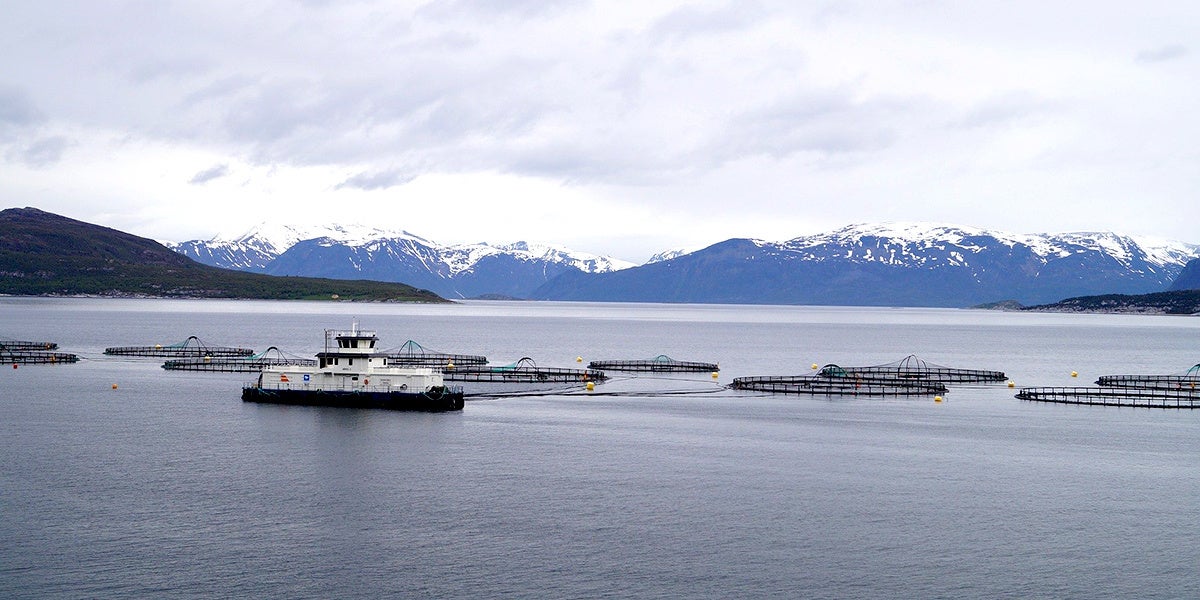 Worldwide, two-thirds of all farm animals are now inhumanely imprisoned on highly-polluting factory farms, fed pesticide- and chemical-contaminated grains and GMOs, often supplemented with contaminated fish meal and oils, and routinely dosed with antibiotics and hormones.

In the U.S., 90-95 percent of all dairy, meat and poultry come from industrial-scale factory farms, while more than half of all fish consumed comes from factory-scale fish farms.

The U.S. industrial agriculture and fishing industry is an out-of-control system based on cruel, filthy, disease-ridden and environmentally destructive animal prisons and fish pens; labor exploitation; false advertising (most food items in grocery stores, and at least one-third of fish items on restaurant menus are falsely advertised); corporate corruption of government; and the use of massive amounts of dangerous pesticides, chemical fertilizers, antibiotics, hormones and growth promoters.

The production of factory-farm meat, dairy, poultry and fish is the number one cause of water pollution, soil degradation, greenhouse gas emissions and chronic diseases such as cancer, heart disease, diabetes, reproductive defects, hormone disruption and obesity.

World Water Day was celebrated globally on March 22. On this day the Organic Consumers Association, along with other public interest groups, sounded the alarm on the seriously degenerated state of our global waters and marine life and called, not only for a change in public policies, but for a consumer boycott of factory-farmed foods, which are number one source of water pollution in the U.S. and around the world.

What a lot of consumers may not understand, however, is that most of the fish sold in grocery stores and served up in restaurants today in industrialized nations is also factory-farmed. For example, one of the most popular fish items on restaurant menus in the U.S. is factory-farmed salmon (along with equally-destructive farmed shrimp).

Factory-farmed salmon and fish not only threaten wild salmon and other marine species by spreading disease (and now GMO-related risks ), but also by contaminating coastal waters and the ocean with the toxic chemicals and feed used on fish farms.

Salmon and other fish farms also pose a major threat to human health. In fact, according to Mercola.com, farmed salmon is perhaps the most toxic food that Americans consume.

Laboratory studies have shown that mice fed factory-farmed salmon become obese and develop diabetes. The likely cause of these diseases, rampant among super-sized humans as well, includes the pesticides and antibiotics that are routinely doused on fish farms, along with the feed that the fish eat, heavily contaminated with PCBs (a by-product in the fish feed), dioxins and other toxic chemicals. Unfortunately, PCBs, pesticides and other toxic chemicals tend to concentrate in the fatty tissues of fish and other animals.

Farmed fish, including salmon, have anywhere from three to six times the fat content of wild fish. This is why farmed salmon is five times more toxic than any other food regularly consumed by Americans.

The now common advice from natural health experts is to avoid all factory-farm fish and larger fish (who have had more time to absorb toxins), and to consume only wild Alaskan salmon, along with smaller fish species, such as anchovies, sardines and herring. For more information on what fish to consume and to avoid, see: https://www.seafoodwatch.org/seafood-recommendations.

Another reason for conscious consumers to stop buying or consuming salmon and other factory farmed fish, as well as other large or endangered ocean species, is because our over-consumption of industrially harvested or farmed fish threatens the food security of more than three billion people across the world. Eight hundred million small fishermen and fisherwomen harvest 25 percent of the world’s fish, struggling to make a living and/or to provide a significant portion of the protein for themselves and more than 3 billion people. The other 75 percent of fish are unsustainably harvested (or produced on fish farms) by large corporations in a supply chain that often wastes or throws overboard 50 percent of the catch.

While 91 percent of fish stocks in the oceans are now over-exploited by industrial trawlers, small fishermen struggle to catch just 6 percent of what their ancestors were able to catch a hundred years ago.

Consumers need to start acknowledging the relationship between our degenerative agricultural and fish production systems and consumption patterns and the other life-or-death problems that we are facing: deteriorating public health; the degeneration of our soils, forests, oceans and surface waters; greenhouse gas pollution and climate destabilization; and the economic justice impact of our consumption habits on the three billion-plus low-income people living in developing countries, and even in the U.S., especially small farmers and fisher people.

Many contemporary consumers have become more conscious—for health, ethical and environmental reasons—about what we purchase in grocery stores or supermarkets. This is why organic and natural foods now constitute more than 10 percent of our grocery store sales in the U.S. Unfortunately, many of us seem to forget about these concerns when we sit down in a restaurant, where we spend, on the average, one-half of all food dollars in the U.S.

We are what we eat. This means, among other things, we need to be just as concerned about fish and seafood as we are about the other items on our plate.

So ask your restaurant waiter if the vegetables are organic, and better yet local and organic, and put your money where your values lie. But don’t forget to ask whether the meat, dairy or eggs are organic or grass-fed, or whether they are coming off the food service truck from factory farms. And last but not least, don’t forget to do the same thing for the items on the fish menu.

The nation that destroys its soil, freshwater and oceans is the nation that will eventually destroy itself. Let’s make every day World Water and Buy Organic Day. Cook organic, not the planet. Buy organic and regenerative food and other products today and every day.

Ronnie Cummins is international director of the Organic Consumers Association.