Micro-Naps for Plants: Flicking the Lights on and off Can Save Energy Without Hurting Indoor Agriculture Harvests 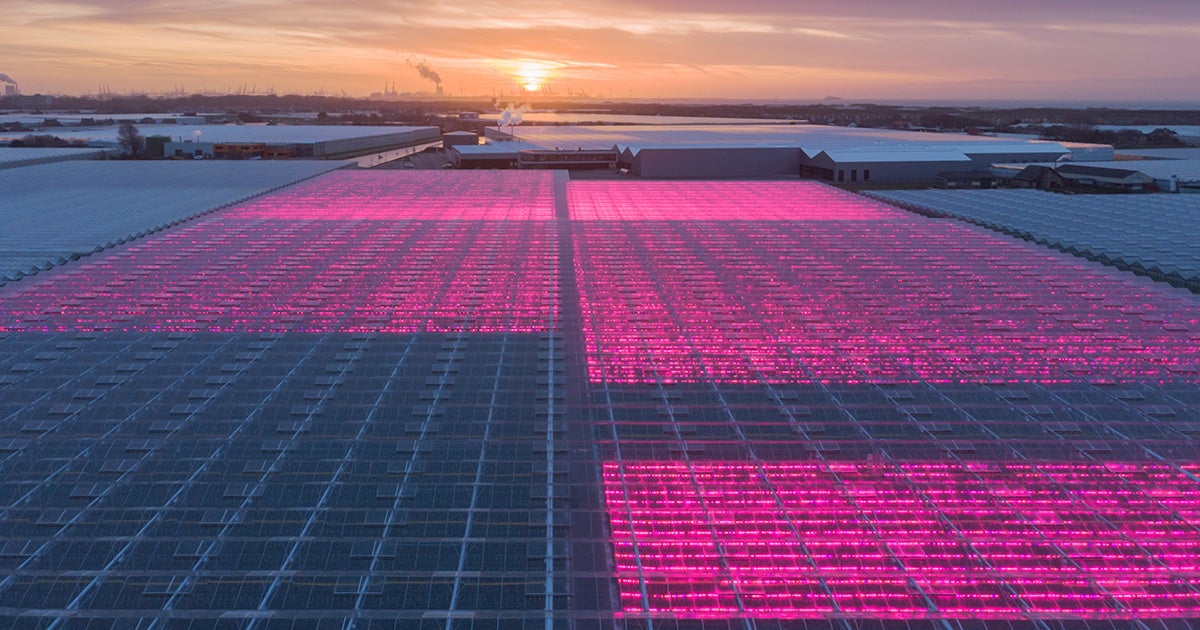 A nighttime arrival at Amsterdam’s Schiphol Airport flies you over the bright pink glow of vegetable production greenhouses. Growing crops under artificial light is gaining momentum, particularly in regions where produce prices can be high during seasons when sunlight is sparse.

The Netherlands is just one country that has rapidly adopted controlled-environment agriculture, where high-value specialty crops like herbs, fancy lettuces and tomatoes are produced in year-round illuminated greenhouses. Advocates suggest these completely enclosed buildings – or plant factories – could be a way to repurpose urban space, decrease food miles and provide local produce to city dwellers.

One of the central problems of this process is the high monetary cost of providing artificial light, usually via a combination of red and blue light-emitting diodes. Energy costs sometimes exceed 25% of the operational outlay. How can growers, particularly in the developing world, compete when the sun is free? Higher energy use also translates to more carbon emissions, rather than the decreased carbon footprint sustainably farmed plants can provide.

I’ve studied how light affects plant growth and development for over 30 years. I recently found myself wondering: Rather than growing plants under a repeating cycle of one day of light and one night of darkness, what if the same daylight was split into pulses lasting only hours, minutes or seconds?

Short Bursts of Light and Dark

So my colleagues and I designed an experiment. We’d apply the normal amount of light in total, just break it up over different chunks of time.

Of course plants depend on light for photosynthesis, the process that in nature uses the sun’s energy to merge carbon dioxide and water into sugars that fuel plant metabolism. Light also directs growth and development through its signals about day and night, and monkeying with that information stream might have disastrous results.

That’s because breaking something good into smaller bits sometimes creates new problems. Imagine how happy you’d be to receive a 0 bill – but not as thrilled with the equivalent 10,000 pennies. We suspected a plant’s internal clock wouldn’t accept the same luminous currency when broken into smaller denominations.

And that’s exactly what we demonstrated in our experiments. Kale, turnip or beet seedlings exposed to cycles of 12 hours of light, 12 hours dark for four days grew normally, accumulating pigments and growing larger. When we decreased the frequency of light-dark cycles to 6 hours, 3 hours, 1 hour or 30 minutes, the plants revolted. We delivered the same amount of light, just applied in different-sized chunks, and the seedlings did not appreciate the treatment.

The same amount of light applied in shorter intervals over the day caused plants to grow more like they were in darkness. We suspect the light pulses conflicted with a plant’s internal clock, and the seedlings had no idea what time of day it was. Stems stretched taller in an attempt to find more light, and processes like pigment production were put on hold.

But when we applied light in much, much shorter bursts, something remarkable happened. Plants grown under five-second on/off cycles appeared to be almost identical to those grown under the normal light/dark period. It’s almost like the internal clock can’t get started properly when sunrise comes every five seconds, so the plants don’t seem to mind a day that is a few seconds long.

Just as we prepared to publish, undergraduate collaborator Paul Kusuma found that our discovery was not so novel. We soon realized we’d actually rediscovered something already known for 88 years. Scientists at the U.S. Department of Agriculture saw this same phenomenon in 1931 when they grew plants under light pulses of various durations. Their work in mature plants matches what we observed in seedlings with remarkable similarity. 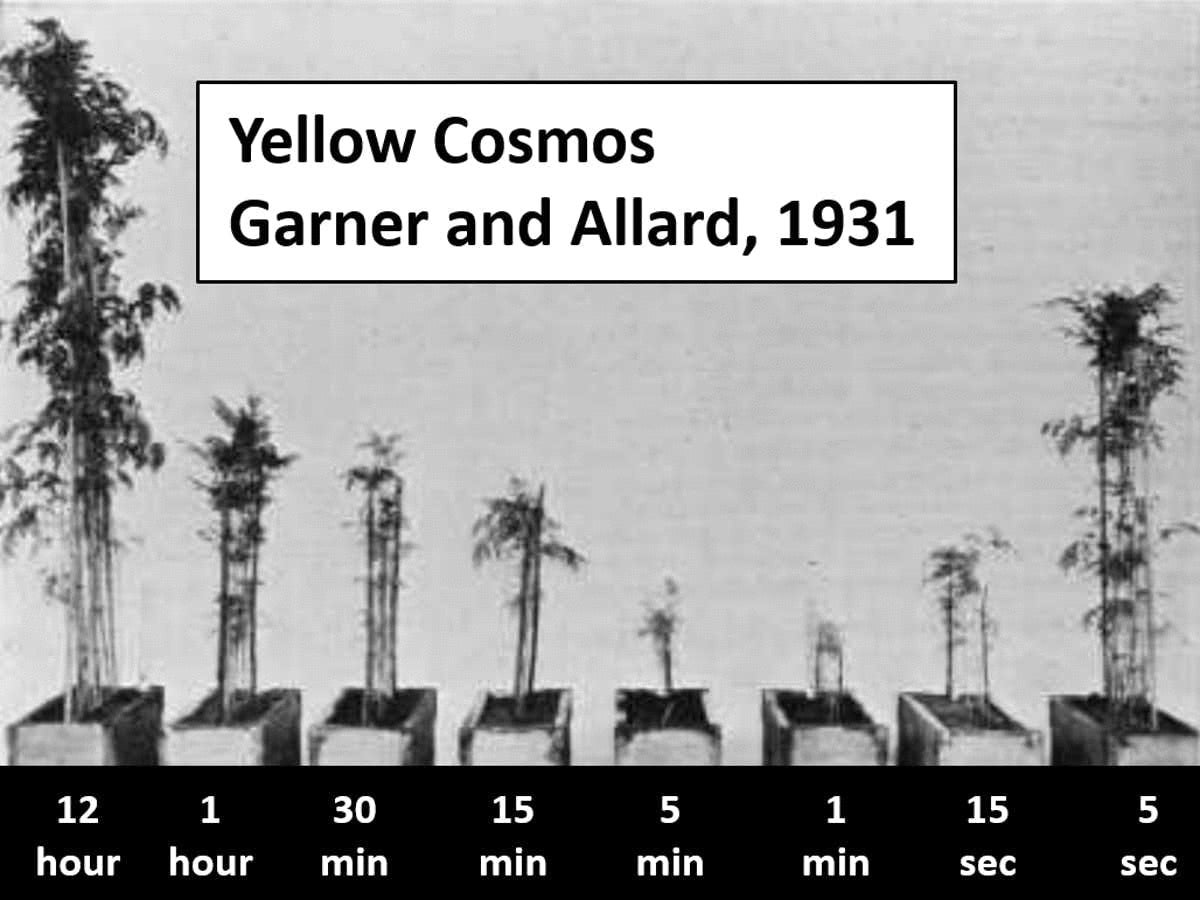 A 1931 study by Garner and Allard tracked the growth of Yellow Cosmos flowers under light pulses of various durations.

Not only was all of this a retread of an old idea, but pulses of light do not save any energy. Five seconds on and off uses the same amount of energy as the lights being on for 12 hours; the lights are still on for half the day.

It turns out that the plants don’t mind a little downtime. After applying light for five seconds to activate photosynthesis and biological processes like pigment accumulation, we turned the light off for 10, or sometimes 20 seconds. Under these extended dark periods, the seedlings grew just as well as they had when the light and dark periods were equal. If this could be done on the scale of an indoor farm, it might translate to a significant energy savings, at least 30% and maybe more.

Recent yet-to-be published work in our lab has shown that the same concept works in leaf lettuces; they also don’t mind an extended dark time between pulses. In some cases, the lettuces are green instead of purple and have larger leaves. That means a grower can produce a diversity of products, and with higher marketable product weight, by turning the lights off. 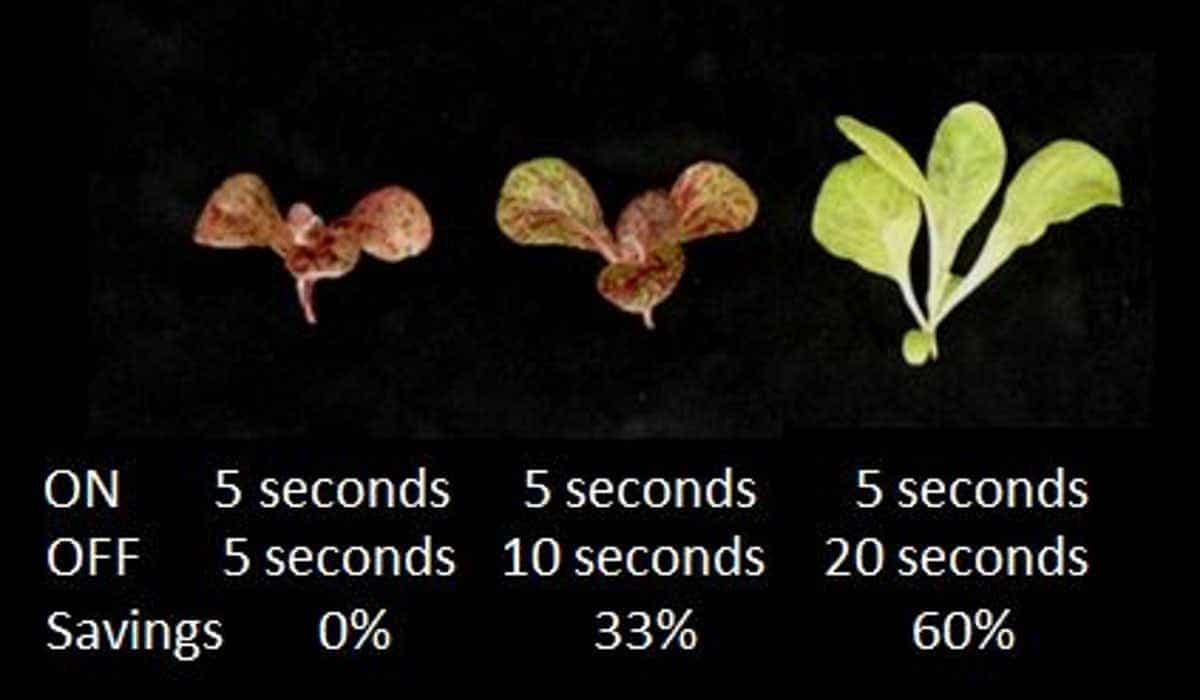 One variety of lettuce grew purple when given a 10-second dark period. They look similar to those grown with a five-second dark period, yet use 33% less energy. Extending the dark period to 20 seconds yielded green plants with more biomass.

Learning that plants can be grown under bursts of light rather than continuous illumination provides a way to potentially trim the expensive energy budget of indoor agriculture. More fresh vegetables could be grown with less energy, making the process more sustainable. My colleagues and I think this innovation could ultimately help drive new business and feed more people – and do so with less environmental impact.

Kevin M. Folta is a professor of horticultural sciences and plant molecular and cellular biology at the University of Florida.
Disclosure statement: Kevin M. Folta received funding from the United States Department of Agriculture National Institute of Food and Agriculture and Vindara Inc to work on questions in agricultural lighting. He is affiliated with Eggsotics Eggs and Produce where his family grows some direct-market produce under hydroponic and/or artificial light conditions. He is reimbursed for travel related to talks in research and science communication. A full list of prior research funding may be seen at www.kevinfolta.com/transparency.