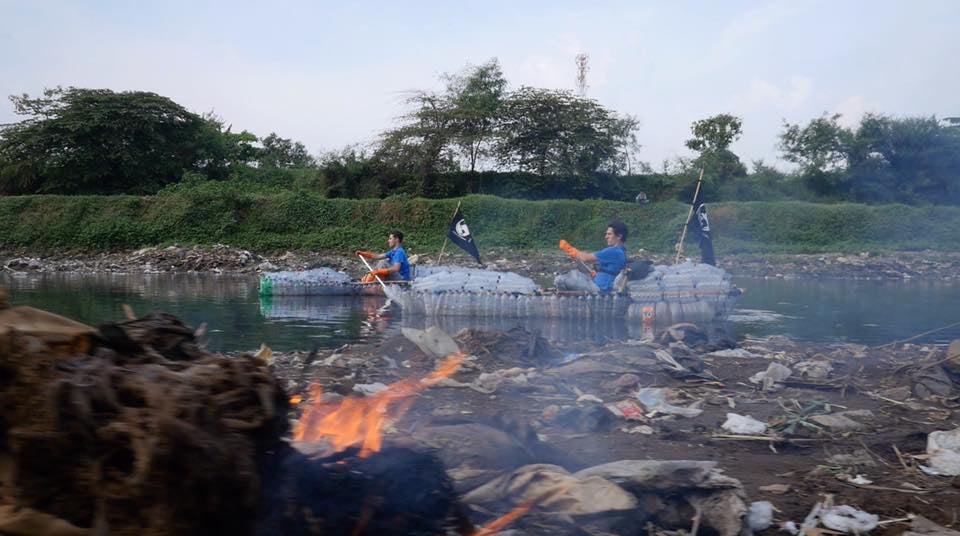 On August 14, we set out to kayak down the world’s most polluted river, the Citarum River located in Indonesia, to document and raise awareness about the highly toxic chemicals in its waters and the masses of plastics floating on its surface.

We paddled a total of 68km in two weeks on two plastic bottle kayaks from the village of Majalaya, located just south of Bandung to Pantai Bahagia, the river mouth at the Java Sea. Each kayak was made of 300 plastic bottles to demonstrate that trash can have a second life.

Throughout the expedition, we released videos documenting our journey and spotlighted community-based initiatives and individuals who work tirelessly towards restoring the river.

These groups include Bening Saguling Foundation led by Indra Darmawan, Ibu-ibu bersih, Pak Sariban and Jurig Runtah. After completing our descent, our videos were watched by hundreds of thousands online and eventually reached the Indonesian Government. Last Friday in Jakarta we met the Director of Waste Management under the Ministry of the Environment (KLHK), R. Sudirman. During this meeting R. Sudirman announced an emergency plan to clean up the Citarum River as a response to our campaign and videos.

For the next 4 months, Sudirman and his team will be surveying the river and creating a road map of the most polluted parts of the river. His goal is to work hand-in- hand with the 13 City Mayors along the Citarum River, the Provincial Head and the Governor of West Java.

From the moment we stepped foot inside our kayaks, we were completely submerged in trash. At times the water would turn into shades of red, blue and black as a result of the hundreds of textile factories that dump lead, mercury and other chemicals into the river. The industrial and domestic waste prompted environmental groups Green Cross Switzerland and the Blacksmith Institute to name it as one of the world’s 10 most polluted places.

Although it seems impossible to clean the river after all the destruction its been through, we are very grateful to have the Indonesian government’s support in restoring one of the country’s most important rivers for the 15 million people that depend on it.