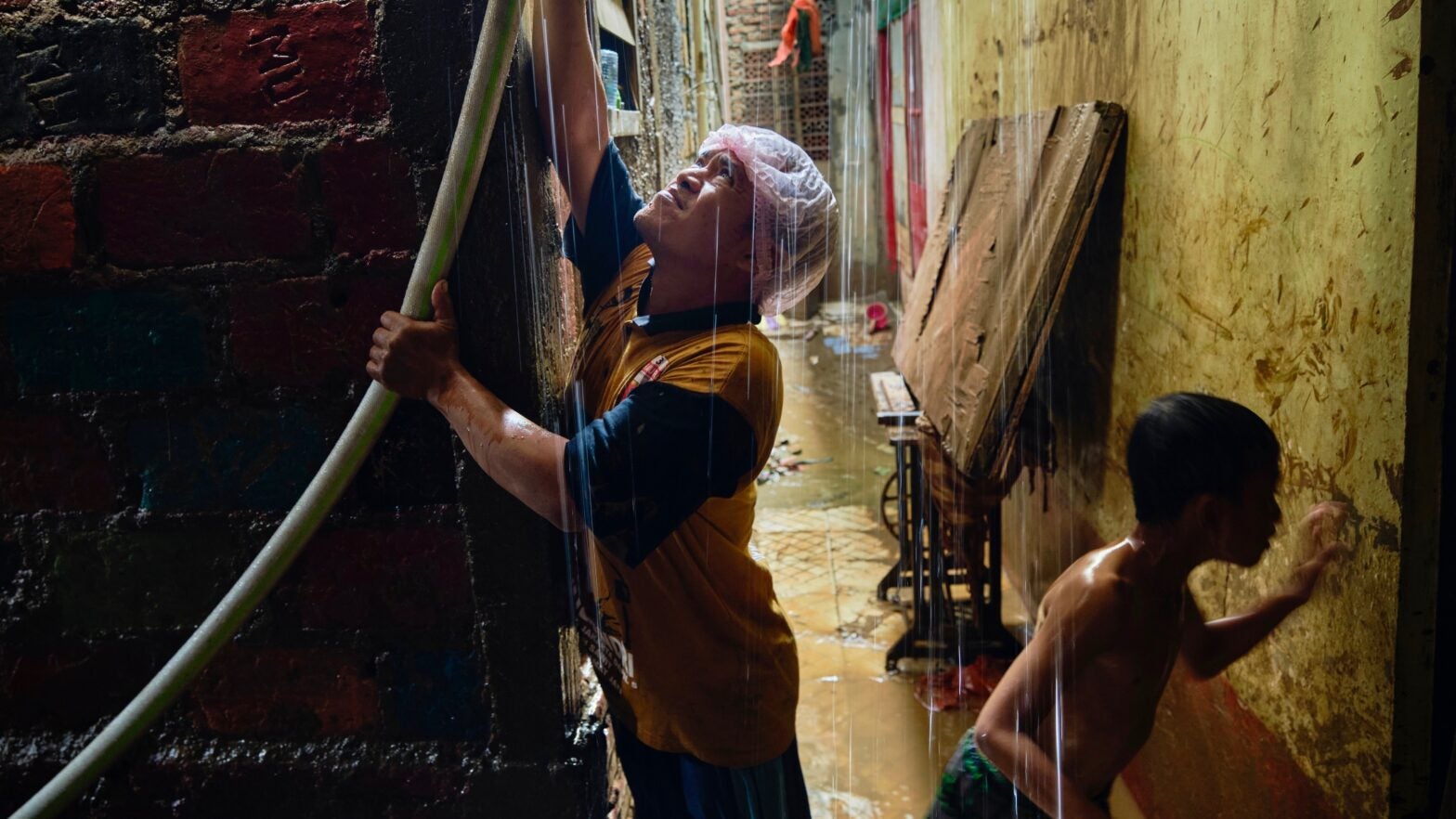 An Indonesian man pumps water up to the second floor of a house to wash away the mud in a flooded neighborhood on Jan. 3 in Jakarta, Indonesia. Ed Wray / Getty Images

After nearly 15 inches of rain fell in one day and caused flash floods and landslides in Jakarta, the Indonesian capital, that destroyed 60,000 homes and killed at least 43 people, the Indonesian Air Force sent two planes to drop salt on approaching rain clouds to break them up before they reached the city, according to Reuters.

The slowly sinking capital that is crumbling into the Java Sea has started the new year with a humanitarian crisis as tens of thousands of people were displaced and over 190,000 were evacuated by the sudden deluge on Dec. 31, 2019.

To stave off further damage, Indonesia’s technology agency BPPT teamed up with the air force to carry out three rounds of cloud seeding earlier today, with more expected when needed, a BPPT official said, as Reuters reported.

“All clouds moving towards the Greater Jakarta area, which are estimated to lead to precipitation there, will be shot with NaCl (sodium chloride) material,” Indonesia’s technology agency BPPT explained in a statement, as the BBC reported.

The two small planes dropped salt on rain clouds above the Sundra Strait. A larger plane was loaded and on standby if more rain clouds approached the city, according to the Guardian.

Indonesian authorities often use cloud seeding or salt flares into clouds to try to catalyze rainfall to help put out forest fires during the dry season, according to the Guardian.

“We will do cloud seeding every day as needed,” said BPPT chief Hammam Riza to reporters, as Reuters reported.

Indonesia’s president, Joko Widodo, who last year announced that the capital would move to East Kalimantan on Borneo to help relieve Jakarta’s overcrowding, blamed stalled flood control infrastructure projects for the disaster. Meanwhile, authorities are using hundreds of pumps to try to suck water out of residential areas and from public infrastructure like roads and railways, as the Guardian reported.

[Read why Indonesia will move its capital from fast-sinking Jakarta.]

However, even in areas where the water has receded, mud and debris have prevented people from returning to their homes, according to the BBC.

Jakarta regularly experiences flooding during the rainy season, which started in November. This week’s flood was “one of the most extreme rainfall” events since records began in 1866, the Meteorological, Climatological and Geophysics Agency (BMKG) said on Friday, as Reuters reported.

The agency said the climate crisis had increased the risk of extreme weather and warned that heavy rainfall could last until mid-February, with Jan 11-15 an expected peak, according to Reuters.

This week’s flooding is the worst since 2013 when dozens were killed by overflowing canals when monsoons struck the city. More than 50 people died in floods in the capital in 2007, as Reuters reported.

“This year’s flooding was phenomenally bad because of the extremely high rainfall,” said Yayat Supriatna, a Jakarta-based urban planning expert, as the AFP reported.

VIDEO: 🇮🇩 Hundreds of people displaced because of severe flooding in the Indonesian capital #Jakarta hold Friday prayers, after 43 people were killed in landslides and floods across the Jakarta region pic.twitter.com/iSHtNYT7AG

He added that Jakarta’s many infrastructure problems, including poor drainage and rampant overdevelopment, worsened the situation.

“Yes, the weather conditions were terrible, but this was exacerbated by awful urban planning,” said Supriatna.

Authorities said 17 died in floodwaters, while 12 were killed in landslides. Several people died after coming into contact with downed live electrical lines and from hypothermia. As a precaution, officials turned off the electricity in many districts in Jakarta as a precaution, according to the UPI.