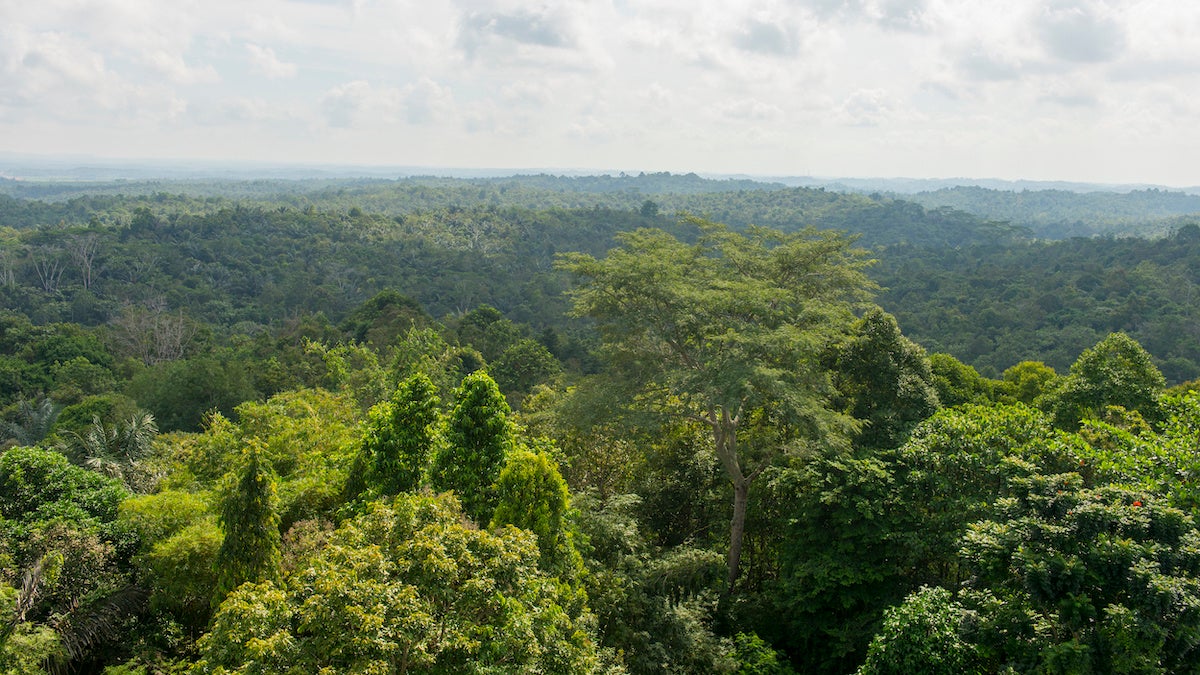 A regenerated rainforest at Samboja near Balikpapan, on Kalimantan, Indonesia on May 20, 2019. Wolfgang Kaehler / LightRocket via Getty Images

It may be surprising that a universal basic income would also help the environment, but that is exactly what a new study found. A government program to help poor, rural Indonesians through direct cash payments had the unexpected effect of reducing deforestation by 30 percent in participating villages, according to a new study, as Newsweek reported.

The program that Indonesia started, Keluarga Harapan program, or “Family Hope” program, which provides direct cash transfers to low-income households to bring them above the poverty line, had no intention of helping the country’s forests, which have been slashed down at a remarkable rate.

Instead, the program gave families money if they met certain conditions, like attending regular doctor visits, keeping kids in school, and participating in health and nutrition training. While conditional cash transfers are used in several countries around the world to alleviate poverty, they are not viewed as an environmentally friendly action, according to Science News.

That’s because economic growth is often correlated with environmental degradation. But, that’s correlation, not causation.

The new study, published in Science Advances, examined the habits of 266,533 households in 7,468 rural villages across 15 provinces on multiple islands between 2008 and 2012. The researchers then compared where the cash was distributed to satellite images of forests during the same timeframe. That’s when they noticed that forests where the government was making payments were faring far better than other regions of Indonesia.

“For decades, people have been debating whether alleviating poverty and protecting the environment are at odds with each other. Resolving this debate is important because lots of poor people are found in the same areas where we find the most endangered ecosystems, like the rainforest,” Paul Ferraro, an author of the study from Johns Hopkins University, told Newsweek.

Saving Indonesia’s forests is crucial for the health of the planet and wildlife. The forests are home to a diverse range of species and are efficient at capturing carbon. However, forest destruction is responsible for 10 percent of human carbon dioxide emissions, and much of it is the result of extreme poverty, as Bloomberg reported. For rural villages, selling timber and clearing land for cultivation is often an income stream of last resort.

Indonesia is home to the world’s third-largest tropical forests, but it’s also the top global producer of palm oil, which generates millions of jobs but is blamed by environmentalists for forest loss and fires, according to Reuters.

Not only does Indonesia suffer from troubling rates of deforestation, it also has terrible income inequality. According to Global Forest Watch, Indonesia had the third-highest rate of rainforest loss in the world in 2019. It also saw the divide between its richest and poorest citizens grow faster than any other country in Southeast Asia over the last two decades, and now has the sixth-largest wealth inequality gap in the world, according to Oxfam International, as Mic reported.

“No matter which way we looked at it, the anti-poverty program on average leads to reduction in deforestation in the villages receiving it,” said Ferraro, as Reuters reported.

The researchers suggest their results may spill over to other countries in Asia that have similar experiences, such as cutting down forests to grow rice as a supplement to a poor harvest. They also say that their study shows that’s what’s good for people is also good for the environment.

“The value of the avoided deforestation just for carbon dioxide emissions alone is more than the program costs,” said Ferraro, as Science News reported, adding that the economic benefits of saving the forests justify the intervention.