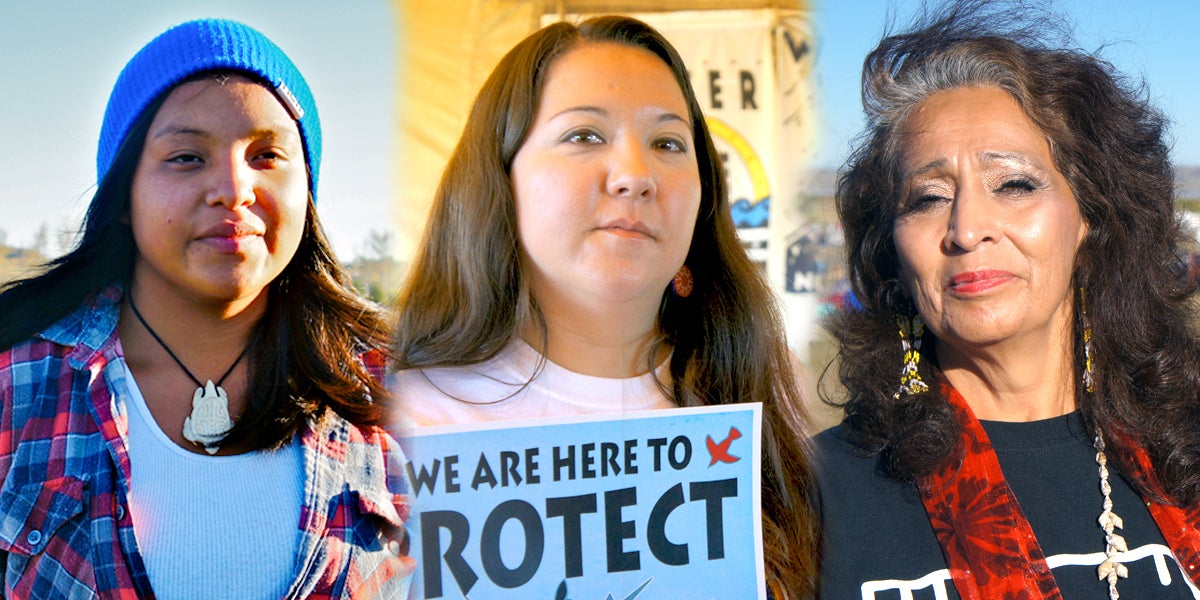 Indigenous women from across North America stand on the frontline of ongoing action to halt construction of the Dakota Access Pipeline. They stand to protect the Earth, water, global climate, and the sacred sites, Indigenous rights and communities of the region. 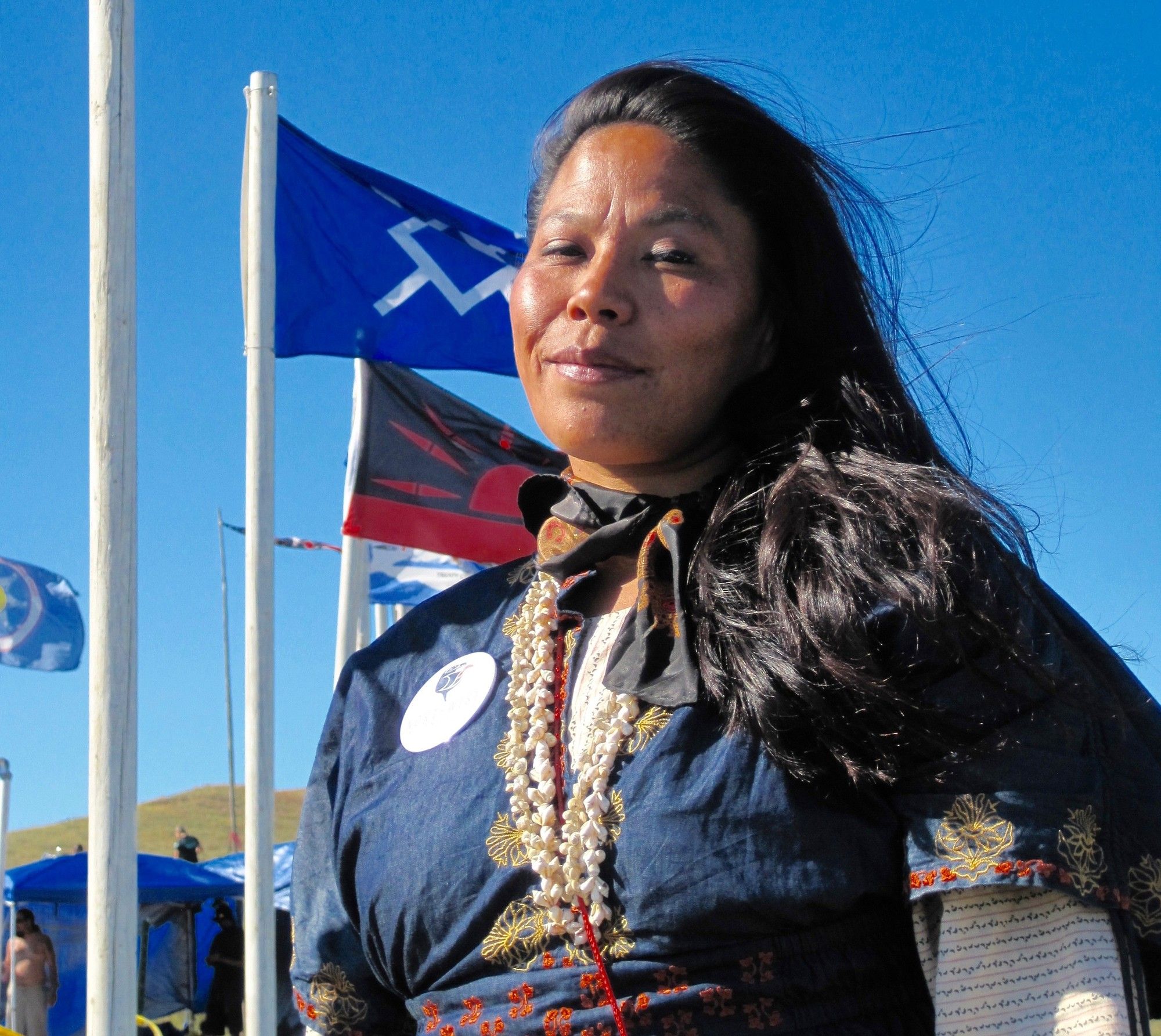 “It is so important for us all to stand with Standing Rock and help them succeed in stopping this pipeline, because this is not just about Standing Rock, this is about all nations around the world, including the non-natives, this affects everyone from East to West.” — Smiles for the People, Rosebud Sioux Peoples of South Dakota

Since early 2016, the Standing Rock Sioux Tribe, and hundreds of Indigenous Nations and allies have been resisting the construction of the $3.7 billion-dollar pipeline, which would transport 470,000 barrels of oil every day and threaten massive damage to the land and the waterways, including the Missouri River, which serve as the source of the Standing Rock Sioux’s drinking water, and which flow to millions of downstream residents across the U.S.

In recognition of the central role played by Indigenous women in the resistance effort, the Women’s Earth & Climate Action Network, International (WECAN) interviewed women leaders of Standing Rock and allied Indigenous Nations, recording their experiences, visions and calls to action for social and ecological justice. Their voices are critical not only for the wisdom, solutions and pointed analysis that they offer, but also because of the direct, violent impacts of the fossil fuel industry that are often borne disproportionately on the bodies of Indigenous women.

With conviction and care, the women convey that protecting water and sacred places has always been their traditional role as women, and they are taking a fierce stand to ensure a healthy life for generations to come.

The women also express that this is not just a fight to stop dangerous fossil fuel infrastructure and ensure the protection of water—it is also the culmination of ancestral prophecies, and the extraordinary next step of an Indigenous rights movement that has been building in this country for decades and generations.

Women on the frontline also decry the rapidly escalating militarization and abuses of local law enforcement, which has included the use of attack dogs, mace, intrusive surveillance and physical violence against those involved in ongoing non-violent direct actions based in traditional prayer and ceremony. 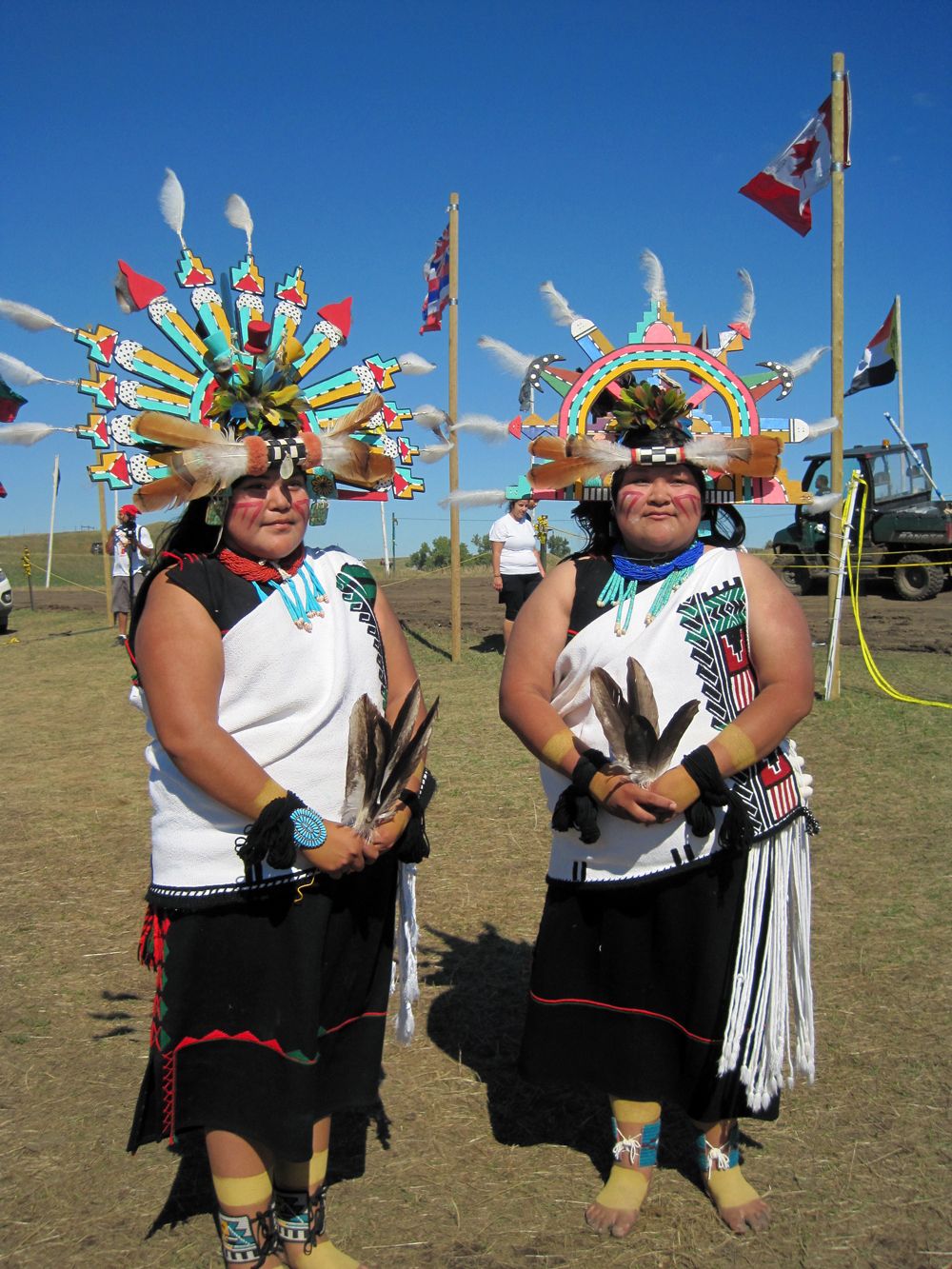 I am here joining the peaceful protesters here at the Standing Rock Sioux Reservation to be a part of all of this, to show my support for my brothers and sisters, and to spark inspiration and motivation in my generation to get out there and embrace their heritage, embrace who they are as people, to show my community that they too do have a voice and their voice does matter. It is a beautiful thing to be here and see all the Nations reunited, together as it should be. 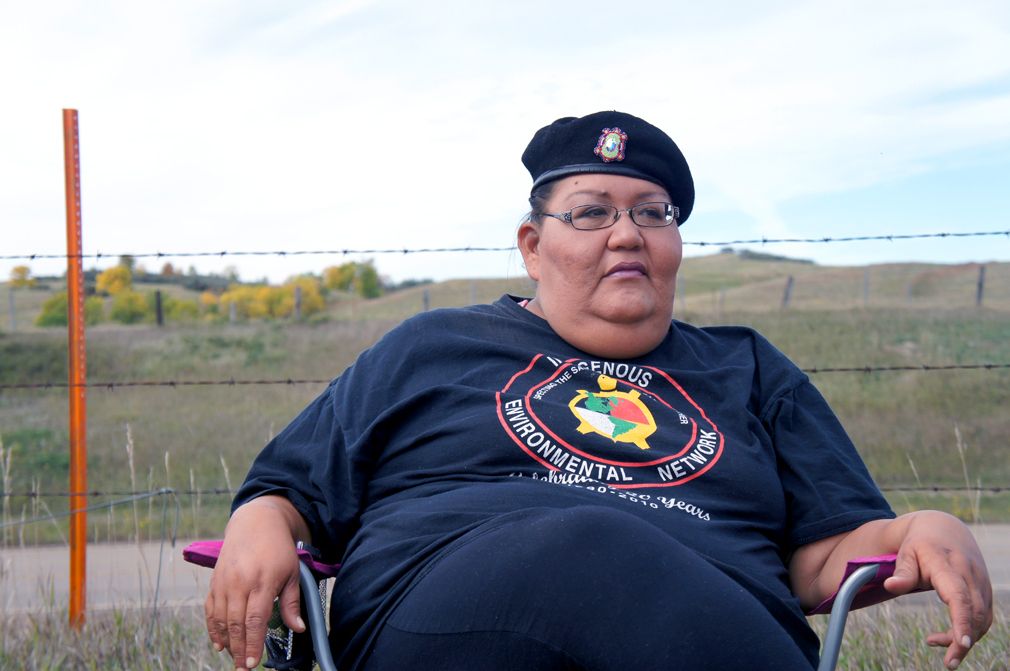 On April 1st, I helped put out a call for other pipeline fighters, and cousin answered the call and me and my cousin became the first two campers at Sacred Stone Camp … When we were down fighting Keystone XL, my daughter, she had this huge epileptic seizure … and when she came too, she told us what she had seen, and what she saw was these black snakes that were coming across the land, and that we were going to chop the head off of one of them, but once we chopped the head off of that one, others would pop up, and we had to be ready. And she said that the women were going to be in front of this fight, women were going to be standing in the front in red shawls … and you see that happening here … we have to be ready to fight them, and we have to to take everything that we learned and teach elsewhere. 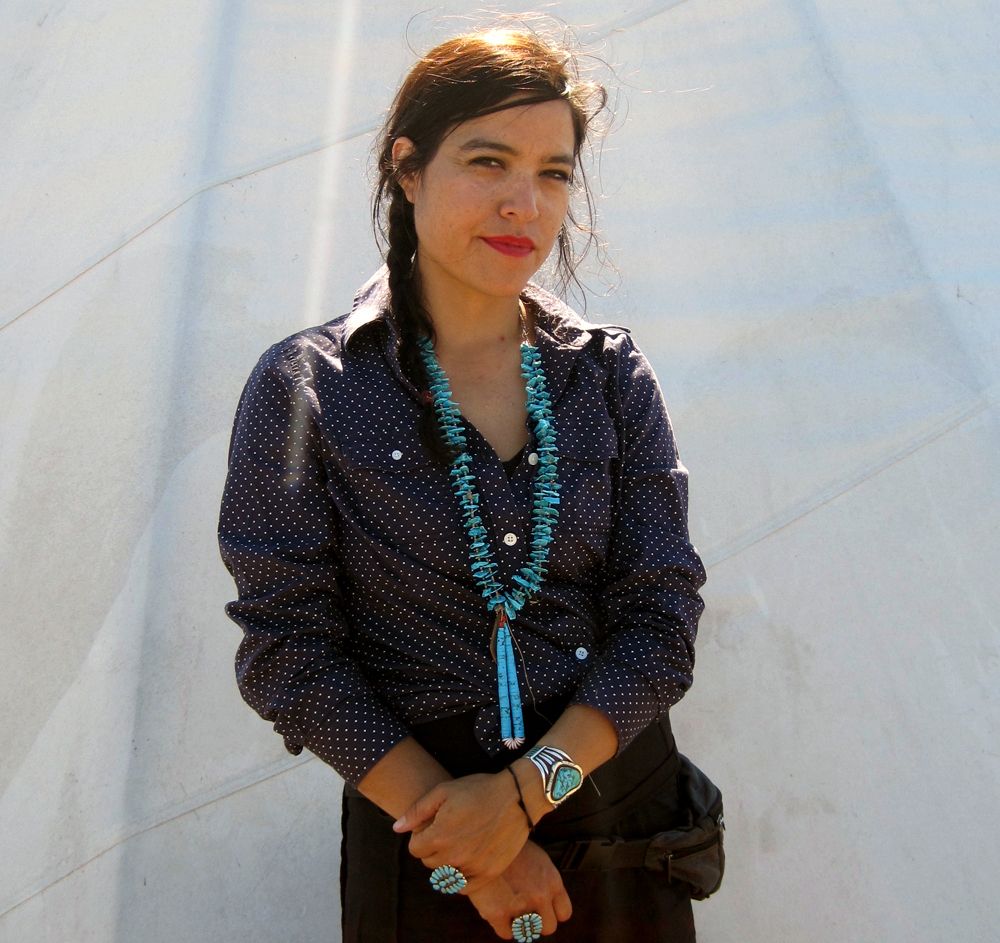 We are fighting the Dakota pipeline, but we’re also fighting the whole system of violence. The whole system which has called us savages. Which has denied us our ability to be human—and we’re responding to that by creating a community that has it’s own values. That respects its women. That gives its children priority. That will teach its children the traditional knowledge of life, that will give them life … When I saw the young women crying out for help, I said I have to be there because I’m not going to watch these people be desolated for the greed of a corporation that does not love this land, that is not part of this land. That’s the beautiful work that we’re here for. … When we have natural resource development which is unsustainable, which threatens the very life of human beings and the natural world, we say absolutely no, it’s unacceptable. We deserve better than that. We’re not going to let the future of America, the future of Turtle Island to be robbed and taken and stolen from us. 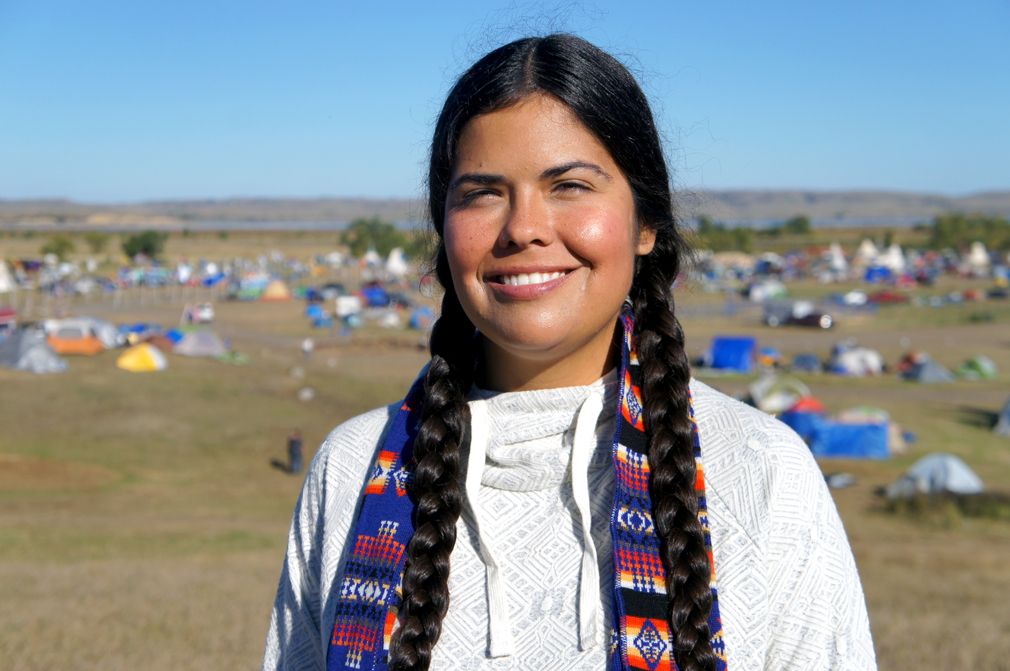 I came to Standing Rock when I heard a call out for help, to protect the water and to stop this destructive project from going through these people’s homelands. I came here to stand with my Indigenous relatives for something that is much larger than just a single project. We want to stop this project but we also want to take a stand and say, ‘no more’. Enough is enough. Indigenous people have been targeted for far too long and we’ve had to give up everything. We’ve been targeted for our homelands, for our children, for our language, for our culture—and what little we have left, what remnants we have left is now being threatened with contamination and destruction and our children are still targeted, and it needs to stop. And so I am hopeful that when we stop this project, it will be a moment in which people will realize that Indigenous nations are here, and we are sovereign, and we are not going to tolerate the conversation as it is today. 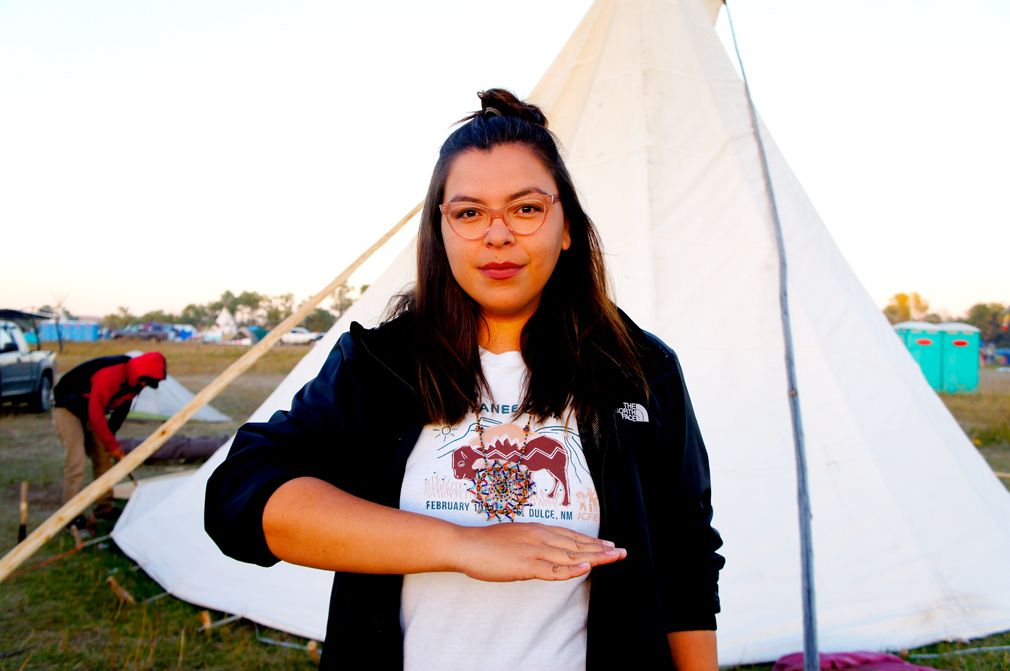 I had a dream about two months into being here, that my grandma who has passed away asked me for a glass of water – and when I went to give her the glass of water, it was full of dirt and oil. And she kept trying to drink it, and I was just so desperate to get her some water, but I couldn’t find any anywhere, and I was really worried that if I didn’t step up and do something to help protect the water, that we wouldn’t have it anymore—I was seeing myself down the line without it.

And so I am here, taking part in this movement that everyone needs to be part of … We will stop the Dakota Access pipeline—and this will continue outside of Standing Rock—and that is something that I deeply hope and know will happen. 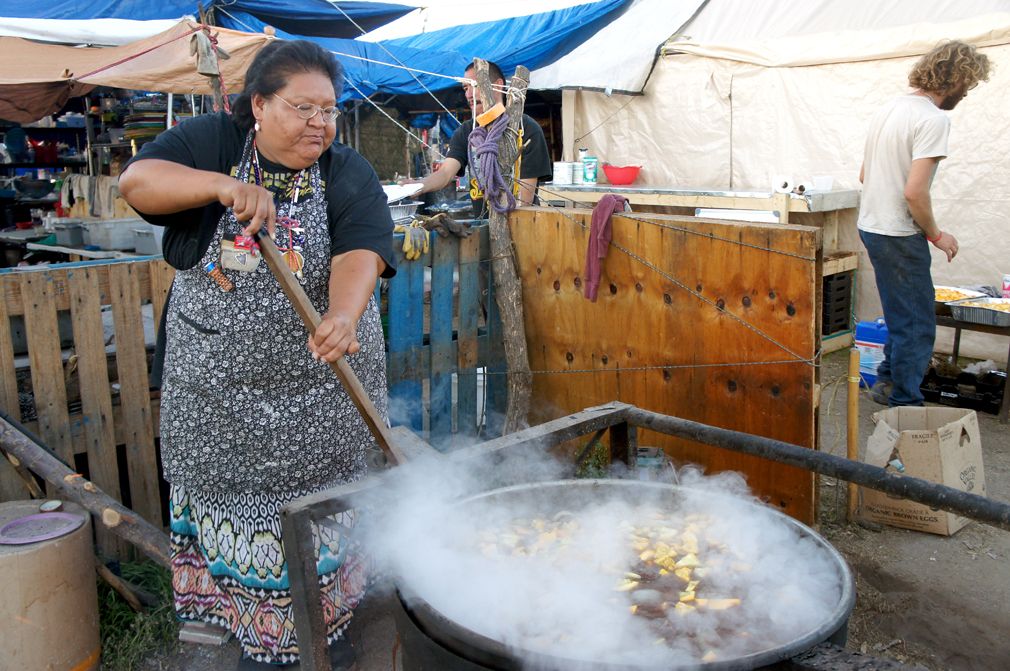 I am a traditional cook for Lakota peoples and I’ve been cooking for about thirty years. It’s always so important for me to be here, to be there for the people, the people we must feed to stay strong, so they can stay here and do the work they are doing for us all. 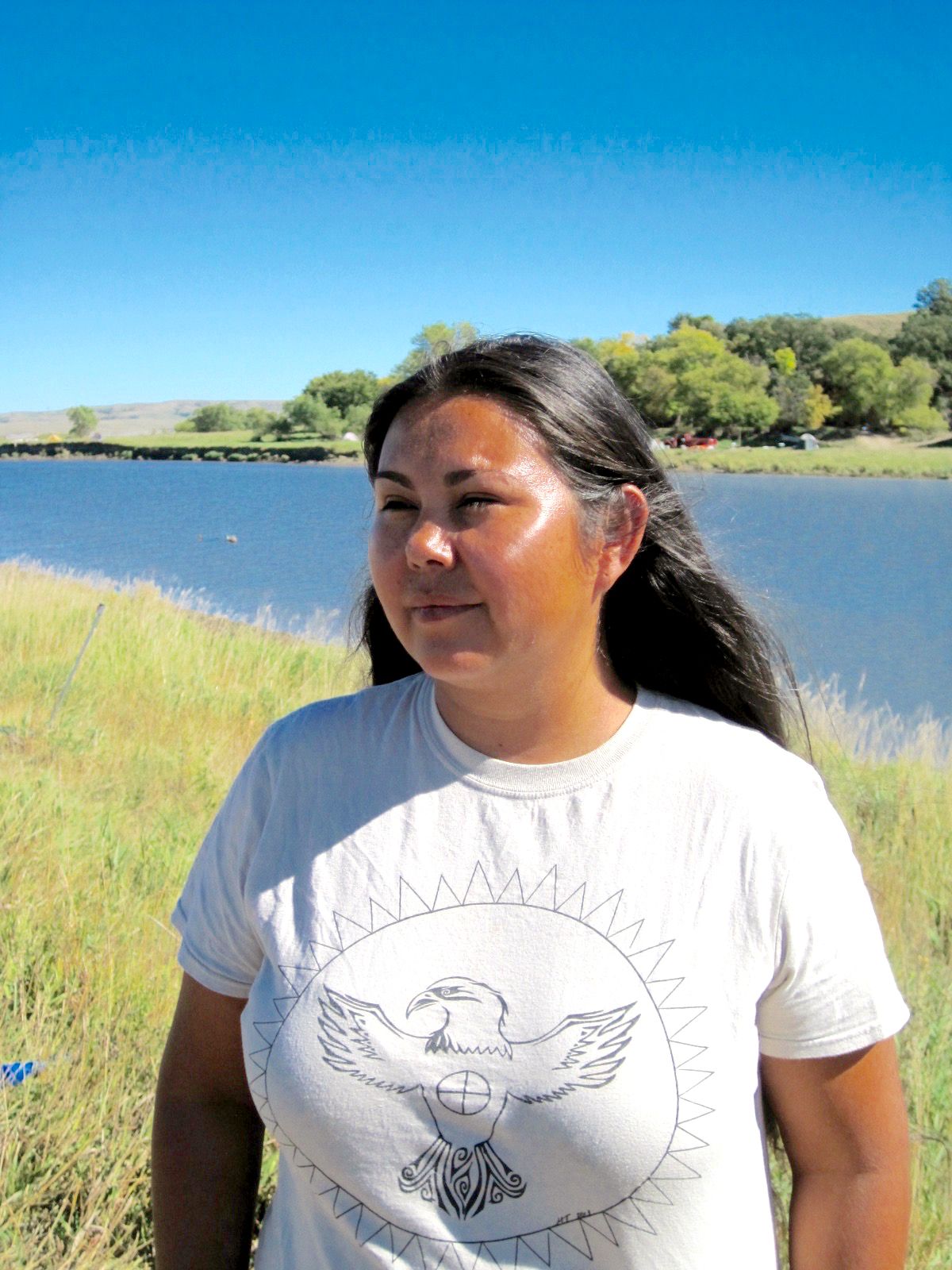 We are here, with the frontline defenders, with the women, with the women that are holding the line … with a woman who is facing felony charges, all because she is standing for her children, who are here at the camp. All of us here are here for our future generations, so that we will have clean water. 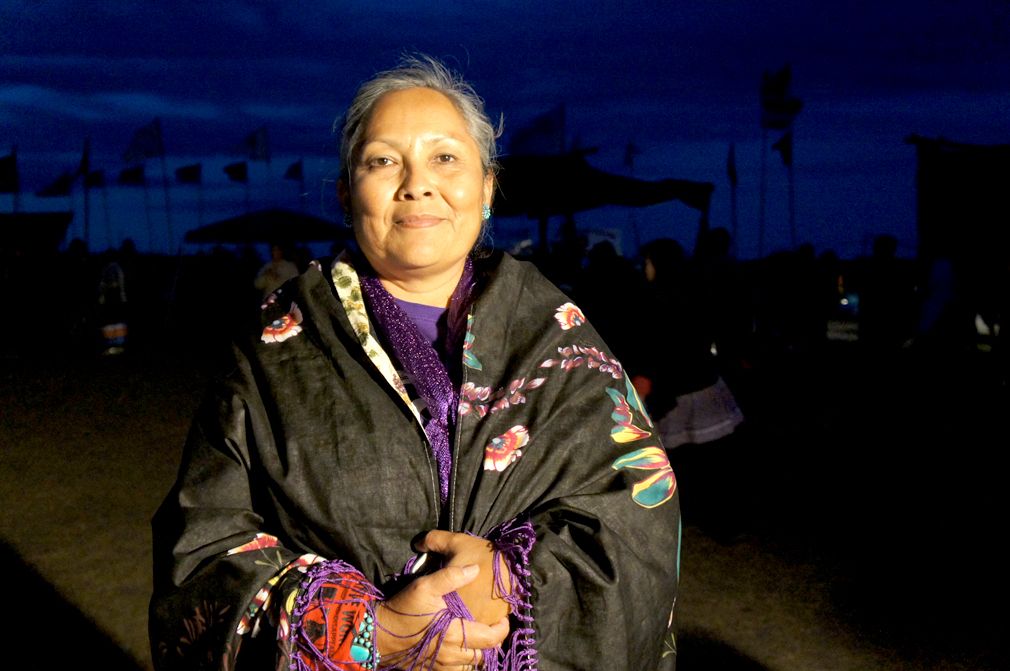 We are, as tribal peoples, connected to our lands, to our culture, to our languages. As women, we are life givers, we are nurtures within our communities, and have such a strong connection to Mother Earth as well. Violence against Mother Earth is violence against our women. And, that is part of what we stand for. Trying to end the violence—sexual and domestic violence, and also making that connection to Mother Earth, to the water, to our lands and to us as people. We are uniting against all of the pipeline industry—all of the extraction that is happening against our Earth, our women, our girls, our boys, our men. We are here to provide our support and to stand together as women in the movement, and with all of our relatives here. 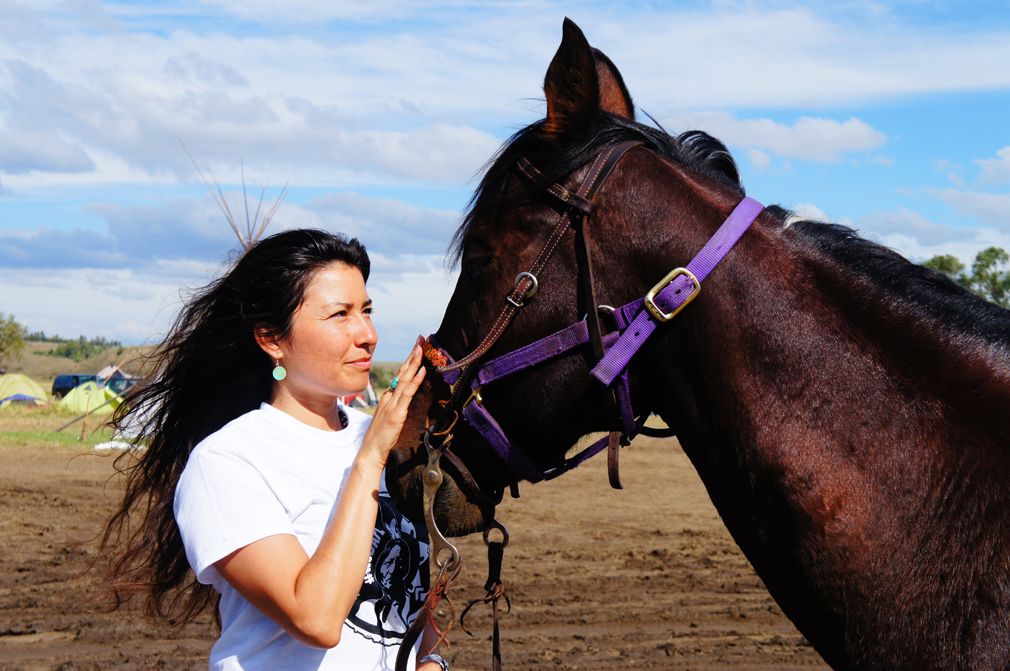 As Indigenous people we know that water is life, we know that we come from the water, the first environment is this water, and the women carry that. We carry that water inside of us. And this is about this to, this is about connection. … We have to listen to our core, our core responsibilities as humankind, let us honor ourselves, let us honor each other, let us take care of ourselves as we take care of the world around us. … There is a prayer that has been laid down here and it’s not just for our generation, is for the next generations, and so we carry that, we carry that forward for healing and wellness for the Earth. And we are not being asked to do this alone, it is time for all people of all nations to wake up and listen to the water. Water is life.

Osprey Orielle Lake is the founder and executive director of the Women’s Earth and Climate Action Network (WECAN) International . She is the author of the award-winning book Uprisings for the Earth: Reconnecting Culture with Nature. Follow on Twitter @WECAN_INTL.

Emily Arasim is the Communications Coordinator and Project Assistant for WECAN International. She is an avid photojournalist, writer, seed saver and farmer from New Mexico.