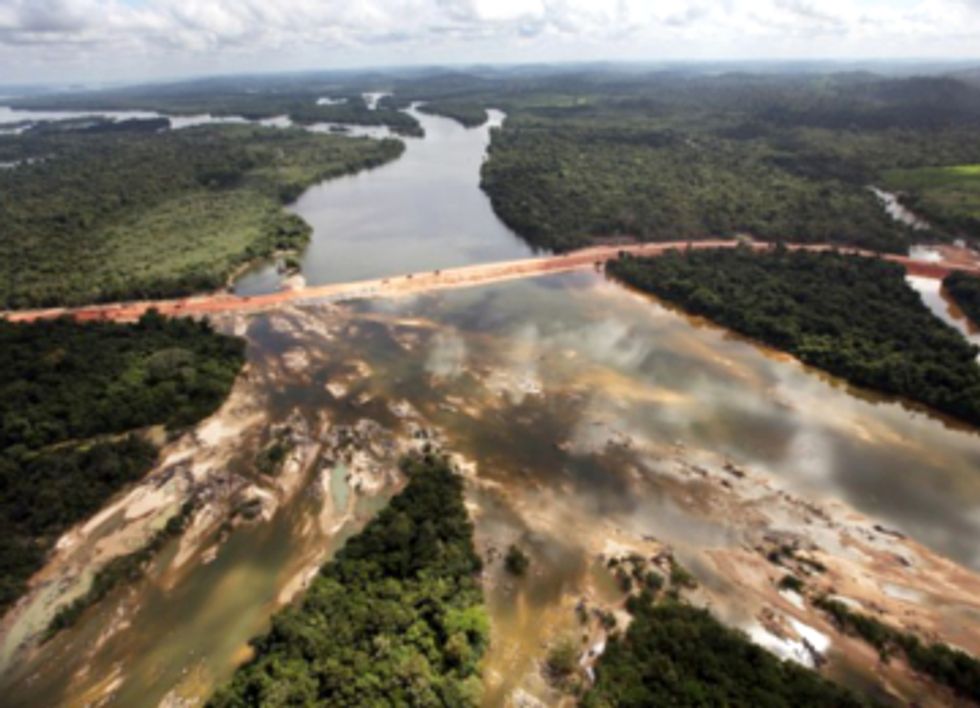 The lawsuits demonstrate that conditions placed upon the dam's environmental licensing have not been met and call for compensation for socio-environmental impacts of the dam, currently under construction on the Xingu River in the Brazilian Amazon.

The MPF filed a lawsuit in late August showing that Norte Energia was deliberately reneging its obligation to purchase land and provide health services for the Juruna indigenous community Km 17, one of the most vulnerable to the impacts of Belo Monte's construction due to its proximity to the constant movement of heavy machinery and workers.

This lawsuit led the national indigenous National Indian Foundation (FUNAI) to issue a complaint to IBAMA, demanding that Norte Energia be held accountable for noncompliance with this formal condition of the environmental licenses for Belo Monte. The Federal Court of Pará State responded this week by giving Norte Energia 60 days to purchase the Juruna land and deliver health care or face daily fines of R$200,000 (U.S.$87,000).

"The situation here has only gotten worse," said Sheyla Juruna, a member of the Km 17 community known for her local and international activism in defense of her community's rights. "Belo Monte created the illusion that people would get everything they didn't have. That's when the problems began. Support from FUNAI never came and our health conditions are precarious. Civil society thinks that the indigenous have rights, yet our rights are being violated every day."

Following the ruling in favor of the Juruna community the MPF filed another lawsuit targeting the neglect of BNDES, IBAMA and Norte Energia stemming from the absence of prior analysis of impacts and associated compensation measures for Xikrin Kayapó communities that are also threatened by Belo Monte. The lawsuit charges that these three institutions violated the rights of the Xikrin Kayapó when they allowed construction to commence on the project without measuring the impacts it would cause to the indigenous group, whose villages are based on the Bacajá River, a tributary to the Xingu directly adjacent to the dam's most serious impacts.

The MPF has asked the Judiciary to suspend Belo Monte's installation license, paralyzing the project until Norte Energia can present findings on the project's impacts and its corresponding compensations for indigenous communities. The lawsuit is unprecedented in its scope as it could force the consortium and BNDES, financier of 80 percent of the dam's costs, to indemnify affected indigenous groups of the Xingu for the delay in measuring and mitigating its socio-environmental repercussions.

"We truly have reason to celebrate seeing BNDES is finally being charged as a responsible party in Belo Monte's disastrous impacts," said Maíra Irigaray Castro of Amazon Watch. "It is time for financiers to pay for the criminal negligence exemplified by noncompliance with conditionalities, which they should also be monitoring for all projects that they finance."

Norte Energia's failure to comply with Belo Monte's legally mandated conditions is not new. IBAMA released a report in July confirming that the compliance has worsened as the dam's construction has sped up. The report shows that only four out of 23 conditions concerning local urban populations have been met.

"Last week we had a meeting with representatives of the government and local people and their discontent is clear," said Antonia Melo, coordinator of the Xingu Alive Forever Movement. "There is no fresh water, no electricity, no health care, no schools and no sanitation. We cannot accept that the conditions, that are fundamental rights guaranteed by our constitution, be undermined in this way. IBAMA must suspend construction, as defined by law, until these conditions are met."

"These legal actions add to the existing evidence of the severe impacts that the Belo Monte dam is having on human rights and the environment in the Xingu, and of the responsibility of all Brazilian agencies involved in the project," said María José Veramendi of Interamerican Association for Environmental Defense (AIDA). "We look forward to a positive result of these legal actions and that Brazil will effectively comply with applicable national and international laws, as all agencies involved can be legally responsible and the State can be internationally responsible for these human rights violations."

Per FUNAI's request, as well as the lawsuits brought by the Public Prosecutors, both IBAMA and the federal judges could suspend the dam's installation license until all the requirements and conditions are met.

"The characterization of Amazonian dams as clean and cheap energy is based on the ability of project proponents, including BNDES, to 'externalize' their true social and environmental risks and impacts. These lawsuits are significant in that they're sending a signal that they are indeed being held accountable for their decisions and the damage that they cause to the environment and indigenous peoples," said Brent Millikan, Amazon program director at International Rivers.