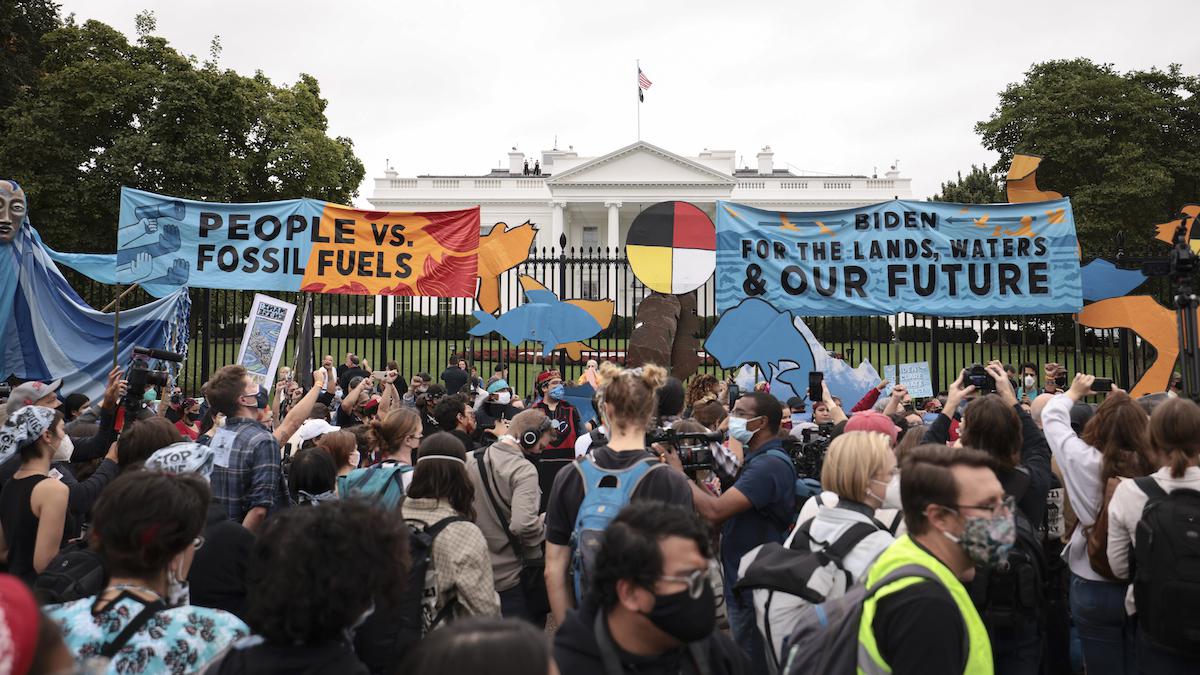 Demonstrators stand in front of the White House during a climate march in honor of Indigenous Peoples' Day on Oct. 11, 2021 in Washington, DC. Anna Moneymaker / Getty Images

On the anniversary of the day murderous tyrant Christopher Columbus accidentally washed up on Guanahani, Indigenous peoples in the Amazon rainforest called on global leaders to respect their lands and human rights as a start to address the climate crisis and protect biodiversity.

“People who exploit and take out resources don’t live [in the Amazon] — but we do. The forest is our home,” Nemonte Nenquimo, a native leader of Ecuador’s Waorani people, told Thomson Reuters.

On Piscataway and Nacotchtank (Anacostan) land in what is now Washington, DC, Indigenous activists demonstrated in front of the White House to call on President Biden to stop approving fossil fuel projects and declare a national emergency over the climate crisis — the first of several days of protests organized by the Build Back Fossil Free coalition.

Tribes across what is now the U.S. also called on Congress to pass the Build Back Better Act, which includes funding for the Indian Health Service, provisions to address the lack of drinking water and broadband access on tribal lands, and other measures to address some of the historic injustices perpetrated on Native Americans.

Organizers of the People vs. Fossil Fuels demonstrations planned their week of climate protests to start on Indigenous Peoples’ Day, as many activists and localities have rebranded Columbus Day, to recognize the work of Indigenous people fighting fossil fuel extraction across the country.

They said Indigenous activists bring generational knowledge of the battles against pipelines and drilling around reservations and a deep understanding of the land that can pave a path forward in tackling climate change.