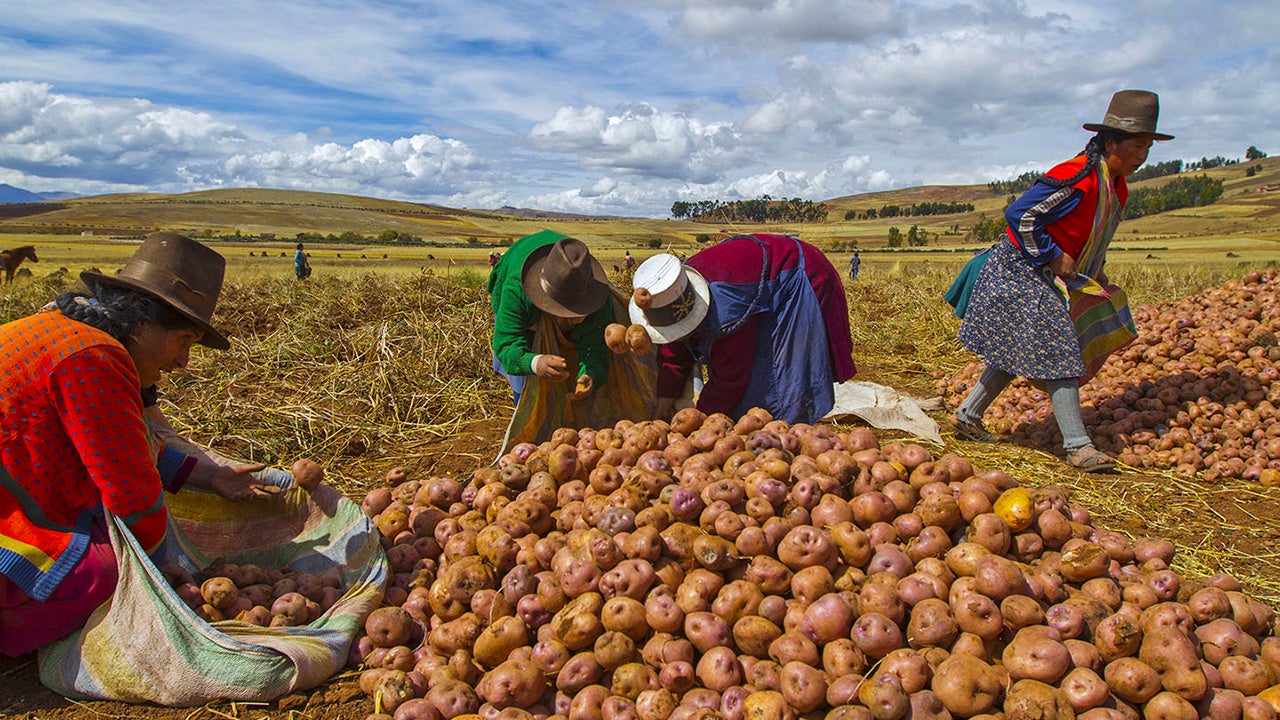 August 9 is the International Day of the World’s Indigenous Peoples – a celebration of the uniqueness of the traditions of Quechua, Huli, Zapotec, and thousands of other cultures, but also of the universality of potatoes, bananas, beans, and the rest of the foods that nourish the world. These crops did not arise out of thin air. They were domesticated over thousands of years, and continue to be nurtured, by Indigenous people. On this day we give thanks to these cultures for the diversity of our food.

Yes, even in a globalized world and food system. Most diversity in crops – and livestock – is still found in the regions where they have been around longest, adapting to climatic extremes, pests, and diseases through millennia interaction with human cultures – as we have weathered our own storms and pandemics. Known as primary regions of crop and livestock diversity, these places are central to the present and future viability of food systems. They are also the homelands of many Indigenous peoples.

For centuries, crop diversity has enriched the world, but has been taken out of the hands of Indigenous people in doing so. That story is only beginning to shift as the rest of the world starts to give Indigenous farmers the respect they are due. Community initiatives like the Parque de la Papa (Potato Park), in the primary region of potato diversity in the Andes of Peru, are connecting with worldwide conservation efforts on the farmers’ own terms.

Six Quechua communities established the Parque to ensure the survival of the thousands of traditional potato cultivars they grow. They then co-designed a unique agreement with the International Potato Center genebank in Lima and the nonprofit Asociacion ANDES to return 410 native potato varieties to the Parque communities. Scientists had collected these from the region’s communities since the 1960s, but many had disappeared from farmers’ fields in the recent decades. That first agreement led to more collaborative research and monitoring, and today the Parque’s diversity is conserved in farmers’ fields, in new community seedbanks, in the CIP genebank in Lima, and, as a final safety backup, 7,000 miles north in the Svalbard Global Seed Vault – where the Indigenous farmers who deposited them still retain their rights over their seeds.

Indigenous farmers and cooks in the primary regions of diversity are resilient. They know all about getting through trying times. Through it all, they have persisted: through loss of access to land and other resources; through industrialization, subsidies, and trade agreements that undermine rural livelihoods; through civil strife and political neglect. Often working in places of extreme topography, they have faced the most severe impacts of the climate catastrophe. This year they have been struck disproportionally, sometimes threatened in their very existence, by the COVID-19 pandemic.

In some countries, legislation finally respects their rights to traditional knowledge and livelihoods. Yet a larger transformation is still needed – to redress injustices, secure access to land, and generate a greater range of opportunities in food and agriculture.

I believe that a key agent of this transformation will be a global network that is already beginning to unite stewards of food traditions in primary regions of diversity. The potential is clear in the direct connections that Indigenous communities are making with chefs, civil society, and commercial endeavors to create – together – market opportunities for agriculturally resilient and nutritious local foods. It is encouraging that consumers are increasingly showing a willingness to try diverse foods, while recognizing the work of farming communities. A boom in community-based development and wider marketing of products made with local crop and livestock diversity is a small sign of the big shift coming.

Another emerging opportunity for Indigenous communities is the increased capacity to learn from the successes and challenges of others. While communities in primary regions of diversity often maintain a broad menu of domesticated and wild species, their food systems generally center on a few key species. Potatoes and quinoa in parts of the Andes; maize and beans in Mesoamerica; bananas and tubers in the highlands of Papua New Guinea: such emblematic foods can be pillars around which to co-organize global networks of custodians of agricultural biodiversity, building on existing networks of small-scale and Indigenous farmers. One such effort is hosted by the International Network for Mountain Indigenous Peoples. Inspired by the Parque de la Papa, it now includes communities in Bolivia, China, Ecuador, Ethiopia, Guatemala, India, Kenya, Mexico, Papua New Guinea, Peru, and Tajikistan, each organized around different emblematic Indigenous crops. With time, the initial focus on relatively “charismatic” crops can be leveraged to benefit other, less well-known species and their stewards, too.

I draw hope and excitement from seeing Indigenous communities achieve recognition in local, national, and international policy arenas, and watching them strengthen their work by seeking out collaborations based on mutual respect. That kind of collaboration can reach across dramatically different scales, from farmers’ fields, homes, and tables, to community actions like local seedbanks, to the large public genebanks that make crop conservation a global effort, and a global good. Meanwhile, redressing the imbalances that disadvantage Indigenous communities, and undervalue the diversity they generate and maintain, will mean reframing this diversity and its engendering biocultural processes as central community assets.

Celebrating Indigenous people on August 9 is not just about having a party; it helps keeps diversity and community on their feet as globalization shifts the ground from under us all.

Alejandro Argumedo is Director of Programs and Andes Amazon Lead of Swift Foundation (www.swiftfoundation.org); he is a recognized indigenous peoples’ food rights activist currently acting as the international coordinator of the International Network of Mountain Indigenous Peoples (INMIP).