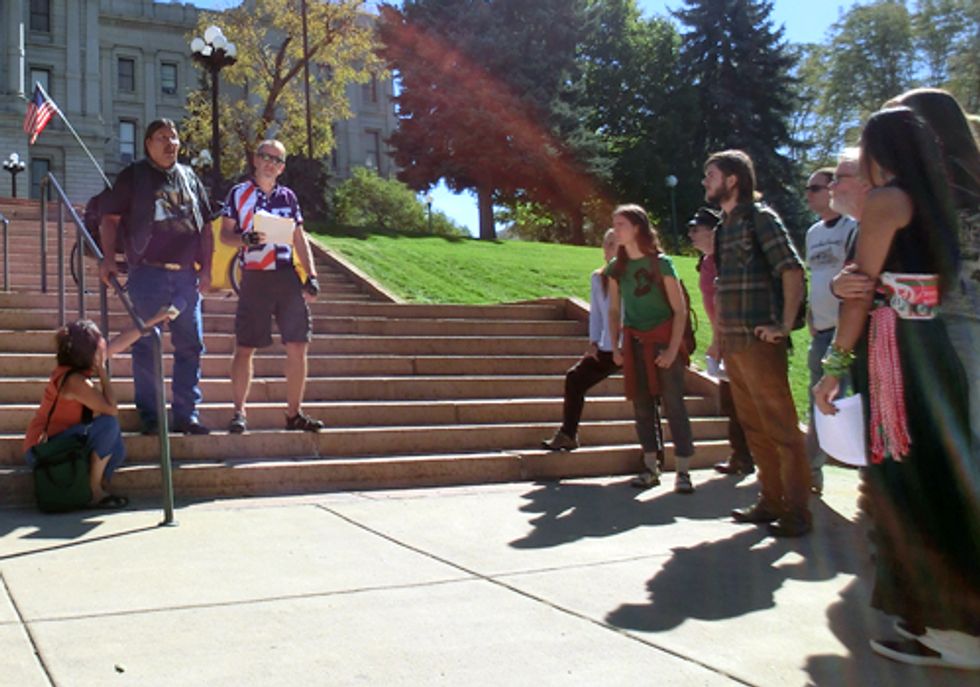 On Oct. 3, indigenous people and organizations from Colorado and across the U.S. came together to raise their voices in the presidential battleground state of Colorado on the eve of the first nationally televised presidential debate. Dissatisfied with President Obama’s and Governor Romney’s failure to address the many threats posed to clean water in Indian country, Tribal leaders and communities called on both candidates to withdraw their support for TransCanada’s Keystone XL tar sands pipeline and to honor rights and territorial boundaries established by treaties.

Vice President Tom Poor Bear of the Oglala Lakota Nation shared words from his heart about the importance of the land to his people, the obligation of the U.S. to respect the territorial boundaries set forth by treaties, and the duty of the present generation to protect the land and water from toxic contamination by the Keystone XL pipeline.

“I look at this pipeline,” Poor Bear explained, “as an 1,800 mile snake that’s going to bore itself into Mother Earth and start spitting black venom at our water, which our future generations are going to drink someday. We have one mother, and that’s Mother Earth,” Poor Bear stated, reminding Americans that we are all in this together.

In his statement, Oglala Lakota hereditary Chief Oliver Red Cloud, great grandson of Chief Red Cloud—who signed the 1868 Ft. Laramie Treaty—cited specific provisions of that treaty which the U.S. would violate if it allowed the pipeline to be built.  “I hope that the candidates will hear my words and begin to understand what they have, so far, been overlooking. The proposed Keystone XL pipeline is not just an environmental issue. It is an issue of sustainability and survival for Native people. It is an issue of preserving and protecting what is sacred. And it is an issue of upholding the law by honoring the treaties.”

“The U.S. government has a long history of violating its own laws and policies when it comes to its treatment of Indian tribes," said Jennifer Baker, Oglala Lakota legal counsel. “As the proposed northern pipeline segment works its way through the administrative process, our next president will have an opportunity to redefine and restore the relationship of the United States with indigenous nations by finally living up to its legal obligations. Doing so requires adequately consulting affected tribes, understanding and enforcing the terms of the treaties, and rejecting the Keystone XL pipeline.”

S.P.I.R.I.T. also issued a statement opposing the pipeline and pledged to “join with like-minded groups from this date forward to stop the pipeline.”

Renewable Rider Tom Weis, a strong ally of Native communities fighting the pipeline, closed the event with firm words and action, saying, the candidates “need to understand we’re not going to stand for this pipeline. They need to hear that message loud and clear, and we’re going to start delivering it today.”

Participants then accompanied Weis, in his bright yellow, human-powered “rocket trike,” in delivering copies of an Open Letter to the Denver Romney and Obama campaign offices calling on both candidates to defend America from this imminent economic, public health and national security threat.