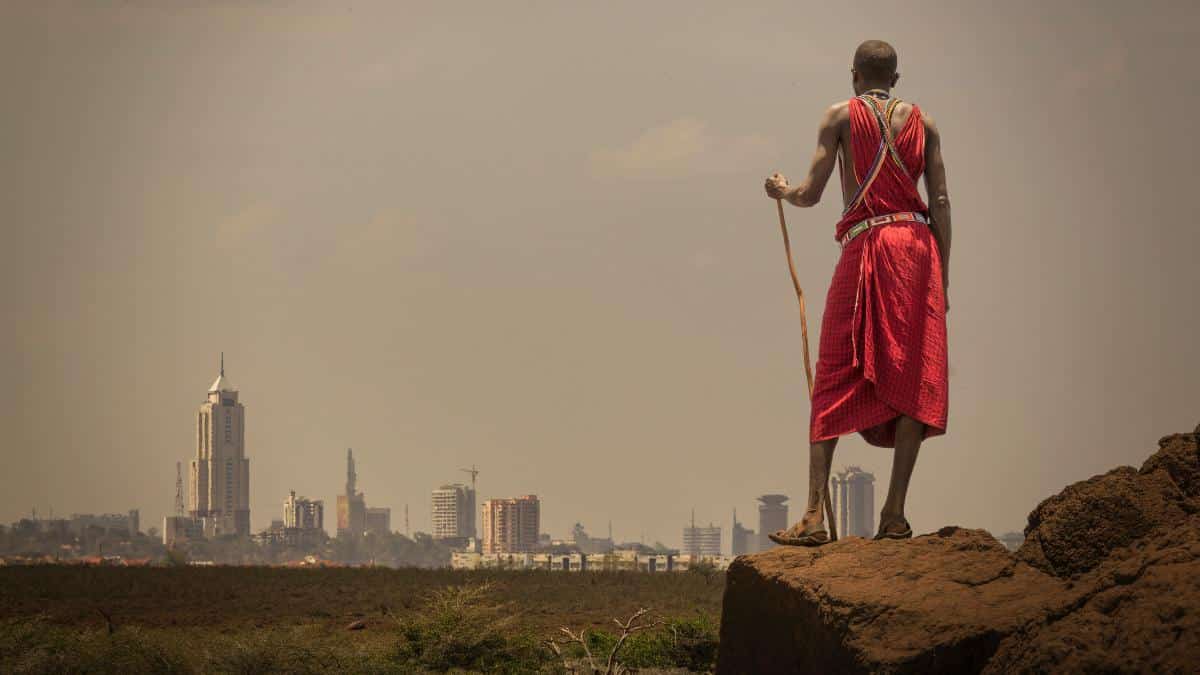 A Masai man in traditional robe looks out at the skyline of Nairobi, Kenya. Lost Horizon Images / Cultura / Getty Images

A new study has affirmed the growing and long overdue awareness among scientists and conservationists that Indigenous societies are the best caretakers of biodiversity.

The new research, published in the Proceedings of the National Academy of Sciences this month, looked at maps of human habitation over the last 12,000 years and found that almost three-quarters of Earth’s land had been sustainably shaped and managed by Indigenous or traditional societies during that time. This means that it isn’t simply human presence in a landscape that drives environmental destruction.

“With rare exceptions, current biodiversity losses are caused not by human conversion or degradation of untouched ecosystems, but rather by the appropriation, colonization, and intensification of use in lands inhabited and used by prior societies,” the study authors wrote.

The research was the fruit of a uniquely multidisciplinary effort involving 18 researchers from more than a dozen institutions all over the world, according to a University of Maryland, Baltimore County (UMBC) press release. The team of geographers, archaeologists, anthropologists, ecologists, and conservation scientists looked at patterns of land use since 10,000 BCE and found that most areas faced some form of human intervention such as burning, hunting, cultivation or the spreading of new species. This included more than 95 percent of temperate forests and 90 percent of tropical ones.

“Areas untouched by people were almost as rare 12,000 years ago as they are today,” lead author and UMBC professor of geography and environmental systems Erle Ellis said in the UMBC release.

The difference is that these earlier societies used the land in a way that was not destructive and was actually beneficial in many cases. The researchers looked at how past histories of land use were associated with areas currently high in biodiversity and found that many areas now considered natural were in fact shaped by past human interventions.

The new research goes against past assumptions about conservation. John Muir who founded the Sierra Club, for example, did not think that Indigenous communities belonged in protected wild areas, as Open Access Government explained. Native American communities were excluded from the country’s national parks when they were formed, as UBMC pointed out. The study also overturns past research claiming that most of the globe was uninhabited up until 1500 CE.

“There’s a paradigm among natural scientists, conservationists and policymakers that human transformation of terrestrial nature is mostly recent and inherently destructive,” Watson said.

The fact that this is not true has important implications for preventing biodiversity loss and the sixth mass extinction. Explicitly, it emphasizes that Indigenous rights and natural protection go hand in hand.

“This study confirms on a scale not previously understood that Indigenous peoples have managed and impacted ecosystems for thousands of years, primarily in positive ways,” study co-author Darren J. Ranco, associate professor of anthropology and coordinator of Native American research at the University of Maine and a citizen of the Penobscot Indian Nation, told UMBC. “These findings have particular salience for contemporary Indigenous rights and self-determination.”

The study is not the first to make this point. A major UN report published in March found that Indigenous communities in Latin America were the best guardians of forests on that continent. Still, inequalities persist. Indigenous groups will not have a seat at the negotiating table at the upcoming UN biodiversity conference this year, though they will be present as observers.

Ranco noted that Indigenous groups currently manage around five percent of land on the planet, but that land contains 80 percent of Earth’s biodiversity. He argued that contemporary efforts to conserve this biodiversity should not repeat the mistakes of the past.

“We must also assure that new attempts to protect lands and biodiversity are not just a green-grab of Indigenous lands,” Ranco told UMBC. “We cannot re-create the worst of colonial policies meant to exclude Indigenous people, which would undoubtedly make the situation much worse for the environment and humanity.”