Indigenous Artists Use Technology to Tell Stories About Their Ancestral Lands 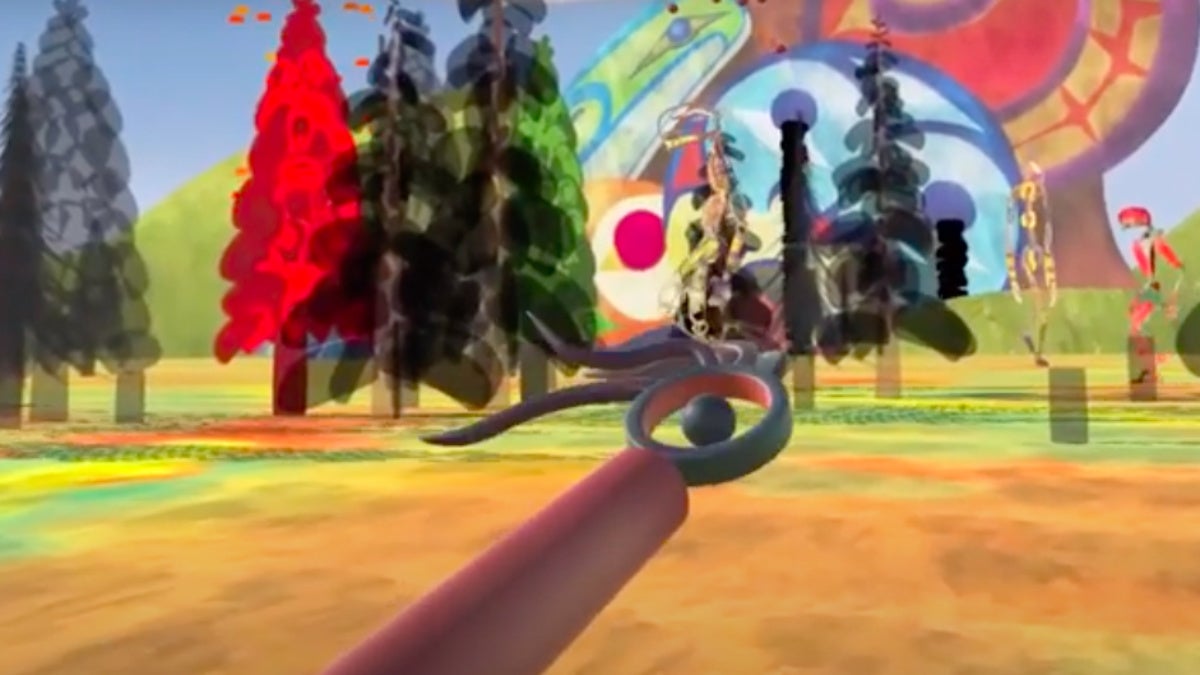 Lawrence Paul Yuxweluptun does not use email or text. In the Coastal Salish communities from which he hails, he has been known as a painter and a dancer since the 1980s. Yet, he has been exploring the “virtual reality renaissance”—the technology that allows you to figuratively step into a computer-generated 3D world—since it made its soft debut in the ’90s.

In 2019, Yuxweluptun fell in with Paisley Smith, a filmmaker and virtual reality director who, like Yuxweluptun, comes from the unceded territories of the Musqueam, Squamish, and Tsleil-Waututh First Nations, in what is today known as British Columbia.

Together, they created Unceded Territories, an immersive and provocative virtual reality experience that drops the viewer into a world designed in Yuxweluptun’s style. Surrounded by his ’80s-style visuals, you are then encouraged to design the world as you want by throwing oil paint onto the screen with abandon. Only once you’ve reached the end of the virtual adventure do you realize the running oil has left a trail of destruction in its wake, and that there is no turning back from this changed environment.

By combining Smith’s virtual reality filmmaking with the ’80s-style visuals of Yuxweluptun’s paintings, Unceded Territories explores the intersection of environmentalism and Indigenous rights. It is just one example of the many ways Indigenous artists across the Americas are engaging technology and other works to draw attention to their culture and the environmental challenges confronting their communities, which are on the front line of climate change.

“How do I teach people to love the land?” asks Yuxweluptun, whose paintings tell stories about Indigenous human rights and climate change. “You can’t use my story and blame me for that. You can’t blame me for global warming.”

In the past, establishments outside of Indigenous communities rarely took note. Now, with social media, awareness is no longer limited to those directly affected, he says.

Virtual reality, Yuxweluptun says, is another medium for someone like him to express his ideas in more ways than just on a one-dimensional canvas. “Not everybody can do it, because you have to be able to think in a certain way,” he says. “It’s a different way, other than painting or making a sculpture.”

Here are the stories of four other groups of Indigenous artists using technology and art to tell their communities’ stories.

The Condor and the Eagle

Bryan Parras has been working in radio in the Houston market since the early 2000s and, as time passed, saw how social media made storytelling more accessible to everyone—including those in marginalized communities.

In 2014, Parras met a European couple, Sophie and Clément Guerra, who had come to the United States to support the climate movement and who quickly became entangled in the Indigenous movement as well. Eventually, they began work on The Condor and The Eagle, an independent documentary about four Indigenous leaders on a transcontinental adventure. Journeying from the Canadian plains, through the U.S and deep into the heart of the Amazonian jungle, they battled Big Energy while working to unite the peoples of North and South America and deepen the meaning of “Climate Justice.”

Parras, himself of mixed Indigenous descent, is no stranger to filmmakers and reporters who come into Indigenous communities to observe, but without getting their actual input. “It’s another form of extraction, right? Cultural extraction,” he says.

It’s why Parras, was the documentary’s campaign producer, acted as a bridge between the filmmakers and his community, so that Indigenous communities portrayed in the film would be included in the editing process as well. “What may not be written in the history books are now archived in this story,” he said.

Since its premiere at the Woodstock Film Festival in October 2019, The Condor and the Eagle has been selected by more than 50 film festivals and won 12 awards. The most notable one is Best Environmental Documentary at the 2019 Red Nation International Film Festival in Beverly Hills, California.

Casey Koyczan is Tlicho Dene from the Northwest Territories of Canada. When he collaborates on virtual reality exhibits, he brings what he calls a “Northern aesthetic”—visuals of the remote landscape of the Northwest Territories of Canada. His latest project is Wenazìi K’egoke; See Visions, a three-chapter virtual reality experience that takes you into a dreamlike interpretation of encounters with animal spirits of the North.

See Visions uses stark colors to evoke the feeling of walking through the snow under an aurora borealis. Koyczan considers the animals depicted in this atmosphere-heavy video to be its most important features. “It’s all about being involved in the North,” he says. “It reinforces the subtle notion that we are on their territory.”

See Visions debuted in a prototype version in 2019 at the annual ImagineNATIVE Film and Media Arts Festival in Toronto, a global hub for Indigenous-made media art. Koyczan and his partner on the project, Travis Mercredi, are now developing it for length and interactivity.

It’s the kind of work ImagineNATIVE envisioned when it began featuring virtual reality projects in 2017, with the idea of depicting the world for Indigenous communities 150 years into the future. The idea, Koyczan says, is that although their current reality is not ideal, Indigenous communities will survive. “Thriving in this society hasn’t been laid out yet,” Koyczan said. “It’s really cool to depict these things. How things could be.”

Although he studied fine arts in college, Koyczan decided he preferred shaping things with his hands. He often builds installations that allow him to project each of his projects from his laptop—creating a physical aspect for further immersion. He also creates the music for his projects, playing several instruments in a style he calls “electro-rock.”

About his and Mercredi’s work, Koyczan says, “We feel it’s providing accessibility and insight into a portion of our landscape and aesthetic as new media artists.”

In 2019, the Dundas West Art Museum in Toronto hosted an art exchange that allowed one Canadian artist to travel to Chile to paint a mural, while Chilean artist, Paula Tikay, went to paint in Canada.

“At the end of [painting] a mural, one leaves and leaves [their] work for the people who transit those places,” says Tikay, who is Mapuche, the largest Indigenous group in Chile. “They are like small messages that can identify and rescue stories from places. They are like gifts that appear for the inhabitants of that space.”

Dundas West Art Museum is Toronto’s first open-air street art museum. The neighborhood of Dundas West has long been connected with Chile since Chileans began moving there as refugees of Augusto Pinochet’s dictatorship in the 1970s.

Tikay’s contribution to the museum is a Three Sisters mural, depicting three Indigenous women who represent the three main agricultural crops of Indigenous groups in the Americas.

Three Sisters is the name given to climbing beans, maize, and squash that are/were grown together in an agricultural strategy called companion planting. It’s a historical reminder that European settlers learned to plant crops on American soil from its Indigenous people.

Tikay calls it an honor to use her art to remind people of that, especially because it was also practiced in her ancestral southern Chile.

The Houma Nation sits on the Mississippi Delta; the wetlands there were struck by both Hurricane Katrina in 2005 and the BP oil spill five years later. These disasters, both natural and manmade, slowly chip away at the way of life of the Houma people, making them less able to hunt, trap, and fish.

In 2015, Monique Verdin co-produced the documentary, My Louisiana Love, which traces her journey back to her home in the Houma nation and focuses on her community’s struggle with decades of environmental degradation.

It has recently been made available on PBS again.

Verdin herself expressed surprise at its rerelease. “I didn’t think it would be relevant at the time,” she says, “but it’s even more relevant now.”

In telling this larger social and economic story, Verdin makes the film semi-autobiographical by displaying her and her family’s struggles, which include the death of her father. “With my father gone,” she says in the narration, “I had lost another piece of my Louisiana.”

She is working to address some of the issues highlighted in the documentary. She is part of Another Gulf is Possible, a grassroots collaborative, led by women of color, that is doing resistance work against corporations searching for oil in the region while reviving Indigenous methods of living off the land sustainably.

Demi Guo is an NYC journalist with bylines in WNPR and National Geographic.