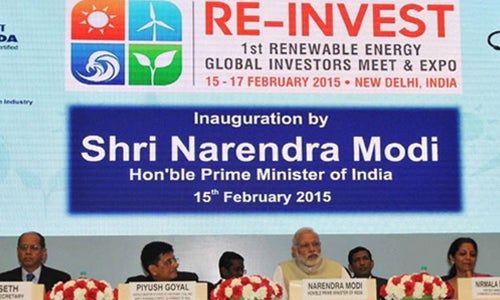 Prime Minister Narendra Modi proclaimed India’s “megawatts to gigawatts” challenge at the Renewable Energy Investment Summit (RE-Invest) last week, building on his existing commitment to 160 gigawatts of solar and wind by 2022. Energy Minister Piyush Goyal doubled down, saying that he expected that the already ambitious goal might well be substantially increased for the third time in nine months, and told the audience that “the government stands committed to making renewable energy India’s gift to the world.” Goyal then went on to promise that India would create a consortium of the “300 days of sunshine nations” to further bring down the cost of solar power. And long time renewables advocate, Rail Minister and former Coal and Power minister Suresh Prabhu declared that the Prime Minister’s “Swach India” (Clean India) campaign needed to be matched with Swach Shakti (Clean Power). 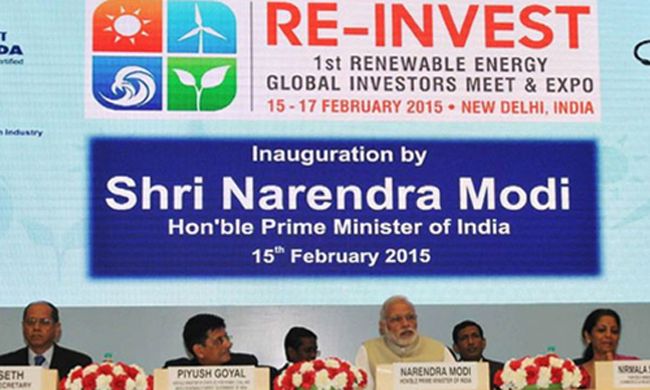 Energy Minister Piyush Goyal doubled down, saying that he expected that the already ambitious goal might well be substantially increased for the third time in nine months, and told the audience that “the government stands committed to making renewable energy India’s gift to the world.”

The conference was India’s first big renewables trade convention, and it made lots of news. The Climate Group released a new analysis of the business opportunity from off-grid renewables in India, concluding that by 2018, in only three years, this would have become at least a $150 million dollar business, but also pointing out that the current regulatory regime makes getting to scale very difficult for businesses seeking to serve households currently denied electricity.

Anil Ambani, one of India’s major industrialists, laid out the case for solar energy in an extraordinarily informative opinion piece in the Hindustan Times, identifying with tremendous specificity exactly what it would take for India to realize its potential, arguing that “The future of energy is solar and it is very bright” and making clear that India can solve the problem of its limited unused land area by putting a full 40 percent of the country’s total solar generation on roof-tops. Ambani is not just opining. His company has committed to build 6 GW of solar power in the State of Rajasthan, which would equal all of its conventional power generating capability, making Reliance perhaps the first major fossil fuel company in the world to switch to clean energy.

And UN Secretary General’s Special Envoy for Cities and Climate Change Michael Bloomberg challenged India to recognize that the public health costs of continuing to rely primarily on coal for its electricity were no longer tolerable. Bloomberg, with whom I am working on the Envoyship, also told key Indian business and governmental leaders that they should be cautious about assuming that needed financing would be there long term for coal power, since investors were beginning to shy away—from concerns about climate implications but also because solar was clearly going to be cheaper over the next three decade. Investors, Bloomberg argued, are worried that coal plants may become stranded because they are no longer competitive.

But Bloomberg was enormously bullish about India’s clean energy opportunities.

“The fact is: People want to live in cities with clean air and water, good public transportation, and streets that are safe for walking and biking. And where people want to live, businesses want to invest. The good news is, as Prime Minister Modi is showing, confronting climate change goes hand-in-hand with smart economic growth. And from my experience, he is absolutely correct to make cities a central focus of his work.”

India is particularly vulnerable to the downside of fossil fuels and global warming. The City of Mumbai, which generates 40 percent of the nation’s tax revenues, has a larger population at risk from sea level rise and storm surge than any city on the planet—2.5 million residents are already forced to live below the high tide line at present sea level. The nation, only a year ago, was spending 5 percent of its national income importing coal and oil. Paying for imported carbon had forced the Reserve Bank of India to raise interest rates to growth-strangling levels, and the economy had tanked. Suddenly, with oil temporarily at a more reasonable price, and coal following it down, interest rates have been slashed. The Indian economy is beginning to hum again. But rates are not as low as business would like. RBI is being cautious, worrying that cheap oil and coal are a momentary relief only. If a booming India keeps relying on imported carbon to fuel its future, the cost will, indeed become unbearable, and fairly soon.

But GW of solar power don’t stoke the demand for imported coal. Nor does moving goods from trucks to railroads. Rail Minister Prabhu seems confident the next budget will give him the resources to begin rebuilding India’s rail system, which now carries only 1/3 of its goods. (In China and the U.S. rail handles 50 percent of all goods traffic.) And the main focus of Bloomberg’s India visit, Modi’s aspiration to create 100 Smart Cities, offers India a key strategy to minimize its reliance on imported fossil fuels. As Bloomberg points out, in most America cities most of the carbon pollution comes from transportation—but not NYC, where transit carries the bulk of the burden. Given the size and density of cities like Mumbai, Delhi, Calcutta and Chenai, India doesn’t have the option of adopting auto-centric growth—Delhi cannot become Houston. So New York ought to be their model. And if it is, India will need a fraction of the oil per capita that the U.S. uses, even as it catches up economically.

So India can have its Swach Shakti moment, its gigawatts of solar and wind, its high performance urban development, its inclusive, low-carbon growth. But there are two major threats.

So it is true, as the conventional wisdom has it, that India and the US have different responsibilities in combating the climate threat. What isn’t true is that the argument ought to be about who is going to sacrifice, since sacrifice is not the key to progress—collaboration and cooperation are. After the last week, I would gently suggest that it is India, not the US, which is closer to genuine climate leadership.