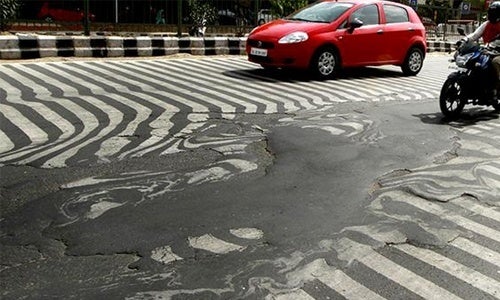 India is in the midst of a major heat wave, which has killed at least 800 people and melted roads in New Delhi as temperatures neared 122 degrees Fahrenheit (50 degrees Celsius). India’s Meteorological Department issued heat warnings to several states where temperatures are projected to reach beyond 113 degrees Fahrenheit (45 degrees Celsius) over the next few days, according to AFP.

The worst-hit state Andhra Pradesh in southern India has recorded 551 deaths in the last week alone. Every summer, across the country, hundreds of Indians, especially the poorest members of society, die from extreme heat, while tens of thousands deal with power outages from an overstrained electric grid as air conditioning use soars, reports AFP.

But this summer season is particularly bad, the most severe since 2010 when an estimated 250 people died from heat-related causes, which was said to be the worst since record-keeping began in the 1800s. The maximum temperature in the capital hit a two-year high of 45.5 degrees Celsius on Monday, which is five degrees higher than the seasonal average, reports the Hindustan Times. And, the death toll from heat mortality could be much higher than estimated because, according to Scroll.in, “the government counts only death by heat stroke and heat exhaustion as heat wave deaths. The narrow definition does not account for the way ‘heat exposure stresses underlying physiological systems,’ a study on heat mortality in Ahmedabad said.”

The study found that “mortality rates in Ahmedabad were 43 percent higher in May 2010 when the city experienced a heat wave as compared to the same days in 2009 and 2011,” says Scroll.in. “An excess of 1,344 deaths occurred in May 2010, relative to the average for the years before and after.”

And heat waves are expected to intensify around the globe in the future, according to a report last month from climate scientists. Over the last century, India has become hotter and hotter and will continue to see a rise in the number of hot days. “The heat waves are projected to be more intense, have longer durations and occur at a higher frequency and earlier in the year,” said the researchers.

The Indian government has come under intense criticism for its failure to respond to rising temperatures. “The Central government and the National Disaster Management Authority have not put in place preventive measures for the summer nor do they have any curative plans lined up after the large number of casualties,” says Scroll.in. “The union home ministry has not even declared a heat wave as a ‘national disaster.'”

One city, though, is stepping up to the plate: Ahmedabad. The city’s Heat Action Plan, in place since 2013, is a four-point strategy developed by the Ahmedabad Municipal Corporation, Indian Institute of Public Health, Natural Resources Defense Council and Georgia Institute of Technology:

Going forward, India will need to develop a nation-wide heat action plan as France, the UK, Australia and other countries have done to deal with increasing, deadly heat waves.