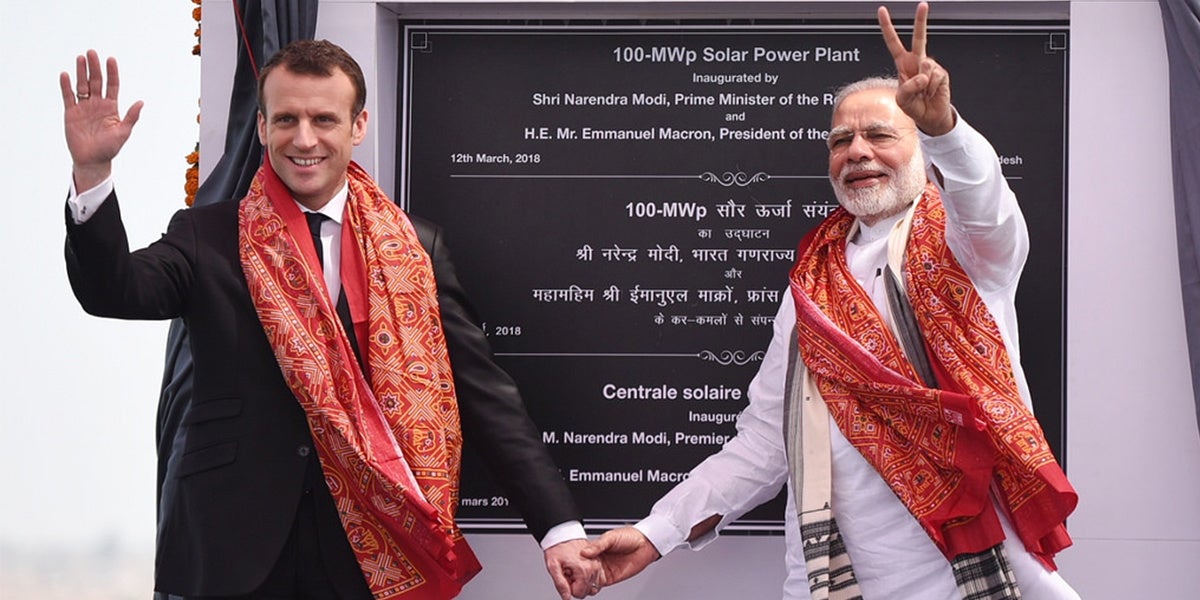 As the International Solar Alliance (ISA) kicked off its founding conference in New Delhi this past weekend, India and France publicly reaffirmed their commitment to working together to fight climate change.

The two countries signed a pact on “cooperation in the field of environment” on Saturday, a day before the conference began, The Economic Times reported.

The pact is designed to facilitate information exchange between government officials and experts in the two countries as they work to protect the environment and combat climate change.

The ISA was launched by Indian Prime Minister Narendera Modi and former French President Francois Hollande at the 2015 Climate Change Conference in Paris that also gave rise to the Paris agreement. It seeks to facilitate cooperation between 121 solar-rich countries lying between the Tropics of Capricorn and Cancer in order to lower prices and drive innovation in the solar sector. It became a treaty-based organization on Dec. 6, 2017.

The ISA, and the new cooperation pact, are two examples of how France and India’s governments are positioning their countries as leaders in the global fight against climate change.

Macron has built on on his predecessor’s commitments. At the World Economic Forum in Davos, Switzerland in January, he pledged to shutter all French coal plants by 2021, advancing Hollande’s promise by two years. India, meanwhile, has committed to building the capacity for 100 gigawatts of solar power by 2022. While India is the third largest releaser of carbon dioxide, according to the most recent data available, its current policies also put it on track to reach an emissions level compatible with 2°C of warming, according to analysis performed by Climate Tracker. For comparison, the current efforts of the U.S., the no. 2 releaser, are deemed “critically insufficient” to meet even the 2°C goal.

Both Macron and Modi have doubled down on their climate efforts in response to Trump‘s decision to pull the U.S. out of the 2015 Paris agreement. The two leaders gave a joint press conference in June pledging to collaborate in the face of the U.S. president’s withdrawal. “We are both convinced that our countries have to do a lot for the ecological and environmental transition and the fight against global warming,” Macron said at the conference, Reuters reported.

Macron has also offered funds, cheekily titled the “Make Our Planet Great Again” grants, to U.S. and other non-French climate scientists who apply to come to France and conduct their research.

At this past weekend’s ISA conference, both countries reiterated their commitment to international climate change efforts.

In a joint statement issued the day before the conference, the two nations “committed to fully implement the Paris Agreement at the COP24 and further on, under the United Nations Framework Convention on Climate Change (UNFCCC) as a part of an irreversible global process at combating climate change for the benefit of all humanity,” The Economic Times reported.