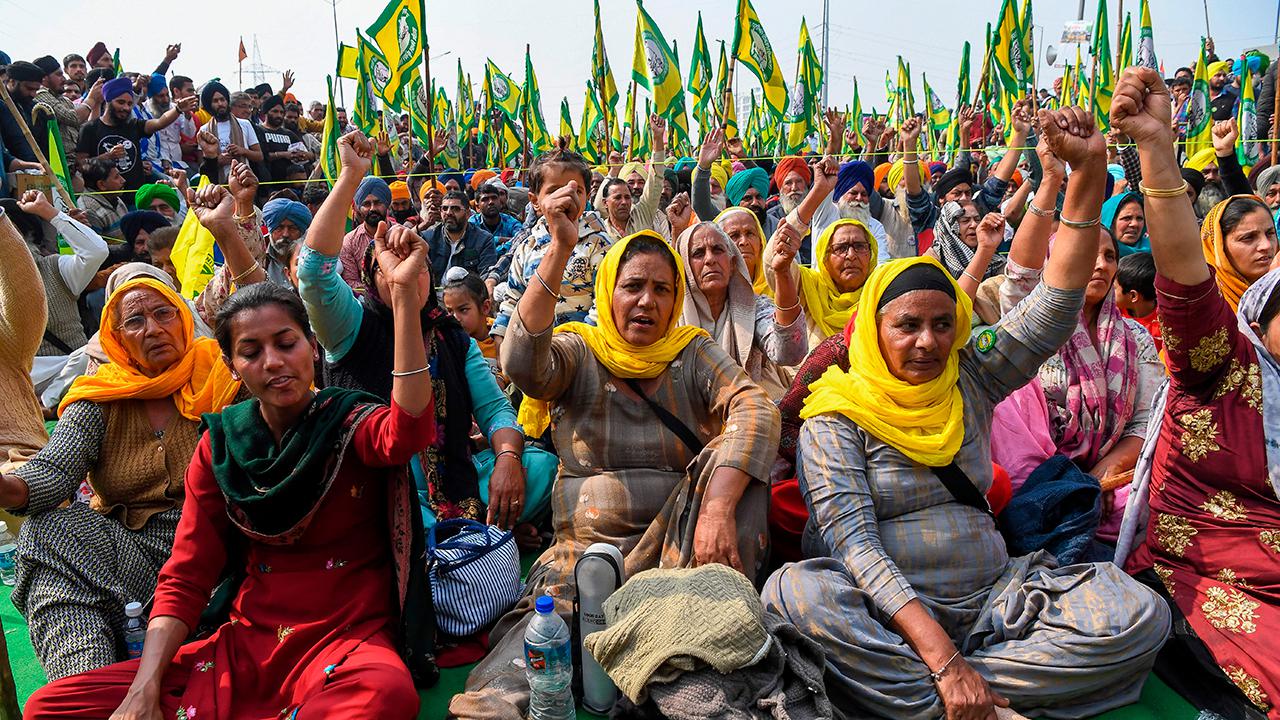 Farmers shout slogans along a blocked highway as they continue their protest against the central government's recent agricultural reforms at Delhi-Uttar Pradesh state border in Ghaziabad on February 2, 2021. PRAKASH SINGH / AFP / Getty Images

Over recent months Raja, a farmer in India’s Tamil Nadu state, has had a change of routine.

Every few days, the 53-year-old leaves his 30-acre (12-hectare) farm in the Villupuram district — where he grows a patchwork of rice, sugarcane, coconut trees and vegetables — and joins a small group demonstrating outside government offices and main roads in his village.

Raja, who goes by one name only, is one of millions who have joined sustained protests across India’s villages and cities in opposition to three farm laws introduced in September last year.

New Delhi, the focal point of the outcry, has witnessed striking scenes of tractor rallies and sit-ins on its outskirts, escalating last week to violence and the storming of the Red Fort.

Yet farmers say the market-friendly reforms leave them open to exploitation from large corporate actors and endanger their livelihoods.

“We are against these anti-farmer, pro-corporate farm laws,” said Raja.

Farmers and activists fear the legislation will exacerbate existing stresses in the agricultural sector, which has experienced stagnant growth for six years and decades of rising debt. The pressures are believed to have pushed thousands to suicide.

“There is so much uncertainty,” said Raja, whose income hasn’t increased for over a decade. “Before the software boom of the 1990s, I was earning as much as my engineer friends. Today, I am nowhere.” He’s been selling a 75 kg bag of paddy rice at around (€10.70), less than the government’s minimum price support, for over 15 years.

Raja worries that the new laws, which weaken price guarantees for certain crops, will leave farmers even more vulnerable.

The current laws push for contract farming, wherein farmers enter into legally binding agreements with large corporations and private players. Activists say this will place them in an unequal power relation, as a failure to deliver crops due to harvest loss could even mean loss of land.

A breakthrough in calming the months of protest initially appeared to come on January 12 when the Supreme Court decided to temporarily suspend the legislation. But it was not the victory many hoped for.

The court has appointed a committee to hold further discussions between protesters and government officials to help resolve the ongoing dispute. Khadse says farmers believe the appointed members are supporters of the laws and will continue protesting until they are fully repealed.

She also argues the legislation fails to tackle the root causes of the sector’s problems.

“The laws don’t mention the environment,” said Khadse. “But the farm crisis today has ecological roots.”

She says that today’s problems can be traced back to the 1960s Green Revolution, when the government supported industrial cultivation of specific crops and adopted modern technology to maximize output. India’s food basket was homogenized as certain crops — mainly high-yield varieties of rice, wheat and pulses — were favored over others.

Land has been left depleted by monocultural cultivation of high-yield seed varieties, said Khadse. She believes the costs of inputs needed to keep producing has pushed farmers into a cycle of debt.

“The increase in agricultural productivity has come at a tremendous cost to the environment,” said Thomson Jacob, a policy consultant at the Centre for Biodiversity Policy and Law in Chennai. Jacob says these include loss of soil nutrients, excessive irrigation, water scarcity, indiscriminate application of some nutrients and pesticides and loss of agrobiodiversity.

Farmers today are dealing not only with the legacy of the Green Revolution but the added impacts of climate change. Those working in the agricultural sector, which employs over 40% of India’s labor force, grapple with drought and flooding.

Raja says a changing and unpredictable climate is affecting the yield on his farm. In late November last year, his crops were partially damaged as a result of Cyclone Nivar. Research shows that cyclonic activity in the Bay of Bengal, along which Tamil Nadu sits, has been rapidly intensifying due to rising temperatures.

Although cultivation practices have been intensified since the Green Revolution, today 82% of Indian farmers still have lands of less than 5 acres (2 hectares).

“These new laws will push monocultural farming and unsustainable practices,” said Gunasekar. He argues the laws should be repealed and that price protection should instead be offered for a more diverse range of crops to incentivize their cultivation.

Without the security of a base price and poor market linkage, India’s indigenous crops — which are not high-yielding — have fallen out of favor over the years.

However, Jacob says that if farmers are given incentives to produce traditional seed varieties then the push for contract farming could be used to help reverse the decline engendered by the Green Revolution.

“If contract farming encourages organic products, it will enhance agrobiodiversity,” said Jacob, adding this could be through export of traditional rice varieties and certified organic products.

Raja is less optimistic for the future. He feels disillusioned by the fact that instead of engaging with the farmers as equals, the government has left them at the mercy of courts and corporations.

“I don’t want my children to enter this occupation, even though we’ve done it for generations,” he says. “We farmers no longer trust the government.”