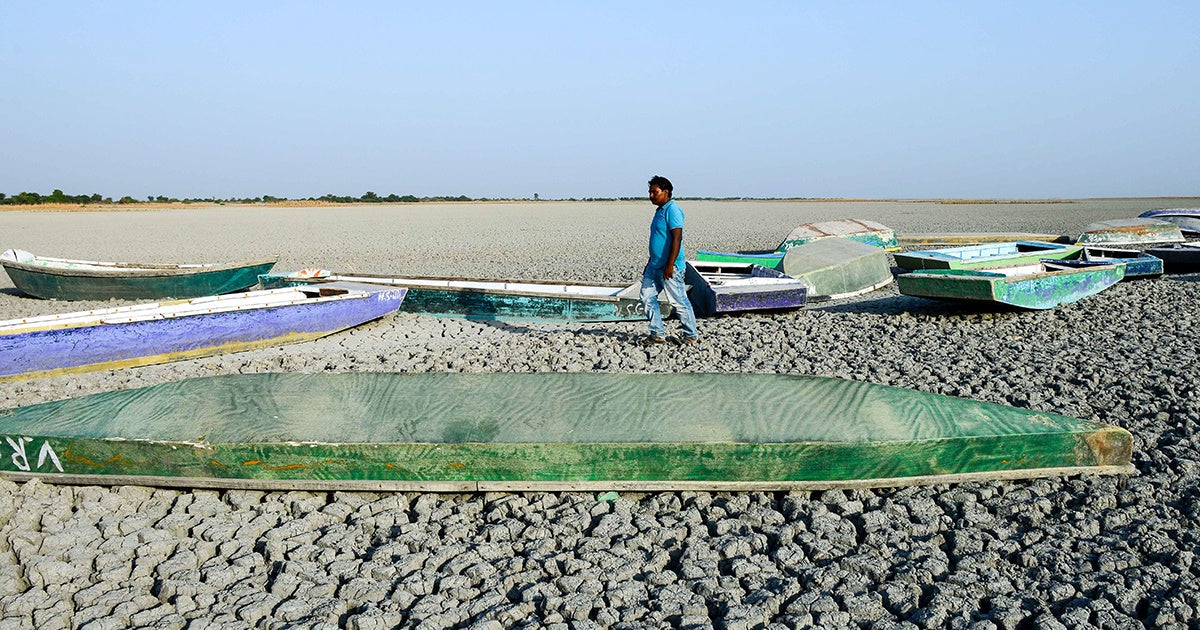 In this picture taken on June 4, an Indian boatman walks amid boats on the dried bed of a lake at Nalsarovar Bird Sanctuary, on the eve of World Environment Day. Sam Panthaky / AFP / Getty Images

Nearly 50 people died on Saturday in one Indian state as record-breaking heatwaves across the country have caused an increasingly desperate situation.

Officials in Bihar reported that as of Monday, 76 people in total had died of heat-related conditions as temperatures in the region hovered around 113 degrees Fahrenheit. Hospitals have increasingly overflowed with patients reporting heatstroke since the heatwave began in early June.

Across the country in the city of Aurangabad, India Today reported, 22 died just on Saturday. The death toll that day in the northern city of Gaya was 20.

About two-thirds of India is facing the heatwaves at the same time that roughly half of the country is struggling through its worst drought in six decades.

More than 1,000 miles south of Bihar, The Guardian reported, residents in Tamil Nadu have also been ordered to stay indoors between 11:00 a.m. and 4:00 p.m.

June’s heatwave is already one of the longest India has ever seen. While temperatures tend to rise in the country ahead of monsoon season, the deadly heatwaves have caused alarm among climate campaigners and Indian authorities.

The Australian organization Climate Council tweeted that human activity and the climate crisis are fueling the record-breaking rise in temperatures and drought, while Business Insider reporter Eliza Relman suggested that such heatwaves may represent a new normal for India and other parts of the world.

Climate change, which is fuelling the deadly heatwaves causing widespread devastation in India and other places, is driven by the burning of coal, oil and gas.

The Times in the UK reported that tens of thousands of residents in northern states have fled their homes in recent days, escaping communities where police have begun guarding water supplies as fighting has broken out over resources.

But as one observer, British Green Party politician Alex Armitage, pointed out, Indians who are able to flee their homes in search of cooler temperatures are likely in the minority and most will be forced to wait out the heatwave. Bihar, where many of the weekend’s deaths were recorded, is one of the poorest states in the country.

“The climate is no longer safe for people in India,” wrote Armitage. “Richer Indians will be able to migrate to cooler parts of the world. Poorer Indians will have to stay put.”

The climate is no longer safe for people in India. Richer Indians will be able to migrate to cooler parts of the world. Poorer Indians will have to stay put. They are being killed by carbon emitters in the global north. https://t.co/FLMWeQHRjb