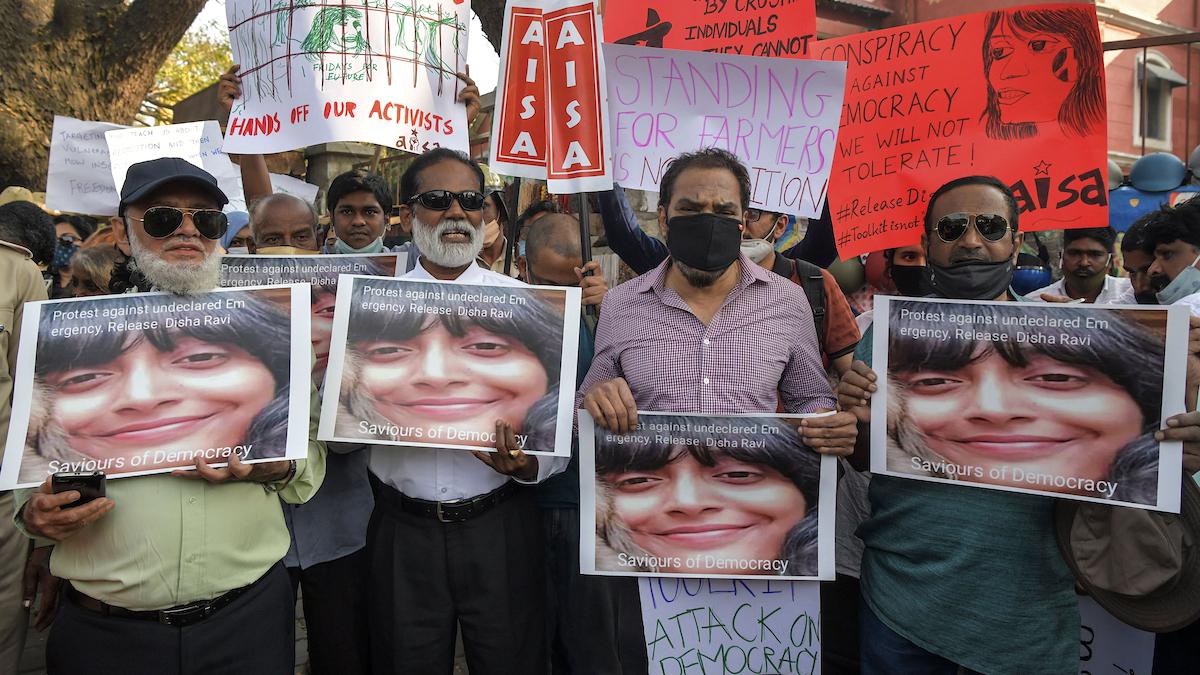 Activists belonging to various human rights organizations hold placards as they stage a demonstration against the arrest of the activist Disha Ravi by Delhi Police for her alleged involvement in the instigation of violence during the farmers' protest in Bangalore, India on Feb. 15, 2021. Manjunath Kiran / AFP via Getty Images

Public figures within and beyond India are demanding the release of Disha Ravi, a climate campaigner accused of sedition for allegedly editing and distributing an activist “toolkit” in support of the ongoing farmers’ protest that was tweeted by Fridays for Future founder Greta Thunberg.

A petition calling for Ravi’s release has over 12,100 signatures. Activists, actors, politicians, and others have condemned her weekend arrest, which followed months of farmer-led demonstrations against agricultural reforms and other policies of Prime Minister Narendra Modi’s right-wing Hindu nationalist government.

More than 50 academics, activists, and artists have released a joint statement denouncing Ravi’s arrest as “disturbing,” “illegal in nature,” and an “over-reaction of the state,” according to The Tribune, an English-language daily in North India.

#ToolkitsAreNotSedition #FreeDishaRavi
Preparing toolkits that make it easier for people of other countries to understand issues, support movements, is what activists all over the world do. Seeking global solidarity for farmers is not sedition. https://t.co/Bw7d0OoXJC

Arresting the activist, in her early 20s, “is an unprecedented attack on democracy,” tweeted Delhi Chief Minister Arvind Kejriwal. “Supporting our farmers is not a crime.”

Indian MP P. Chidambaram, also responded on Twitter, declaring that “the Indian state must be standing on very shaky foundations if Disha Ravi, a… student of Mount Carmel college and a climate activist, has become a threat to the nation.”

“India is becoming the theatre of the absurd and it is sad that the Delhi Police has become a tool of the oppressors,” he added. “I strongly condemn the arrest of Disha Ravi and urge all students and youth to raise their voices to protest against the authoritarian regime.”

Indian officials have arrested another young female activist, 21 yo Disha Ravi, because she posted a social media toolkit on how to support the farmers' protest. Read this thread about the sequence of events and ask why activists are being targeted and silenced by the government. https://t.co/ycUgDEqwdF

Delhi Police said in a series of tweets Sunday that Ravi — who co-founded a branch of the youth-led climate movement Fridays for Future in Bangalore — is a “key conspirator” in the “formulation” and “dissemination” of the toolkit. They also accused her of starting a related group on the messaging service WhatsApp.

The Guardian reports that Ravi “has now been charged with sedition and criminal conspiracy.” According to the newspaper:

At a court on Sunday Ravi broke down in tears and said she had only edited two lines of the toolkit file. Police alleged in their statement they had technical evidence that Ravi’s role in editing the toolkit was “many times more than the two lines editing that she claims.” The court remanded Ravi to five days in police custody after police requested time to “unearth her connections with the Sikhs for Justice.”

Previously, Delhi Police said the toolkit, a version of which is available on an encrypted site, “predates and indicates a copycat execution of a conspiracy behind” protests that turned violent on Jan. 26. The police added that “the call was to wage economic, social, cultural, and regional war against India.”

The available toolkit, which does not advocate violence, suggests actions such as supporting Indian farmers on social media using the hashtags #FarmersProtest and #StandWithFarmers, calling and emailing government representatives, and organizing or participating in on-the-ground protests.

“Disha is a dedicated climate activist,” a volunteer at the India chapter of Fridays for Future who declined to be named due to safety concerns told CNN. “It was difficult to wrap my head yesterday when I came to know about [her arrest], I was shocked.”

“This leads to a lot of caution,” the volunteer added. “We are asking for livable future… It is our right.”

We know #climatechange is an existential threat. World desperately needs the passion and commitment of the youth and their loud and strong voice to shake it to more action #FreeDishaRavi

Leo Saldanha, a member of the Environment Support Group in Bengaluru, which organized the petition, told Reuters that Ravi’s arrest is aimed at quashing dissent.

“This is their way of trying to scare away youngsters from raising their voice about anything,” Saldanha said of the Indian government. “This sends a message to all young people out there that, you know, shut up and stay at home or this is what is going to happen to you.”

Supporters of Ravi — including Indian actors Siddharth and Swara Bhasker — have turned to social media to call for her release using the hashtags #DishaRavi, #FreeDishaRavi, and #ReleaseDishaRavi.