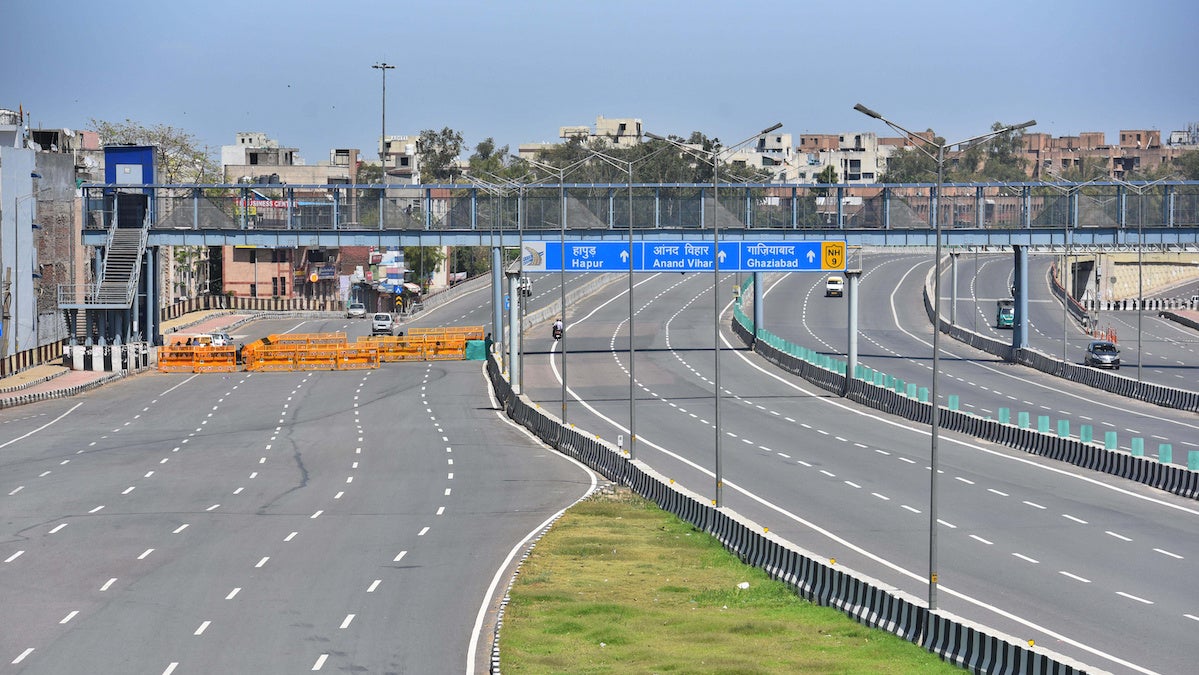 Deserted view of NH24 near Akshardham Temple on day nine of the 21-day nationwide lockdown to curb the spread of coronavirus on April 2, 2020 in New Delhi, India. Raj K Raj / Hindustan Times via Getty Images

India is home to 21 of the world’s 30 most polluted cities, but recently air pollution levels have started to drop dramatically as the second-most populated nation endures the second week of a 21-day lockdown amidst coronavirus fears, according to The Weather Channel.

While the complete shutdown of India’s economy was designed to stop the spread of COVID-19, it is having an ancillary health benefit of clearing the air that millions of people were choking on, according to CNN. As vehicles stay off the road, construction is put on hold, and factories stop production, the levels of microscopic particulate matter, or PM 2.5, start to drop.

“It is true that pollution levels are going down and will continue to be lower as a result of lockdown,” Pawan Gupta, senior scientist at the Earth Sciences of Universities Space Research Association at NASA’s Marshall Space Flight Center, told Earther in an email.

Recent heavy rains in the north and west of the country have also helped the country’s pollution levels, Gupta added. “Rain is a very effective aerosol removal process from the atmosphere and can bring down particulate matter values,” he said.

Since the March 25 lockdown that forced 1.3 billion Indians to stay home, air quality in New Delhi, usually the worst in the world, has dropped to “satisfactory” levels. The lockdown order shut down offices, schools, movie theaters, malls, markets and “non-essential” service providers. All modes of public transport such as metro trains, buses, inter-state trains and domestic and international flights for civilian movement have also been stopped, according to Quartz.

The effect of the lockdown has been dramatic. In New Delhi, where flights have been diverted because smog shrouded the airport, the air pollution levels have dropped 71 percent in just one week. On March 20, the air had an unhealthy 91 micrograms per cubic meter of PM2.5. On March 27, just a couple days into the lockdown, that level fell to 26 micrograms per cubic meter. Anything above 25 is considered unsafe, according to the World Health Organization, as CNN reported.

“I have not seen such blue skies in Delhi for the past 10 years,” said Jyoti Pande Lavakare, the co-founder of Indian environmental organization Care for Air, and author of upcoming book Breathing Here is Injurious To Your Health, to CNN. “It is a silver lining in terms of this awful crisis that we can step outside and breathe.”

Data from the Central Pollution Control Board of India’s Environment Ministry also showed a 71 percent decrease in nitrogen dioxide levels. Mumbai, Chennai, Kolkata and Bangalore have also recorded a drop in these air pollutants, according to CNN. In Mumbai, the financial capital, air quality levels in March 2019 averaged 153 on the Air Quality Index, which ranks as unhealthy to breathe, according to Reuters. New Delhi averaged 161 last March.

The tops of skyscrapers were visible and some residents told Reuters they could spot more stars than usual.

“The air quality is likely to slip into ‘good’ category soon. It is due to reduced vehicular traffic and rise in temperature,” said Kuldeep Srivastava, who heads the regional meteorological center at the Indian Meteorological Department, to The Weather Channel.

However, it is important to remember that this is a temporary reprieve that will return if industry and vehicular traffic return once the lockdown is over.

As for its effect on the climate crisis, The Weather Channel reported that the World Meteorological Organization issued a statement that read: “Efforts to control the coronavirus pandemic have reduced economic activity and led to localized improvements in the air quality. But it is too early to assess the implications for concentrations of greenhouse gases, which are responsible for long-term climate change.”