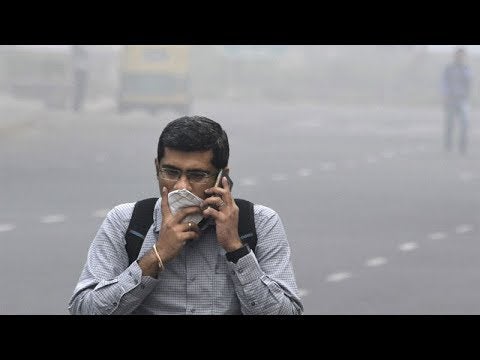 A four-day old noxious blanket of smog resting on the Indian capital, New Delhi, that officials expect to worsen over the weekend has prompted a plan to spray water over the city.

On Friday, the government announced, in an unprecedented move, it was finalizing plans to spray water from 100 meters above the city, Reuters reported. It remains unclear how much of the densely populated city of 22 million would be sprayed.

Government officials have closed 6,000 schools, banned all but the most essential commercial trucks, and are re-introducing an “odd-even” scheme which allows vehicle with plates ending in an odd number to operate on one day and even-numbered vehicles the next day.

Despite these measures, the air in New Deli has remained “hazardous” for days. Illegal crop burning, vehicle emissions, industrial pollution and dust from sprawling construction sites have contributed to the pollution emergency. By 11 am on Friday, the U.S. embassy air quality data for PM 2.5 showed levels had reached 550, while the safe limit is 50, according to U.S. embassy standards.

PM 2.5 is particulate matter about 30 times finer than human hair that can be inhaled into the lungs and blood stream, causing cardiac arrest, strokes, lung cancer and a host of other respiratory diseases.

Residents in New Delhi are reporting burning eyes, headaches and nausea. The air is filled with heavy metals and other carcinogens at 30 times WHO limits. Medical professionals consider those levels of pollution at least as harmful as 50 cigarettes a day.

The situation is so dire that doctors are seeing a change in health demographics. Doctors are now reporting that half of their lung cancer patients in New Delhi are non-smokers. Earlier in the week, Chief Minister Arvind Kejriwal, the leader of Delhi, called the capital a “gas chamber.”

New Delhi is surrounded by thirteen coal-driven power plants all lying within 185-mile radius of the city. The government ordered one of these plants closed in an attempt to mitigate the pollution. But Delhi’s pollution woes in part lie outside of the city. Delhi is neighbored by Punjab and Haryana—large agrarian states that burn millions of tons of crop waste every year around October in preparation for the winter wheat crop.

The National Green Tribunal, an Indian environmental governing body, previously directed the Delhi government and neighboring states to halt the burning of crop residue, but without sufficient funds for machinery, the practice continues. Government data shows the federal government had committed nearly $20 million to Punjab, Haryana, Rajasthan and Uttar Pradesh to help manage crop residue and farm mechanization. Government figures also showed that Punjab had not utilized the fund.