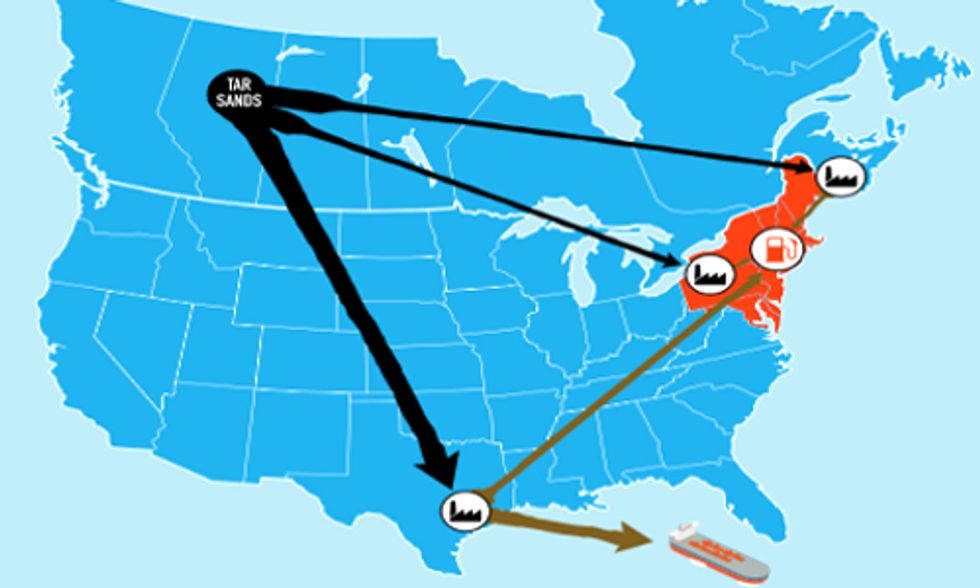 Motorists from Maine to Maryland will soon be filling their tanks with gas increasingly derived from dirty Canadian tar sands oil, a new report from the Natural Resources Defense Council (NRDC) says.

A flood of dirty fuel into these East Coast states would undercut their efforts to reduce carbon pollution. The NRDC report, What’s in Your Tank? Northeast and Mid-Atlantic States Need to Reject Tar Sands and Support Clean Fuels, found that under current plans, tar sands-derived gasoline supplies in 11 Northeast and Mid-Atlantic states (plus the District of Columbia) will soar from less than one percent in 2012 to 11.5 percent of the total by 2020, due to increased imports from Canadian refineries, fresh supplies of refined tar sands products from the Gulf Coast and production from East Coast refineries that would obtain tar sands crude via rail and barge.

An influx of carbon-intensive fuels into the region, which in 2012 was virtually tar sands-free, will hurt the efforts to combat climate change, which has already caused billions of dollars in damage in those states, according to the report.

“Dirty gasoline supplies in the Northeast and Mid-Atlantic are set to rise significantly, unless states take steps to keep out high-carbon fuel,” said Danielle Droitsch, director of the NRDC Canada Project. “By 2015 the volume of tar sands-derived fuel in the Northeast could grow six-fold, compared to 2012. Unless these states move as quickly as possible to clean energy, their efforts to combat climate change will suffer.”

The new Gulf Coast Pipeline, which will bring tar sands crude from Cushing, OK, to refineries on the Gulf Coast, makes it even more urgent for communities and policy-makers to take action to keep tar sands out of the region, she said.

All the states in the Mid-Atlantic and Northeast region have developed state action plans or enacted legal requirements to cut dangerous carbon pollution, which is the major driver of climate change. Among the steps they’ve taken: clean car and zero-emission vehicle performance standards, the purchase of clean buses and other fleet vehicles, and funding clean fuel infrastructure, such as charging stations for plug-in vehicles.

But these important carbon savings would be squandered by using gasoline from tar sands, which emits 17 percent more carbon pollution than conventional gasoline measured on a life-cycle basis (from initial extraction to burning in vehicles, or “well-to-wheels”.)

If the controversial Keystone XL pipeline for tar sands oil from Canada to the U.S. is approved by President Obama, the region’s share of gas from tar-sands crude could rise even further, according to the report.

The report said the state leaders with the support of citizens and local communities need to take steps to clean up transportation. “First, they should demand that gasoline suppliers disclose the origin and the carbon intensity of the fuel, i.e., the amount of carbon emitted measured on a ‘well-to-gas-tank’ basis,” Droitsch said. “Second, they should enact policies to discourage the greater use of carbon-intensive fuels.”

“People have the right to know what is going into their fuel tank,” Droitsh added.

The extraction and refining of oil from Alberta’s vast tar sands region, an area the size of Florida, is an energy-intensive process that destroys carbon-trapping forest lands and emits 81 percent more carbon pollution than conventional oil extraction and refining (‘well-to-tank’). NRDC and others oppose Keystone XL, which would carry Alberta’s tar sands oil through the heartland of America to Gulf Coast refineries, in part because it would enable a vast expansion in tar sands production. As NRDC has explained, Keystone XL is primarily an export pipeline, but some portion of its refined products would flow to the East Coast.

If dirty tar sands fuel continues on track to become a significant share of supplies in the Northeast and Mid-Atlantic, that would add millions more tons of carbon pollution to the atmosphere each year—just as the region is aiming to cut such pollution under the landmark Regional Greenhouse Gas Initiative, a nine-state pact to combat climate change by reducing carbon pollution from power plants, according to the report. Hurricanes Sandy and Irene—the type of extreme weather that will become more frequent with climate change—have already wreaked billions of dollars of damage in the Northeast and Mid-Atlantic states.

The report also underscores the importance of promoting a wide variety of low-carbon and no-carbon transportation alternatives, from cleaner fuels to buses and rail, bike lanes and pedestrian-friendly city planning.