Increase in Ocean Acidification Threatens Longevity of Shellfish and Coral 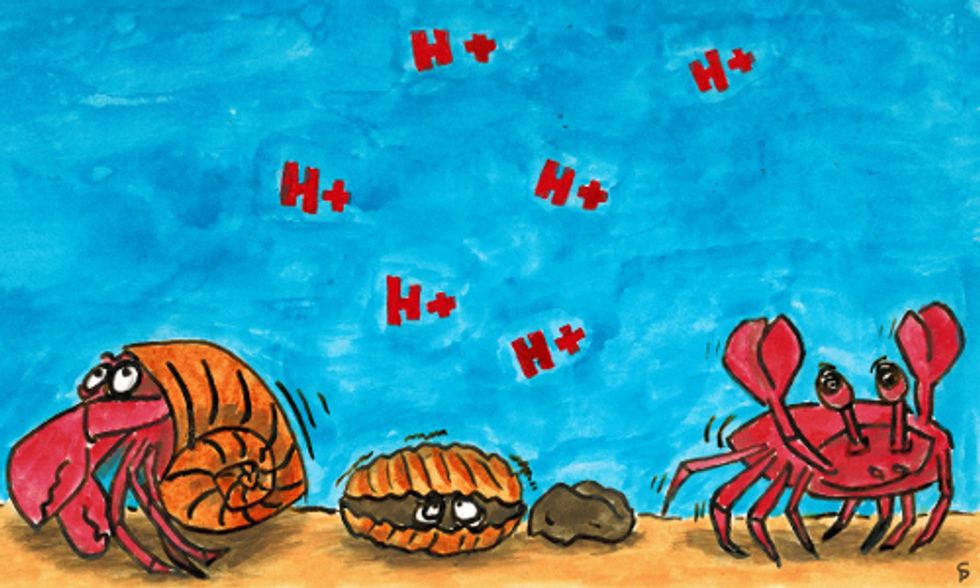 Our power plants and cars have pumped so much carbon dioxide into the atmosphere that the oceans are becoming more acidic. Something like a quarter of our carbon dioxide pollution dissolves into the seas, where it reacts with water:

Those leftover hydrogen ions at the right of the equation add up. The hydrogen ion concentration at the surface of the world’s oceans has increased by 26 percent since pre-industrial times, leading to a pH decline of 0.1. That might not sound like much, but it has been enough to kill off billions of farmed shellfish and punch holes in the shells of wild sea snails.

Fish, meanwhile, are thought to be suffering neurological effects of acidifying oceans, while vast mats of algae are expected to flourish.

The good news is that populations of animals naturally adapt to changes in their environments—and evolutionary changes to help some species cope with ocean acidification are already underway. The bad news is that changes in oceanic pH levels might be happening too quickly for animals to adapt, threatening scores of marine species with extinction.

I asked Ryan Kelly, an assistant professor at the University of Washington’s School of Marine and Environmental Affairs, and a coauthor of a recent BioScience paper about acidification that I wrote about for Pacific Standard, whether we could do anything to help species accelerate the rate with which they evolve needed adaptations.

“‘Accelerating’ species’ evolutionary adaptations to acidification would mean either tweaking the heritability of traits—and it’s unclear whether this is desirable, or how to do it; or increasing the strength of selection—which would mean making the selective impacts of acidification worse than they already are,” Kelly said. “So I’m thinking that, in an evolutionary sense, you don’t want to accelerate adaptation.”

Is there anything that we can do?

“What you do want to do, in order to protect marine ecosystems as we know them, is to preserve the adaptive capacity of the species that make up those ecosystems. That means preserving the genetic diversity that exists within those species, so that when the selective pressures of acidification happen, there will be some variability in those species’ responses. When there’s no genetic diversity, you get no variability in response to selective pressure, and natural selection and evolution doesn’t really work.”

Which means that we need to expand and improve the globe’s network of marine reserves, banning fishing in some places, and giving species the best possible shot of surviving the storm of acidity that’s building around them.

“From a conservation perspective, measures that preserve existing genetic diversity safeguard the adaptive capacity of species and ecosystems. This means working to maintain large population sizes and not fragmenting habitats, which are common conservation measures.”

As U.S. Secretary of State John Kerry led workshops in June dealing with ocean acidification and other ocean health issues, President Barack Obama’s administration proposed sweeping expansions of marine reserves surrounding remote Pacific Ocean atolls. The move would limit fishing for tuna and other species, helping to protect top predators that are critical for ecosystem health, while also protecting smaller species that are killed as bycatch.

“This is an important step in trying to maintain the health of this region and, as a result, the surrounding areas in the Pacific,” said Lance Morgan, president of Marine Conservation Institute. “It will give us more resilience into the future. We’ll have to replicate this and do more work in other areas as well, but it is an important step.”

Meanwhile, the National Oceanic and Atmospheric Administration is planning to expand the boundaries of Gulf of the Farallones National Marine Sanctuary and Cordell Bank National Marine Sanctuary, both of which lie off the West Coast, where strong upwelling leads to especially severe rates of ocean acidification. Meanwhile, Kiribati recently announced that it would close an area the size of California to fishing to help wildlife recover.

Ocean acidification is not a major consideration in the creation of marine reserves, but it’s a growing threat against which the reserves can help populations of wildlife evolve natural defenses.