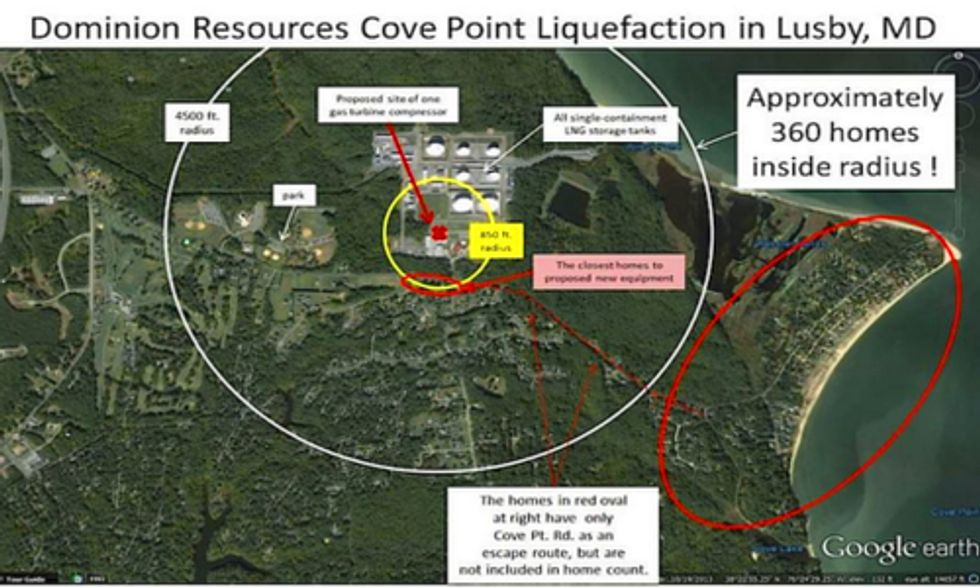 In light of the concerns and questions outlined below, Calvert Citizens for a Healthy Community is demanding that FERC complete an objective and transparent quantitative risk assessment for Dominion's proposed LNG export facility—an assessment open to public scrutiny and including all potential mishaps, including the worst-case domino effect of explosions like the one that occurred last week in Plymouth.

If FERC refuses to do such an analysis, we call on Gov. O’Malley (D-MD) to order the Maryland Department of Natural Resources (DNR) to conduct a similarly thorough updated risk analysis. With our and our neighbors’ lives literally on the line, we deserve no less.

WHAT WE KNOW: Dominion’s plan for Cove Point poses unique safety risks and vulnerabilities that could make the consequences of a similar explosion far more severe.

The still unexplained explosion and subsequent fire at the Williams Northwest Pipeline Facility in Washington State shook homes more than a mile away, injuring five workers and sending a “mushroom cloud” of black smoke into the air, according to the Associated Press. Of special concern to Lusby residents, shrapnel from the explosion caused the failure of a single containment LNG storage tank, which led to the formation of a flammable vapor cloud and the evacuation of residents within a two-mile radius. As reported by Reuters, local authorities feared that a second blast could level a 0.75 mile "lethal zone" around the plant.

The day after the horrific incident, LNG expert Jerry Havens, who helped develop the vapor dispersion models that federal regulators used until recently to evaluate hazards from similar facilities, went on record with The Oregonian:

We’re still learning about the safety of all these ventures because we’re moving into a whole new area where we’re handling such large amounts of LNG. … We’re talking about so much energy and so much potential for a catastrophic event to occur. We should really think about whether we should allow these things to be built close to any population center.

The events in Plymouth, WA, were a chilling warning for Lusby residents, especially given the following factors:

FERC is well aware of the Algeria incident—they sent representatives to study it. Bill Powers, an engineer based in California who has studied LNG terminals, along with siting issues for both onshore and offshore proposals, also studied the Skikda, Algeria plant disaster. Noting that Halliburton engineers had missed a weak link in their safety planning for the facility, Powers delivered this stern warning:

That highlights the importance of putting these facilities in places where, no matter what, people will not be at risk. If a company like Halliburton missed a scenario that could cause this, that tells us that we cannot account for all possible accident scenarios at LNG facilities.

The members of Calvert Citizens for a Healthy Community are demanding answers that go beyond the mere assurances Dominion executives have given citizens and local leaders that no risks from the new expansion will go offsite. In fact, Lusby citizens have recently become aware of a report commissioned by the Maryland DNR that appears to directly contradict Dominion’s assurances:

The DNR study of the last expansion appears to be much more extensive from a safety perspective than the limited prescriptive hazard assessment utilized by FERC. The worst mishap scenario referenced in the FERC Environmental Impact Statement for the 2006 Dominion Cove Point expansion was a one hour LNG storage tank leak from a 24 inch sump line into a sub-impound area. The Plymouth, WA, incident proves that a one hour LNG leak from an LNG tank is not the worst-case scenario at an LNG facility in the U.S.

Lusby residents are demanding to know:

WHAT WE DEMAND: FERC must complete a comprehensive quantitative risk assessment of the worst-case, compound explosion hazards of Dominion’s LNG export facility—involving the full and open participation of residents living in its shadow.

Dale Allison, a father from Lusby, MD, who is a retired U.S. Navy civilian aerospace engineer, responded to the news of the Plymouth LNG facility explosion with a fourth submittal to FERC’s docket on the Dominion Cove Point LNG export expansion, reiterating his concerns regarding the explosive hazards which residents will face with the addition of a utility-scale power plant and a large-scale, extremely hazardous liquefaction train at the already crowded footprint of the Dominion property, which is less than a half mile from his home. Allison reacted to the events in Plymouth:

The unfortunate mishap which just occurred at the Plymouth LNG facility once again highlights the absolute requirement that LNG terminals only be sited in remote locations. Cove Point is not that site.

But, if you insist on proceeding, here is what we require. Because the proposed Cove Point liquefaction site is so tightly packed with hazardous process equipment and materials, and because there are so many homes in close proximity, we demand that a full quantitative risk assessment be performed that not only looks at all individual mishaps, but also addresses all possible mishap escalations. Unfortunately, the Plymouth, WA, mishap also shows us that escalations are REAL. A full QRA is the only way that all residents living close to the Cove Point plant can possibly know the full cumulative risk they face—their probability of loss of life—based on their separation distance from the plant.

Dale’s wife Sue Allison, who has become quite adept at translating her husband’s engineering jargon for neighbors, explained it this way:

We continue to hope that FERC will require an Environmental Impact Statement for Cove Point, but whether the safety analysis for the Dominion expansion is done as part of an Environmental Assessment or an EIS, it must be done right and it must consider worst-case scenarios for residents, which would include escalation events. Residents are often told by our elected officials that we really don’t have a right to complain about the expansion because we bought our homes knowing the plant was there and the expansion will be built inside of the existing Dominion footprint. But the fact that Dominion’s Cove Point facility is constrained by that footprint is exactly why we should be concerned—the closer the hazardous equipment and materials are on site, the greater the chances are that a mishap can escalate.

I recently spoke to a mother of young children whose house faces the plant on Cove Point Road. She explained that she is very anxious about the expansion. FERC’s safety analysis must be able to show that mother, based on how close her house is to the proposed expansion, exactly what her family’s safety risk would be should any foreseeable accident happen on site, which could include an explosion, a full tank leak, or both. If an objective QRA, done right, shows that the expansion will subject residents to an unacceptable level of safety risk, Dominion and our Calvert County government should start planning on buying some houses.

The lesson from Plymouth is clear: It can no longer be “business as usual” at FERC where the safety of residents is concerned. The stakes are way too high at Cove Point. The members of Calvert Citizens for a Healthy Community continue to believe that Cove Point is not an appropriate site for such a hazardous endeavor.

If FERC refuses to do such an analysis, we call on Gov. O’Malley to instruct the Maryland DNR to do another independent risk analysis for the current expansion—one that will become a public document.

We will no longer accept vague assurances about Dominion being a “good neighbor.” It is time to get all the safety facts out on the table.