In Antarctica, Time Is Melting Away 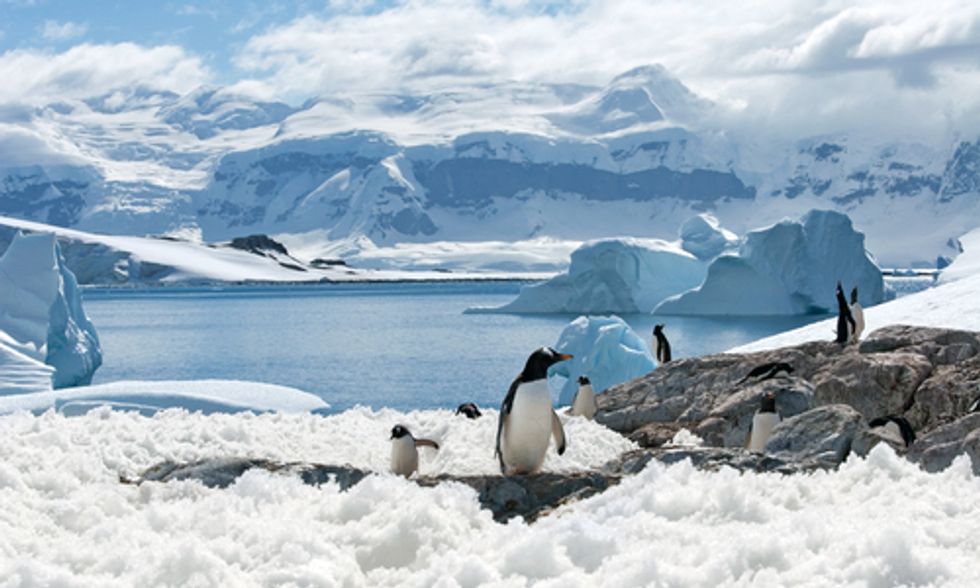 Of the world’s seven continents, Antarctica is the coolest—literally. Ninety percent of the planet's ice and 61 percent of the globe’s freshwater are locked up in the vast ice sheets covering the southernmost continent, which covers approximately 4.5 million square miles. And not only is it the coldest place on Earth, it’s also the driest and windiest.

This month at the annual CCAMLR meeting in Hobart, Tasmania, and for the fourth time since 2012, delegates will consider proposals for marine protected areas in the Ross Sea and the waters off East Antarctica.
Photo credit: Shutterstock

The ice-covered landmass and the Southern Ocean surrounding it are among the last almost pristine areas on the planet. Just one statistic provides a sense of how important this is: Nutrients that well up from Antarctica’s deep ocean are carried away by currents and ultimately supply 70 percent of the vital, nourishment-rich water that cycles throughout the rest of the world, breathing life into coastal fisheries far north of the equator.

But even such a remote place feels the consequences of human activity, as whaling, fishing and climate change have all had an impact on the array of life in the Southern Ocean. Thousands of species, from whales to krill, live in the icy southern waters, including some that have thrived there for millions of years. But increased commercial fishing, combined with rising temperatures and ocean acidification, is already affecting krill around the Antarctic Peninsula—prized by fishing fleets for animal feed and omega-3 supplements. Krill is the base of the Southern Ocean food web and fewer krill translate into less food for the Antarctic wildlife that eat them, including whales, seals, and many penguin species.

Industrial fishing isn’t limited to the tiny krill. At the other end of the Antarctic food web, the catch of top predators such as the Antarctic toothfish (popularly known, on U.S. restaurant menus, as Chilean sea bass) is having an increasing impact on the ecological balance in the Ross Sea, the most southerly marine area in the world, where toothfish stocks are declining because of the fishing activities of the past 20 years.

However, we can still preserve many of Antarctica’s unique biological resources. Management of the region is governed by the Antarctic Treaty, a visionary agreement signed by 12 nations at the height of the Cold War that declared the continent a place for peace and science. In 1982, the Commission for the Conservation of Antarctic Marine Living Resources (CCAMLR) was established to manage all fishing activities in the Southern Ocean. This international body has since grown to include 24 countries and the European Union, with the mandate to conserve the biodiversity of the Southern Ocean.

Under CCAMLR’s consensus rules, as with many multi-governmental bodies, every country must agree to any proposed decision. For the most part, this has meant that CCAMLR has acted wisely in governing fishing activities around Antarctica. And, in 2005, CCAMLR agreed to create a network of marine protected areas under its jurisdiction.

Unfortunately, despite almost a decade of discussion and years of work, CCAMLR has failed to make good on the promise to establish this network. Why? Because some CCAMLR members refuse to engage in substantive debate about the network, instead creating procedural roadblocks that waste time, money, and political goodwill.

This month at the annual CCAMLR meeting in Hobart, Tasmania, and for the fourth time since 2012, delegates will consider proposals for marine protected areas in the Ross Sea and the waters off East Antarctica. Together these protected areas, which include fully protected marine reserves, would protect 1.2 million square miles of ocean—the largest in the world—and allow critical scientific research into and evaluation of Antarctica’s ecosystem in the face of climate change.

It would be a tribute to the Antarctic Treaty if the countries that have blocked these proposals—with tactics such as questioning CCAMLR’s legal authority to create marine reserves—would reverse course this month and, in the spirit of international cooperation, lead CCAMLR to a victory for the entire Southern Ocean. With major change already having arrived in the region, Antarctica’s ocean and the life that depends on it can’t afford to wait much longer.