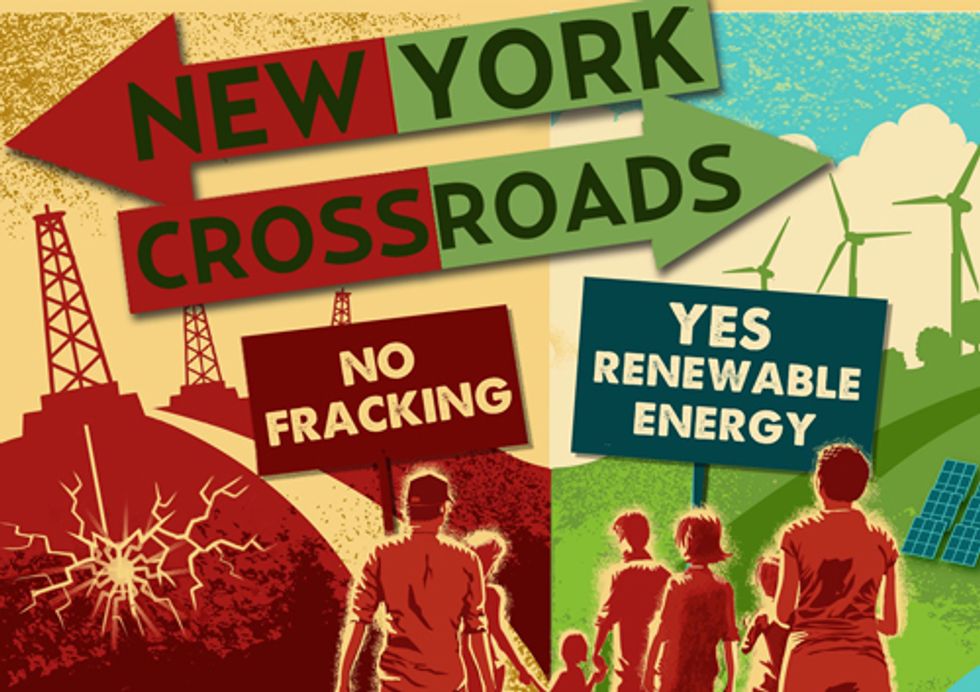 [Editor's note: Students from the State University of New York (SUNY) School of Environmental Science and Forestry in Syracuse, NY held their 2013 graduation ceremony yesterday. SUNY ESF's motto is "Improve Your World." Dr. Sandra Steingraber was given an honorary doctoral degree for her life's work on environmental health and science, including her work to fight fracking in New York. She was given a standing ovation for her inspirational speech (see below) and called on our future environmental scientists to take action.]

What an amazing moment. Thank you. And what makes this a special honor for me is not just that SUNY-ESF is the nation’s oldest and most venerable college of environmental science, which is my field of study, too, but also that its official motto consists of the three words that I happen to live by.

Those words—for the guests here who may not know them—are not a Latin phrase about the nature of truth and wisdom. They are a set of simple directions in English.

But embracing improve your world as your personal motto for life requires at least two things. One is to possess really good data on what’s wrong with the world. And that means staying awake and paying attention and being willing to look at hard truths without flinching.

This week, climate scientists reported that carbon dioxide levels in the atmosphere have overshot 400 parts per million. That’s a problem. Carbon dioxide traps heat, destabilizes our climate, and warms and acidifies our oceans in ways that are harmful to the world’s plankton stocks. We need plankton. They provide us half the oxygen we breathe.

Last month, ecologists reported that the world’s bees are in trouble. That’s a problem. Insect pollination is an ecosystem service—aka unpaid labor donated by another species—that provides us one third of the food that we eat.

Last year, a financial analyst reported, in the science journal called Nature, soaring commodity prices and declining grain harvests due, in no small part to our increasingly unreliable climate. In order to stabilize the climate, we would need to leave at least 80 percent of the world’s proven fossil fuel reserves in the ground.

“As a former oil analyst,” says the author, Jeremy Grantham, “I can easily calculate oil companies’ enthusiasm to leave 80 percent of their value in the ground—absolutely nil.”

That’s a big problem. How do we improve our world if there exists a fundamental conflict between the business plans of the fossil fuel industry and the conditions for life itself? We can’t.

Are you flinching yet?

Well, what if we blew up the nation’s bedrock and fracked out the bubbles of natural gas they contain and burned those instead of coal? Would that keep us from hurdling off the cliff of climate catastrophe?

The data say no.

Well, then, what if we divorced the fossil fuel industry, and, over the next two decades, transitioned entirely to wind, water and solar energy while, at the same time, reducing our per capita energy consumption by half. Would that work? In fact, that’s the only course that gives us a fighting chance.

Is it doable? The best data we have, from Stanford University, say yes.

What if we turned New York State into a model for that national plan by closing the door to fracking and convincing our governor to embrace a plan of economic development based on renewable energy? What if farmers could supplement their income not by allowing the gas industry to turn their land into an industrial proving grounds, blasting apart the bedrock under their fields and pastures with a club of toxic chemicals as though it were a piñata, but, instead, by paying them to erect solar arrays that fed into smart grids, into which we could then plug our electric cars?

Is that doable? Is it realistic? Is it more or less realistic than imagining we can carry on without pollinators, plankton stocks, uncontaminated drinking water and reliable grain harvests?

Does that plan—fossil fuel abolition—allow us to improve the world? In my mind and heart, in the way I read the data, the answer is yes.

And that brings us to the second thing that improve your world requires: the willingness to do something based on the data.

My date today is my friend and colleague Renee Vogelsang, who is an organizer for the anti-fracking movement. Do you know what’s on Renee’s email signature line? A quote from the Quaker civil rights leader and gay rights activist Bayard Rustin: "The proof that one truly believes is in action."

Now I am a contemplative person. I research a lot and write a lot. Renee contemplates too, but she almost never has a thought without acting on it. Renee and I met in 2011 when, thanks to all the research and writing I do, I became the lucky winner of the Heinz Award, which comes with a $100,000 cash prize. I decided to donate that check to the anti-fracking movement, and it became the seed money for the coalition, New Yorkers Against Fracking.

It began with a handful of organizations but—thanks to Renee and her activist colleagues—New Yorkers Against Fracking has now blossomed into a mighty alliance of more than 200 groups, 1,000 businesses, 500 faith leaders, student chapters on every campus, and dozens of scientists and medical professionals. Just like the abolitionists of old, we are a powerful social movement for change.

Here’s the amazing secret about combining an unflinching willingness to look at the data with political action: it makes you happy. It gives you purpose. It makes brave. It makes you a hero.

The people who are truly depressed and scared about our environmental situation are the people who aren’t doing anything about it. They suffer from what psychologists called well-informed futility system. They suffer from what I call being a good German in the face of an ecological holocaust. But that’s a choice. Instead of closing your eyes to hard environmental truths and pretending everything is fine, you could choose to be a member of the French resistance. You could choose to be an abolitionist. You could choose to fight.

It turns out that it’s nobody’s job to take the hard truths of environmental data into the political arena and make sure they inform our laws and policies and our economic structures. We have to do that work ourselves.

And doing it is what makes science moral.

Doing the work of political action has taken me to all kinds of places—to the White House, to the European Parliament, to town halls and church basements. And last month, it took me to the Chemung County Jail. As an inmate. I was sentenced to 15 days of incarceration for an act of civil disobedience that involved blockading a compressor station on the banks of Seneca Lake. This lake is a source of drinking water for 100,000 people and under it, in abandoned salt caverns, the gas industry seeks to store billions of gallons of fracked, pressurized explosive petroleum gases trucked in from out of state.

Inside cell #1 in cell block 5D, I wrote my annual Earth Day lecture with a stubby pencil on scraps of paper and then managed to smuggle it out. I consider it to be the most important scientific statement I’ve ever made.

And, while incarcerated, I learned some new skills—like how to walk up and down a set of stairs while wearing ankle manacles, handcuffs and an orange jumpsuit.

It’s a good skill to have. And it’s easier than walking down a hospital corridor while pushing an IV drip and wearing a backless, blue cotton gown, which is the uniform of a cancer patient—an identity of mine for 30 years.

The actions that caused me to wear an orange jumpsuit were not neutral.

But neither were the actions taken by the industries in my hometown that contaminated the air and water of my childhood with chemical carcinogens and caused me to grow up as one data point in a cluster of cancers.

I was diagnosed with bladder cancer at age 20 and it was that experience that led me to environmental science in the first place.

Today I wear an academic robe. But I would rather wear an orange jumpsuit so that my children do not have to wear a blue hospital gown. Wouldn’t you?

I’ll close with an invitation, which you are the first to receive. To all you newly minted environmental scientists and those who love you, to all those who take up the motto improve your world as your life’s work, join me in Albany on June 17—which is the 128th anniversary of the Statue of Liberty’s arrival in New York. On June 17, we will rally and march to declare New York’s independence from the fossil fuel empire: no to fracking; yes to renewable energy.

I believe this will be the lunch-counter moment of our age, and I warmly invite you to march with me. My invitation is especially extended to SUNY ESF’s illustrious graduate, Commissioner Joseph Martens of New York’s Department of Environmental Conservation. Join us, Joe!

What we love we must protect. That’s what love means.

And to all of ESF’s graduates today: Congratulations, stumpies! In the days ahead, I look forward to blending your institution’s motto, improve your world, with that of my own organization: NOT ONE WELL.