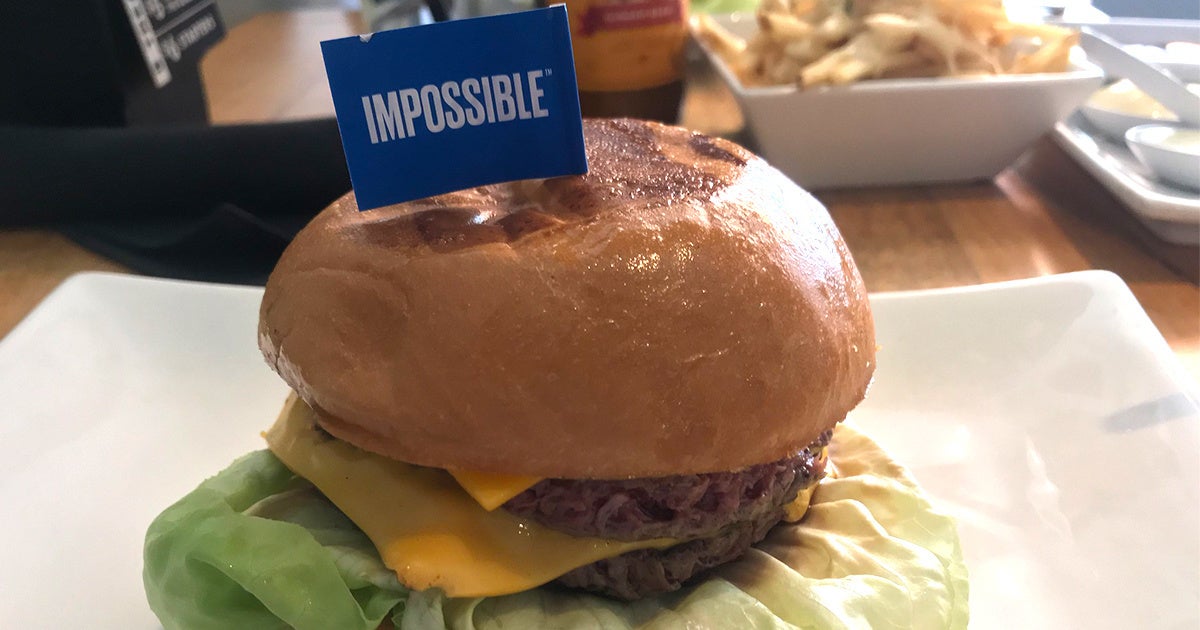 Throughout the U.S., major food brands are trying to get rid of GMO ingredients — not necessarily for the right reasons, but because nearly half of consumers say they avoid them in their food, primarily for health reasons.

But the CEO of Impossible Foods, purveyor of the Impossible Burger, is bucking that trend.

The manufacturers of the controversial veggie burger just announced that in the future, due to “high demand” for the product, its plant-based patties will be made using GMO soy.

The formula change was made to ensure the smooth rollout of the Impossible Burger in Burger King restaurants. The soy formulation is apparently better able to withstand Burger King’s trademark flame grilling. As a result, in early in 2019, Impossible Foods dumped the textured wheat protein it had been using and replaced it with soy protein concentrate instead.

Pat Brown, founder and CEO of Impossible Foods, publicly defended the move. But a closer look reveals that Brown’s claims about the healthfulness and sustainability of “Impossible Burger 2.0” just don’t stack up.

Here are six reasons the CEO of Impossible Burger is wrong when he claims that GMO soy is “the safest and most environmentally responsible option” for scaling up production of the fake meat product — a product that already uses a genetically engineered yeast, called heme, as its key ingredient.

When the switch to soy was first made. Sue Klapholz, Impossible Foods vice president of nutrition & health, said that “Soy is not only safe; it’s accessible, nutritious.”

That’s not quite true.

Results from studies showing healthful properties of fermented soy products like tofu or miso are sometimes used to support the healthfulness of other, more highly processed types of soy.

But all soy is not created equal.

In the messy world of soy studies, where “soy” can be defined as almost anything with soy in it, there are just as many studies showing no or only marginal benefits, and in some cases, potential for harm — e. g. interference with thyroid medication — from diets high in soy.

Soy protein isolates and concentrates are made from defatted soybean flakes that have been washed in either alcohol or water to remove the sugars and dietary fiber. The flakes are then processed into powders or “flours.”

Alcohol is the most common process, as it produces products with a neutral taste. But the beneficial isoflavones in soy are removed by this method. Soy protein concentrate has the lowest level of healthful isoflavones — including daidzein, genistein and glycitein — of any form of processed soy.

There are other differences between the various types of soy. A 2014 study comparing GMO and organic soy beans found small but statistically significant differences in the nutritional quality: The organic soybeans had slightly higher protein levels and lower levels of omega-6 fatty acids. Omega-3 fatty acids showed no significant difference. Both fats are essential in human diets, but U.S. eaters tend to consume a higher ratio of omega-6 to omega-3 fatty acids than is healthy.

2. Higher Use of Pesticides

Brown says that “careful analysis” has “conclusively shown” GMO soy is “better for the environment than the alternatives.”

Absolutely untrue. GMO soy, whether fed to cows or people, is bad for the environment.

A 2013 Food & Water Watch study, based on U.S. Department of Agriculture (USDA) and U.S. Environmental Protection Agency data, found that planting GM crops quickly resulted in the growth of herbicide-resistant “superweeds” which caused farmers to increase their herbicide use.

That report echoed the findings of another study produced by Washington State University research professor Charles Benbrook in 2012. In 2016, research from University of Virginia confirmed that glyphosate-resistant weeds have led to a 28-percent hike in herbicide use on GM soybeans compared with non-GM.

This has also been seen in other countries, including Canada, Brazil and Argentina.

There is also evidence that glyphosate, the active ingredient in Monsanto’s Roundup weedkiller, accumulates in GM soy. The same study that found GM soy is nutritionally inferior to organic, and that GM-soy contained high residues of glyphosate and its toxic breakdown product AMPA, while conventional and organic soybeans were free of these agrochemicals.

That may help explain why a recent laboratory analysis by Moms Across America found glyphosate residues in the new formula Impossible Burger. The levels of glyphosate and its toxic breakdown product AMPA were low (11 ppb) but as the Moms note, evidence from animal feed studies indicates that just 0.1 ppb of glyphosate can destroy gut bacteria.

Other studies of animals fed GM foods and/or glyphosate show worrying trends, including damage to vital organs like the liver and kidneys, damage to gut tissues and gut flora, immune system disruption, reproductive abnormalities and even tumors.

Agrichemical companies continue to claim that glyphosate is safe. Yet glyphosate is a “probable human carcinogen” according to the World Health Organization (WHO), and its maker Monsanto (Bayer) has recently been ordered to pay out billions in compensation to victims who developed non-Hodgkin lymphoma as a result of using the weedkiller. More cases are pending.

3. No Benefits for Farmers

According to Brown, the company decided to source “American-grown, milled and processed GM soy” that is “from farms in Iowa, Minnesota and Illinois” because there just isn’t enough non-GMO soy to meet demand.

There is no question that GM soy is more plentiful than non-GM soy in the U.S. In fact, the U.S. grows more soybeans than any other country except Brazil. According to the USDA, more than 90 percent of the soybeans harvested on U.S. farms are genetically engineered to withstand herbicides, especially Roundup.

That should translate into more crops to sell, but an in-depth investigation by the New York Times found that, in addition to increasing pesticide use, genetic modification in the U.S. and Canada has not brought the expected increases in crop yields.

This echoes the findings of a 2016 National Academy of Sciences report that found “there was little evidence” that the introduction of genetically modified crops in the U.S. had led to yield gains beyond those seen in conventional crops.

Right now, U.S. farmers are suffering from a glut of soy, thanks to ongoing trade disputes with China, which have resulted in low prices and farm bankruptcies.

The adoption of GMO herbicide-resistant crops like soy has favored the use of herbicides over tried and tested methods of weed management, such as crop rotation.

In addition to creating superweeds, glyphosate-based herbicides damage microbial life in the soil, which makes crops more susceptible to diseases. They are toxic to a range of aquatic organisms and also kill beneficial “weeds” like milkweed, a major food source for the Monarch butterfly.

As weeds become resistant, older and stronger pesticides such as 2,4-D or dicamba, are being used. In 2017-18, “dicamba drift” was responsible for damage to an estimated 5 million acres of non-GM soybeans in 24 states, in addition to numerous specialty crops and wild plants.

Globally, soy plantations have been responsible for wholesale clearing of forests and savannahs in places like Brazil, with the added effect of contributing to climate change. In the U.S., land converted to soy production has typically been pre-existing agricultural land and so is not linked to deforestation. But increasing demand for soy is destroying American prairies. Analysis of satellite data has shown that between 2006 and 2011, farmers in the Dakotas, Minnesota, Iowa and Nebraska had converted 1.3 million acres of grassland into soybean and corn production.

These monocultures are bad news for wildlife, because they destroy habitats for a wide range of wild creatures, from ground-nesting birds to pollinators like bees and butterflies.

But crop monocultures also lead to mono-diets. Agricultural diversity ensures a healthier environment and greater food security on a global scale. But the over-focus on cash crops like soy means that today just a handful of crops now dominate diets around the world. This new global diet has more calories and less nutrition, and is responsible for the global rise in non-communicable diseases such as obesity, heart disease and diabetes.

5. No ‘Scientific Consensus’ Around Safety

Brown proclaims there is “scientific consensus that GMOs are safe for consumers and the environment — a view now endorsed by the American Medical Association (AMA), the National Academy of Sciences and the World Health Organization.”

But Brown’s statement is factually untrue.

A closer look at these claims shows that the AMA’s Council on Science and Public Health statement opposing GMO labeling did not claim GMOs are safe. It acknowledged “a small potential for adverse events … due mainly to horizontal gene transfer, allergenicity and toxicity.” The AMA recommended mandatory safety assessments prior to release of GM foods — a system which, as the AMA pointed out, is not in place in the U.S.

The National Academy of Sciences has not issued any blanket claims of GMO safety. It did issue a report in which it analyzed a range of plant-breeding techniques and concluded that GM posed a higher risk of introducing unintended changes into food than any other crop breeding method other than mutation breeding, a method in which plant genomes are bombarded with radiation or chemicals to induce mutations.

The WHO has stated: “No effects on human health have been shown as a result of the consumption of GM foods by the general population in the countries where they have been approved.”

But take a look at the text that preceded that sentence: “Different GM organisms include different genes inserted in different ways. This means that individual GM foods and their safety should be assessed on a case-by-case basis and that it is not possible to make general statements on the safety of all GM foods.” The WHO also recommends that “adequate post-market monitoring” is carried out to ensure the safety of GM foods.

Yet such monitoring is not carried out anywhere in the world.

In fact, GM foods were not subjected to human trials before being released into the food chain. Their human health impacts are not being studied by any government agency, nor by the companies that produce them.

That’s why nearly 300 independent scientists from around the world issued a public warning that there was no scientific consensus about the safety of eating genetically modified food, and that the risks, as demonstrated in independent research, gave “serious cause for concern.”

Brown says “we believe in our consumers and respect their right to consider the facts and decide for themselves.” He adds that the inclusion of GMO soy will lead to “noise from anti-genetic engineering fundamentalists.”

But concerns about GMOs aren’t just “noise.” They persist because they are legitimate, and because consumers want facts from independent researchers and other sources who are not paid mouthpieces for the GMO industry, or brands with a bias.

U.S. consumers overwhelmingly want GMO foods labeled so they can make real informed choices. Impossible Foods has chosen to ignore both legitimate concerns and the desire for choice by insinuating its fake meat burger onto the market via independent restaurants, large restaurant chains, theme parks, museums, stadiums, college campuses and corporate offices — places where no food labeling is required and where customers are least likely to ask questions.

It’s time to demand more from the food we eat, better protection from our regulators and a higher level of truthfulness and transparency from food brands.

If you want to let the CEO of Impossible Foods know that he’s wrong about GMO soy, click here.