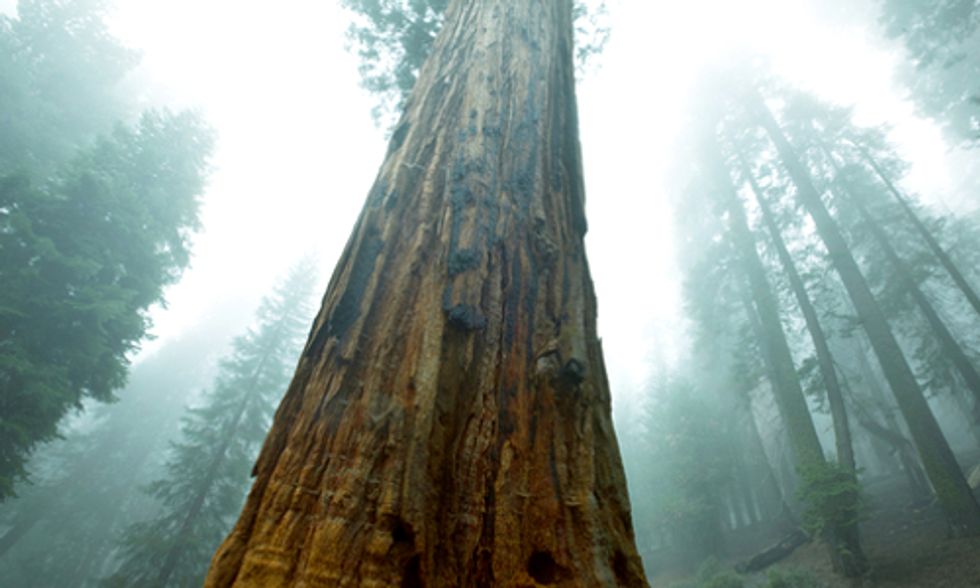 We know that forests are biodiversity-rich, and we know they provide us with essential ecosystem services, such as regulating water flows and influencing weather patterns. One ecosystem service often discussed these days is the role of forests in helping regulate the amount of the greenhouse gas—carbon dioxide (CO2)—in the atmosphere. A new analysis in Nature, one of the top scientific journals, demonstrates that big, mature trees play an important part in this role.

Beyond providing essential boidiversity, the oldest trees in a forest capture the most carbon from the atmosphere, a new study finds.
Photo courtesy of Shutterstock

Forests store large amounts of carbon that would otherwise contribute to climate change. They store nearly 300 billion tons of carbon in their living parts (biomass)—roughly 30 times the annual amount of emissions created by burning fossil fuels. But when forests are degraded or destroyed, this carbon is released into the atmosphere.

It used to be thought that only young forests captured (or sequestered) carbon from the atmosphere whilst they were growing, and that ancient (also called primary or old-growth) forests simply stored this carbon. However, several recent studies have now shown that intact ancient forests also take up carbon from the atmosphere¹. This new study could help explain how ancient forests continue to take up carbon.

The researchers have found that carbon uptake of trees (as measured by growth rates) continuously increases with their size because the overall leaf area increases as they grow. This enables bigger trees to absorb more carbon from the atmosphere. Thus, the oldest trees in a forest capture the most carbon from the atmosphere. These oldest trees are to be found in ancient forests. Importantly, older trees are also more valuable for biodiversity than younger trees because they support a wider range of species. For example, hollows and snags provide habitats for nesting birds.

The authors warn, however, that forest dynamics are complex: large trees are subject to higher mortality rates than young trees and the number of trees in a given area may be higher in a young forest. These factors may offset the increased growth of mature trees in a forest. Nonetheless, it is now evident that big, old trees are highly important components of ancient forests, in terms of biodiversity and both carbon uptake and storage.

Selective logging in forests usually removes the bigger trees, and much deforestation occurs in ancient forests, which contains these older trees. This new study emphasises the double whammy of removing these trees: removal releases carbon into the atmosphere where it contributes to climate change, but also removes an important sink that would take up some of mankind's carbon emissions from the atmosphere. That’s why Greenpeace is campaigning for zero (gross) deforestation, globally, by 2020.