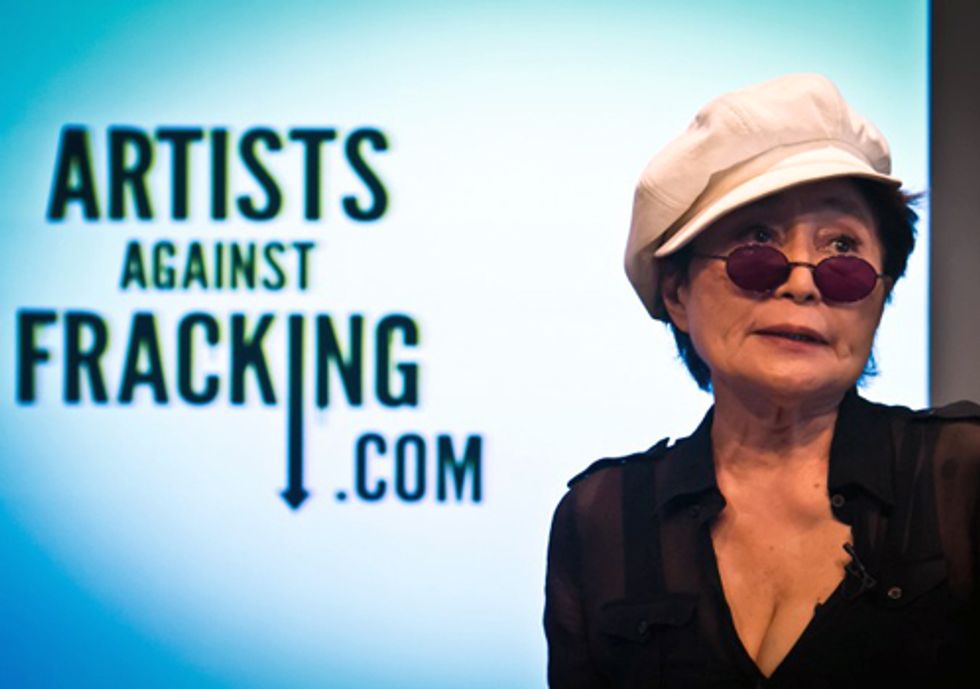 My husband, John Lennon, and I bought a beautiful farm in rural New York more than 30 years ago. We loved the tranquility and beauty of the area. Our son, Sean, spent many precious days there growing up. Our family still enjoys it now.

Like the rest of our state, this peaceful farming community is threatened by fracking for gas. Giant pipelines, thousands of tractor-trailer trucks ripping up roads, loud air compressors, air pollution—and most of all, the certainty of poisoned drinking water.

Certainty is the right word, according to the engineers, as the wells drilled for fracking will leak. According to industry documents from the gas drilling giant Schlumberger and other studies, six percent of the wells leak immediately, and more than 60 percent of them leak over time. And no wonder they leak—the pressures of the earth thousands of feet under the ground cracks the cement well casings. The big variations in temperature along the well at various depths expand and contract the cement until it cracks and leaks.

And what leaks from the wells?

Toxic hydrocarbons like benzene and methane that are under the ground. And the toxic chemicals injected with millions of gallons of water at high pressure to fracture the bedrock to get at the gas.

This is why you can see families literally light their tap water on fire in the movie Gasland from the leaking methane. And why homeowners across the country have had their drinking water ruined with the chemicals used in fracking.

Meanwhile, there is no place to put the toxic wastewater that comes back up from under the ground. About half of it stays underground forever. In Pennsylvania, it is often dumped into open pits where the toxic chemicals volatilize into the air. Sewage systems cannot handle it safely.

Gov. Andrew Cuomo has made some very important and strong statements about combating climate change, especially in the wake of Hurricane Sandy, which I applaud. But he must not believe the hype that fracking for gas is good for the climate. It isn't.

The methane that leaks from the wells, and even from the pipelines and compressors, is a very powerful greenhouse gas—100 times more than carbon dioxide. When the bedrock is shattered, the methane also migrates away from the wells. More than a tiny bit of this leakage makes fracked gas as great a problem for our climate as coal. And the leaks are not tiny.

I understand the pressure on the governor to create jobs and help the economies of rural areas. But fracking creates very few jobs, and most of them will not go to New Yorkers. We could create far more jobs by insulating every building in the state to save energy and changing all the windows to more insulating models. Doing this would save far more energy than fracking will ever produce, plus lower consumer heating and electric bills forever. In contrast, fracking and climate change will cause economic damage and decline.

Former Vice President Dick Cheney succeeded in removing fracking from all federal regulations. It is no longer covered by the Safe Drinking Water Act, or the Clean Air Act, or even the National Environmental Policy Act.

Governor Cuomo, please don't frack New York. Don't allow our beautiful landscapes to be ruined, or our precious and famous clean water to be dirtied.

No amount of regulation can keep these wells from leaking. Please stand up to the fossil fuel industry and save our water, our climate and our state. Let's make New York the Clean Energy Empire State, not the state of dirty fracking.

Yoko Ono is the co-founder with her son, Sean Lennon, of Artists Against Fracking.