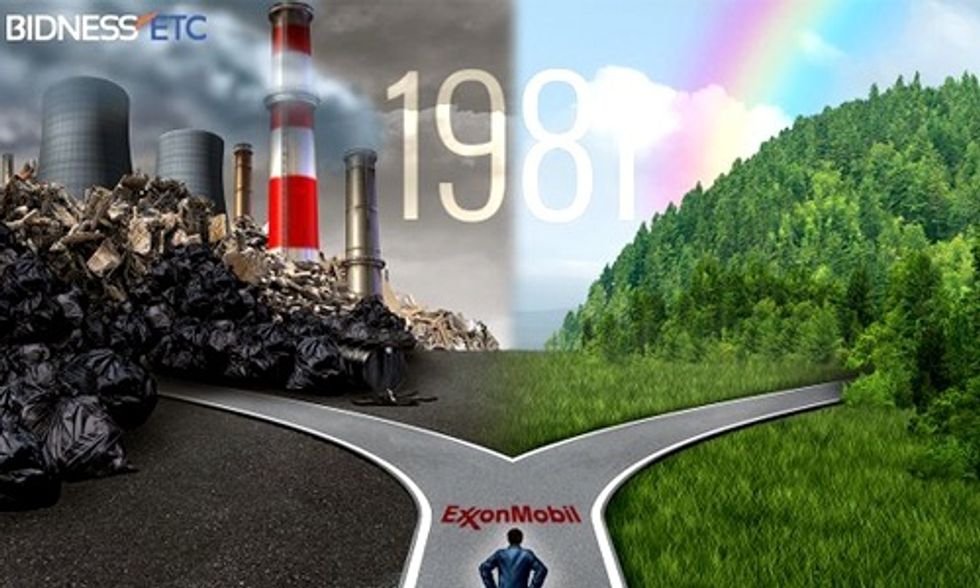 Like all proper scandals, the #Exxonknew revelations have begun to spin off new dramas and lines of inquiry. Presidential candidates have begun to call for Department of Justice investigations, and company spokesmen have begun to dig themselves deeper into the inevitable holes as they try to excuse the inexcusable.

As the latest expose installment from those hopeless radicals at the Los Angeles Times clearly shows, Exxon made a conscious decision to adopt what a company public affairs officer called “the Exxon position.” It was simple: “Emphasize the uncertainty.” Even though they knew there was none.

Someone else will have to decide if that deceit was technically illegal. Perhaps the rich and powerful have been drafting the laws for so long that Exxon will skate; I confess my confidence that the richest company in American history can be brought to justice is slight.

But quite aside from those questions about the future, let’s take a moment and just think about the past. About what might have happened differently if, in August of 1988, the “Exxon position” had been “tell the truth.”

That was a few months after Nasa scientist James Hansen had told Congress the planet was heating and humans were the cause; it was amid the hottest American summer recorded to that point, with the Mississippi running so low that barges were stranded and the heat so bad that corn was withering in the fields. Imagine, amid all that, Exxon scientists had simply said: “Everything we know says Hansen is right; the planet’s in serious trouble.”

No one would, at that point, have blamed Exxon for causing the trouble—instead it would have been hailed for its forthrightness. It could have begun the task of finding alternatives to hydrocarbons, and the world could have done the same thing. This would not have been an easy job: the world was utterly dependent on coal, gas and oil. But it would have become our planet’s single-minded job. With Exxon—largest company on Earth, heir to the original oil baron, with tentacles reaching around the world—vouching for the science, there is no way we would have wasted 25 years in fruitless argument.

There’s no way, for instance, that Tim DeChristopher would have had to spend two years in jail, because it would have been obvious by the mid-2000s that the oil and gas leases he was blocking were absurd. Crystal Lameman and Melina Laboucan-Massimo and Clayton Thomas-Muller would not have had to spend their whole lives fighting tar sands mining in Alberta because no one would seriously have proposed digging up the dirtiest oil on the North American continent. Students would not have—as we speak—to be occupying administration buildings from Tasmania to Cambridge, because the fossil fuel companies would long since have become energy companies, and divesting from them would not be necessary.

The rapid spread of decentralised renewable technology might have kept oil and gas barons like the Koch Brothers from becoming, taken together, the richest man on Earth, and purchasing America’s democracy. The Earth’s oceans would be measurably less acidic—and we are, after all, an ocean planet.

Some climate change was unavoidable even by 1988—that’s about the moment when we were passing what now seems the critical 350 parts per million threshold for atmospheric CO2. And with the best will in the world it would have taken time to slow that trajectory; there’s never been an overnight fix. So we can’t say which of the various droughts and floods and famines might have been avoided. But because we wasted those critical decades, we’re now committed to far more warming than we needed to be—as one scientist after another has shown recently, our momentum has carried to us the point where stopping warming at even the disastrous 2C level may at this point be barely manageable if it’s manageable at all.

Of all the lies that Exxon leaders told about climate change, none may quite top the 1997 insistence that “it is highly unlikely that the temperature in the middle of the next century will be significantly affected whether policies are enacted now or 20 years from now.”

Exxon scientists knew that was wrong, and so did pretty much everyone else. If you could poll all the experts about to descend on Paris for UN climate talks and ask them what technology would be most useful in the fight against climate change, I’m pretty sure they’d say: a time machine that could take us back 20 years and give us those wasted decades.

And if you think it’s just scientists and environmentalists thinking this way, it’s actually almost anyone with a conscience. Here’s how the editorial board of the Dallas Morning News—Exxon’s hometown paper, the morning read of the oil patch— put it in an editorial last week: “With profits to protect, Exxon provided climate-change doubters a bully pulpit they didn’t deserve and gave lawmakers the political cover to delay global action until long after the environmental damage had reached severe levels. That’s the inconvenient truth as we see it.”

Those years weren’t inconvenient for Exxon, of course. Year after year throughout the last two decades they’ve made more money than any company in the history of money. But poor people around the world are already paying for those profits, and every generation that follows us now will pay as well, because the “Exxon position” has helped take us over one tipping point after another. Their sins of emission, like so many other firms and individuals, are bad. But their sins of omission are truly inexcusable.

This op-ed first appeared in The Guardian.