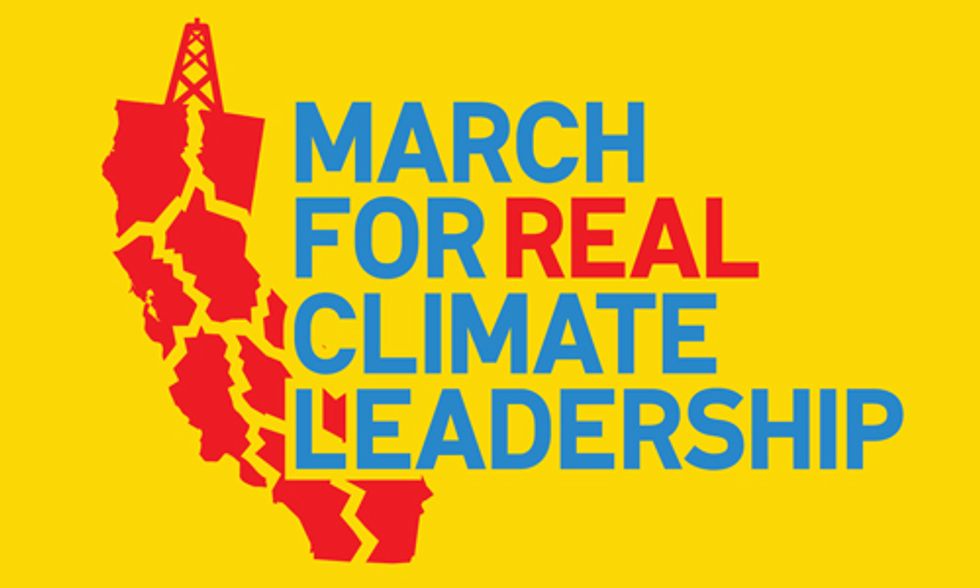 Earlier this month, almost every Republican in the U.S. Senate went on record that "climate change is real and not a hoax." All but a handful, however, balked at agreeing that humans are contributing to that change. The "not a scientist" club has a new line in the sand: "Climate change? Sure, whatever, but humans are not the problem."

The March for Real Climate Leadership will call on Governor Brown to protect all Californians by stopping fracking.

Oddly enough, they almost have a point—if only by accident. The blame game won't get us anywhere. When it comes to climate change, what's most important isn't whether humans are causing the problem (as the real scientists keep insisting), but whether humans can be part of the solution. Fortunately, we don't need a vote in the U.S. Senate to answer that question.

We talk a lot about "climate solutions"—from renewables like wind and solar to energy efficiency to emissions targets to international agreements—and rightly so. But, ultimately, those things are just tools. The most important requirement for success is not a technology, policy, or ideology. It's people—people who recognize the incredible opportunity to transform our civilization by leaving dirty fuels behind and who won't settle for anything less.

Naturally, we want to be able to count all of our leaders among those people. Unfortunately, even many leaders who say they understand the importance of clean energy, don't always act like they do. President Obama, for instance, has done as much as anyone to advance renewable energy, yet he still boasts about the oil- and gas-drilling boom occurring on his watch.

Meanwhile, in California, a state has led the way on tackling carbon pollution and advancing clean energy, Governor Jerry Brown, who in many ways is a true climate champion, has been reluctant to show leadership on the issue of fracking and the need to sharply curtail fossil fuel production.

In this case, Governor Brown is out of step with the people of California, who see no reason why boosting oil company profits means they must accept the risks and environmental damages of fracking. But he's also out of step with climate science—even if fracking were otherwise completely harmless, the carbon emissions from more oil and gas development would be at odds with the state's climate goals.

But even though many of our leaders aren't yet where they should be, you can't say the same about the American people. As the New York Times reported last week: "An overwhelming majority of the American public, including nearly half of Republicans, support government action to curb global warming, according to a poll conducted by The New York Times, Stanford University, and the nonpartisan environmental research group Resources for the Future."

Clearly, there's a disconnect. So here's what we're going to do—in California and everywhere. We the people are going to hold our leaders accountable and demand real leadership on climate. Yes, we did that last year at the People's Climate March in New York, but that was just the beginning. This climate movement will be everywhere—wherever you look. Wherever a community demands protection for their drinking water, we'll be there. Wherever a mother testifies that her kids can't breathe because of the coal plant in their neighborhood, we'll be there. We'll be there when the storms flood our cities, and we'll be there when the pipelines break and the oil trains spill. And, when people finally can get all their power from clean energy and live their lives without the fear of toxic pollution, why, we'll be there.

This coming Saturday [Feb. 7], though, we'll be there in Oakland. The March for Real Climate Leadership will call on Governor Brown to protect all Californians by stopping fracking. If we want climate action (and according to The New York Times we do!) then we must demand that our leaders stand up to the oil and gas industry and "walk the walk" when it comes to clean energy. If you're in the area, join us! If not, don't worry. Soon enough, we'll be there.