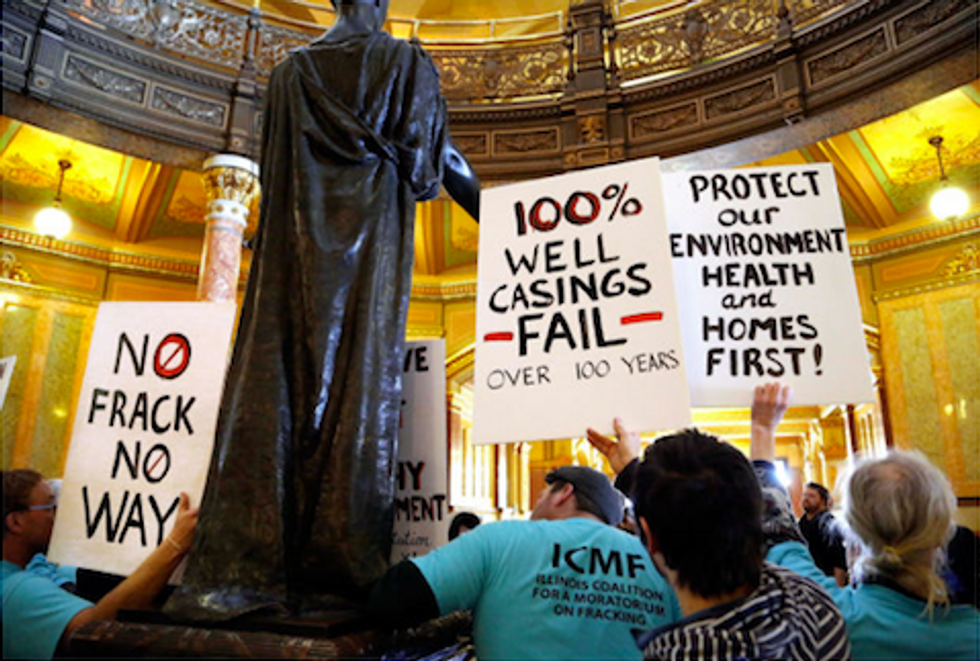 On Friday, a coalition of grassroots organizations including Americans Against Fracking, Illinois People’s Action and Southern Illinoisans Against Fracturing Our Environment (SAFE) urged Gov. Quinn and Speaker of the House Michael Madigan to reject a bill pending in the legislature that would allow hydraulic fracturing in the state and instead pass a moratorium.

Their call was reinforced by more than 500 concerned citizens who flooded statehouse phone lines asking the leaders to protect Illinois families and communities from fracking, and by Americans Against Fracking advisory board members Josh Fox, Natalie Merchant and Mark Ruffalo who voiced their opposition to the bill through social media.

“With the end of the legislative session in sight, it would be a huge mistake to pass any law that merely regulates fracking in Illinois, as doing so will only provide a roadmap for the industry,” said Jessica Fujan, Midwest organizer for Food & Water Watch.

“We have evidence indicating that fracking cannot be done safely. In Pennsylvania, a state with regulations firmly in place, Department of Environmental Protection data shows that nearly nine percent of all shale gas wells are already leaking. These violations are increasingly unlikely to receive any response or penalty. Is this what we want for Illinois?”

Although fracking is not currently taking place in Illinois, HB 2615 would endanger public health by establishing weak standards of operation for the oil and gas industry. For more than a year, investors have owned mineral rights in southern Illinois that would allow them to drill. Until now, public controversy and regulatory uncertainty have seemingly kept the drillers at bay. With new legislation on the table, energy companies have announced plans to begin drilling as early as this spring.

HB2615 fails to require full disclosure of the chemicals used in fracking and would allow fracking operations to be constructed just 500 feet from water wells, homes, churches, schools, hospitals and nursing homes. The bill would allow the process to take place 300 feet from rivers, streams, lakes, reservoirs and ponds, and would endanger water supplies by only sampling and testing water near drilling sites up to 30 months after drilling and fracking, despite the fact that the risk of underground contamination associated with these activities can persist for years. Opponents of the bill are also concerned that it would fail to provide local control by county government over whether the process can occur in a given jurisdiction.

"HB2615 doesn’t begin to cover major areas of concern regarding fracking," said Annette McMichael, communications director of SAFE. "There’s no mention of air emission monitoring, for example. Studies have repeatedly shown that fracking emissions cause cancer, lung disease and a variety of other ailments. If legislators truly care about the health and well-being of the people of Illinois they should withdraw their support for this bill."

Groups opposing HB2615 are asking state leaders to instead support HB3086, which would impose a two-year moratorium on fracking while further studies are conducted.

The detrimental effects of fracking are numerous and well documented. Extracting, transporting and burning natural gas all contribute significantly to greenhouse gas emissions and worsen global climate change. In addition to the carbon dioxide emitted from burning natural gas, significant amounts of methane leak as new wells are fracked and as natural gas is transported.

Methane is a potent greenhouse gas, about 33 times more efficient at trapping heat than carbon dioxide over 100 years and about 70 to 100 times more potent than carbon dioxide over 20 years according to a 2009 study published in the magazine Science. More than 1,000 cases of water contamination have been documented near fracking and drilling sites in the U.S. Public backlash against fracking has escalated in recent years. To date, more than 300 U.S. communities have taken action against the process.