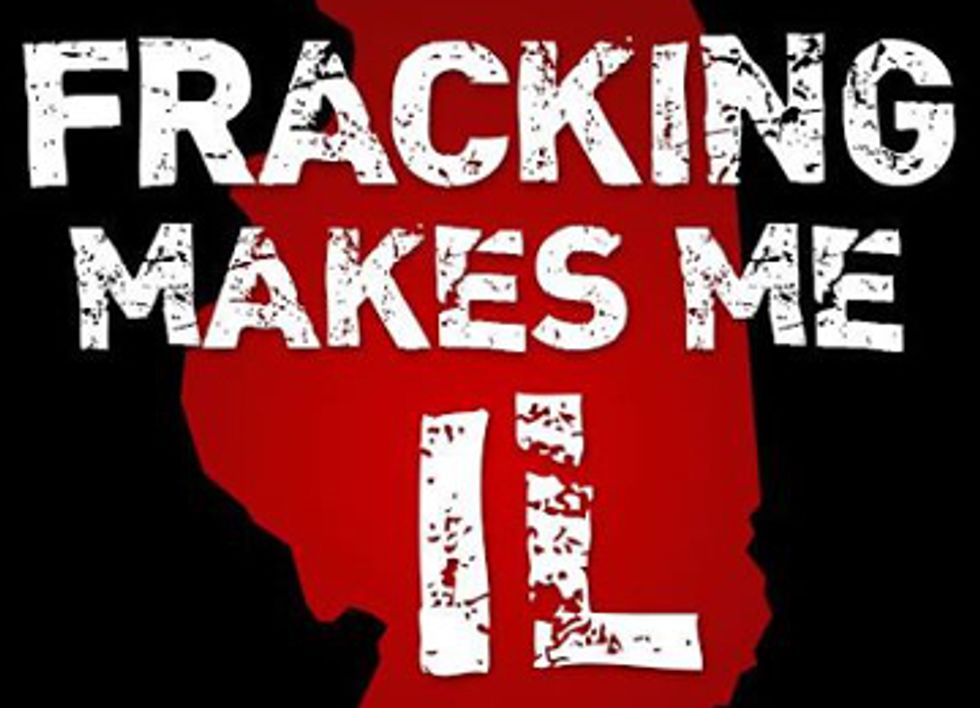 After lengthy private negotiations, a pro-fracking regulatory bill finally saw the light of day in the Illinois legislature last week. Unsurprisingly, it's being rushed through the legislature faster than a vampire escaping the first rays of morning sunshine.

Under the direction of Illinois Gov. Quinn, this bill, which will give rise to shale gas extraction of oil and gas in a state that has not yet seen large-scale fracking, had been crafted in the shadows for many months. But what has caught everyone in Springfield unawares is the equally swift and ferocious citizen opposition, which has arrived on the scene with a wooden stake and the fury of Van Helsing.

Four days of sit ins and arrests at Gov. Quinn’s office mark the rapidly growing momentum of the grassroots movement to stop fracking in Illinois. As an intense series of actions last week demonstrate a deep level of commitment among concerned citizens, the national spotlight turns toward Illinois and has captured the attention of powerful progressives, environmentalists and national anti-fracking forces.

"Residents in the areas targeted for fracking have been denied any meeting and any voice in the backdoor negotiations," said Dayna Conner, a Southern Illinois landowner and mother of three who was arrested for sitting in at Gov. Quinn’s office last Wednesday. "Gov. Quinn and Attorney General Madigan have negotiated away our health and well being to the gas industry for fracking that will devastate our homes and put our families at risk."

At the heart of the issue is the regulatory bill. Although the bill has half-hearted support from some environmental groups who argue that compromise regulation is better than none at all, the grassroots believe it will pave the way for widespread fracking in two-thirds of the state. They are stalwart in advocating for a moratorium on fracking and vow to ramp up their fight until fracking is stopped.

Pointing to serious inadequacies in the proposed regulations, they note that the bill was crafted with the participation of industry and legislators taking thousands in campaign contributions from fracking interests. The invitation-only meetings included no input from scientists and health professionals. Many downstate environmental leaders believe that residents and organizations in the areas of the state targeted for fracking would have agreed to far fewer compromises had they been included in negotiations.

Activists point to dangers from water contamination, air pollution and fracking in Illinois' active earthquake zones. They question whether fines will be large enough to deter violations, and doubt rules will be adequately enforced by a badly underfunded, understaffed department that's notoriously cozy with extracting industries. Several counties already passed anti-fracking ordinances, but the state bill would stop them from setting many local restrictions. With little or no scientific basis for the regulatory bill, they believe that Attorney General Madigan, Gov. Quinn and others who brokered the deal are sacrificing their communities for the oil and gas industry's hypnotizing promises of jobs and revenue.

Those arguments were the basis for escalating protests last week. Friday was the fourth day-long sit in at Gov. Quinn’s office as activists demanded a meeting with the governor to urge him to support a moratorium. They pointed to countless requests for a meeting over the previous 18 months and called this a last resort. The sit in on Thursday ended with three arrests as the Capitol building closed, with many more concerned citizens there in support throughout the day.

Springfield resident Melody Lamar was arrested Thursday and spoke to a rally Friday to deliver the message that Illinois politicians would be held responsible for what she called the inevitability of sick families, ruined farms and environmental devastation from fracking.

The sit ins and arrests began Tuesday after citizens packed the Illinois House Executive Committee’s hearing on the regulatory bill, demonstrating strong opposition and erupting in chants of “shame!” when it passed.

Joining residents from across the state in speaking against the bill were Academy Award-nominated Gasland filmmaker Josh Fox and Sandra Steingraber, PhD, a nationally acclaimed environmental health expert, biologist and author who grew up in Illinois. Steingraber testified that the proposed regulations failed to protect public health and the environment, and called the process for creating them "anti-scientific decision making."

Earlier in the week in Normal, IL, Josh Fox launched a grassroots tour for his sequel documentary, Gasland Part II, which comes out on HBO in July. More than 400 packed the theater, giving the film a long standing ovation and staying late to learn how to take action.

As grassroots groups such as Illinois People’s Action and Southern Illinoisans Against Fracturing increase pressure for a moratorium, the national anti-fracking, environmental and progressive movements are focusing on Illinois. Actor, director and leading anti-fracking activist Mark Ruffalo was among those urging the state not to allow fracking, tweeting on Thursday that, "Fracking cannot be done safely, don't poison Illinoisans."

After escalating action by the grassroots, both the Natural Resources Defense Council (NRDC) and the Sierra Club clarified their organizational positions on the compromise regulatory bill and the moratorium. Both note that the regulatory bill will not protect public health and the environment and that they would prefer a moratorium. The NRDC wrote last Monday, "make no mistake, there are still deficiencies and this bill won't make fracking safe." Sierra Club Illinois echoed the sentiment later that same day, writing that the new regulations "will not make fracking safe."

Yet, politicians and industry representatives have used the support of two national environmental groups for the regulatory bill to marginalize residents from fracking regions who continue fighting for a moratorium.

It’s clear that citizens want the regulatory bill laid to rest and that now no problem resulting from fracking will go unnoticed or unchallenged. The newly emboldened grassroots warn that the regulatory bill will not only spell disaster for Illinois but that it will come back to haunt those who created and supported it. As concerned citizens testified last Tuesday, they intend to hold those who paved the way for fracking Illinois responsible for every accident and every poisoned well. Given their increasing momentum—and agreement in the environmental and progressive community that the regulations are grounded in political expediency rather than science—elected officials would be wise to take heed.