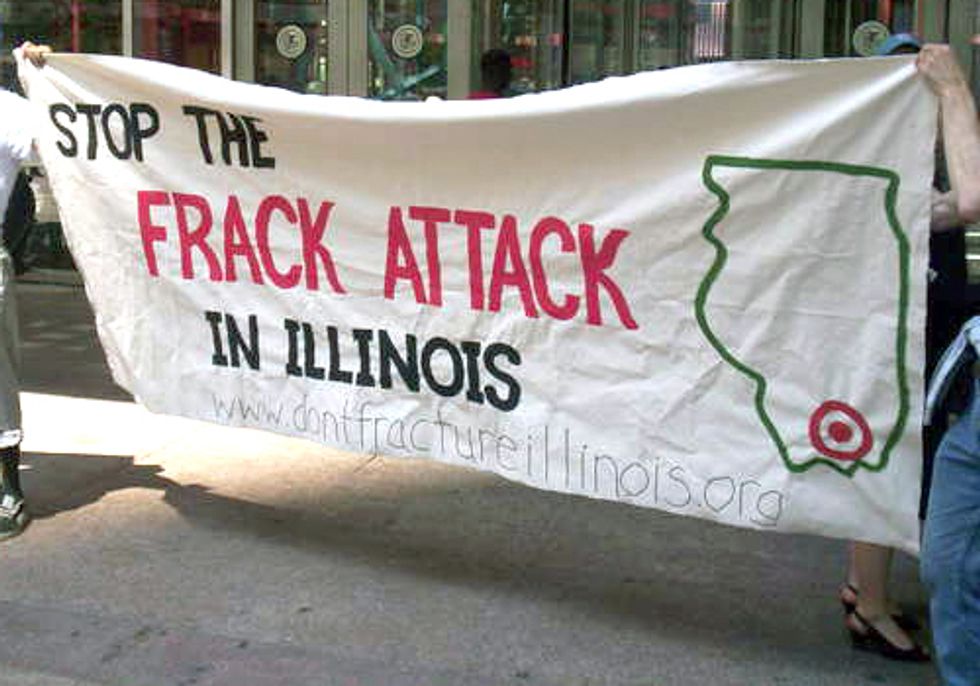 Illinois is the next state on the American Legislative Exchange Council (ALEC)'s target list for putting the oil industry's interests ahead of the public interest.

Ninety-eight percent funded by multinational corporations, ALEC is described by its critics as a "corporate bill mill" and a lobbyist-legislator dating service. It brings together corporate lobbyists and right wing politicians to vote up or down on "model bills" written by lobbyists in service to their corporate clientele behind closed doors at its annual meetings.

These "models" snake their way into statehouses nationwide as proposed legislation and quite often become the law of the land.

Illinois, nicknamed the "Land of Lincoln," has transformed into the "Land of ALEC" when it comes to a hydraulic fracturing ("fracking") regulation bill—HB 2615, the Hydraulic Fracturing Regulation Act—currently under consideration by its House of Representatives. Fracking is the toxic horizontal drilling process via which unconventional gas and oil is obtained from shale rock basins across the country and the world.

HB 2615—proposed on Feb. 21 with 26 co-sponsors—has an ALEC model bill roped within this lengthy piece of legislation: the loophole-ridden Disclosure of Hydraulic Fracturing Fluid Composition Act.

This model bill has been proposed and passed in numerous statehouses to date. If the bill passes, Illinois' portion of the New Albany Shale basin will be opened up for unfettered fracking, costumed by its industry proponents as the "most comprehensive fracking legislation in the nation."

"If At First You Don't Succeed, Dust Yourself Off and Try Again"

This isn't ALEC's first fracking-related crack at getting a model bill passed in Illinois. In 2012, the Disclosure of Hydraulic Fracturing Fluid Composition Act—introduced as SB 3280—passed unanimously by the Illinois Senate but never passed the House.

SB 3280 isn't merely an ALEC model, but is a Council of State Government's (CSG) model, too.

The "disclosure" standards' origins lay in the Obama Department of Energy's (DOE) industry-stacked fracking subcomittee, formed in May 2011 "to study the practice of hydraulic fracturing (fracking), and determine if there are ways, or even a necessity, to make it safer for the environment and public health."

As exposed by The New York Times in April 2012, these "disclosure" standards were originally written by ExxonMobil, first passed in Texas in June 2011, and now serve as both an ALEC and CSG model bill for the states. I say "disclosure"—as opposed to disclosure—because the bill includes loopholes for "trade secrets," ala the "Halliburton Loophole" written into the industry-friendly federal Energy Policy Act of 2005.

Ever persistent, ALEC has taken the late pop diva Aaliyah's words to heart with regards to chemical fluids "disclosure," at first not succeeding and dusting itself off and trying again.

The oil and gas industry has chosen FracFocus as the entity to oversee the chemical disclosure process. An August investigation by Bloomberg News revealed that FracFocus offers the façade of disclosure while the industry tramples roughshod over communities nationwide.

"Energy companies failed to list more than two out of every five fracked wells in eight U.S. states from April 11, 2011, when FracFocus began operating, through the end of last year," wrote Bloomberg. "The gaps reveal shortcomings in the voluntary approach to transparency on the site, which has received funding from oil and gas trade groups and $1.5 million from the U.S. Department of Energy."

In reality, FracFocus is a public relations front for the oil and gas industry, as we reported in Dec. 2012, explaining,

Another Nov. 2012 Bloomberg investigation revealed that oil and gas corporations "claimed trade secrets or otherwise failed to identify the chemicals they used about 22 percent of the time," according to its analysis of FracFocus data for 18 states.

The bipartisan "group of 26" took a total of $53,060 before the Nov. 2012 election, data collected from the National Institute on Money in State Politics shows.

How Will IL Regulate Fracking with 12 Inspectors?

Democratic Gov. Pat Quinn's 2012 budget included Department of Natural Resources (DNR) cuts to the tune of 13.5 percent for fiscal year 2013. The DNR is the regulatory body tasked to referee the fracking process under HB 2615, an agency which in the past decade has lost over half of its budget.

"Our agency has essentially been cut in half over the last decade. There are a lot of ramifications...You're going to see a noticeable difference in the maintenance. It won't be the fault of the people that work for us," DNR Director Marc Miller said at a Feb. 2012 public forum in a foreshadowing manner. "It will be because we don't have the resources."

There are 12 inspectors in IL to oversee fracking regulation enforcement, among myriad other regulatory duties, down from 28 in 2005, as revealed in a recent Freedom of Information Act conducted by ProPublica.

"What we are looking for is a sustainable solution," Miller said at the public forum. "We want to get to the point of having revenue we can count on to plan and to be able to do the programs we're supposed to do for the public."

Yet Miller believes more DNR cuts from Quinn are in the works in forthcoming budgets.

Earthworks pointed out in a Sept. 2011 report, Breaking All the Rules: the Crisis in Oil & Gas Regulatory Enforcement, that numerous states—akin to Illinois—are vastly understaffed, underfunded and unable to do their jobs to protect the public. Predictably, this has led to under-enforcement, lending the oil and gas industry a free pass to contaminate without accountability.

And even with enforcement, Earthworks pointed out that because the penalties for breaking the law are so minimal, the industry simply passes this off as a tiny "cost of doing business."

Despite this reality, two major green NGOs—the Sierra Club and the Natural Resources Defense Council (NRDC)—have come out in cautious support of the bill.

"NRDC is working to transition as quickly as possible to a clean energy future based on energy efficiency and renewable energy, but as long as we have to have dirty fossil fuels, our communities need the strongest rules in place," NRDC's Henry Henderson wrote in a blog post, offering the important caveat that "Those rules are only as good as their enforcement, which needs to be robust and strict. And that is another issue that we will be following if this bill moves forward."

No concerns are raised about Section 25 of the bill dealing with setbacks and prohibitions.

This section lends the industry the ability to conduct fracking operations within 1,500 feet of groundwater sources and 500 feet of schools, houses, hospitals, nursing homes and places of worship. It also enables the industry to frack within 300 feet of rivers, lakes, ponds and reservoirs.

These regulations do not take into account the fact that the horizontal drilling portion of the fracking process extends between 5,000 and 10,000 feet. The sobering reality: none of these things would be protected under this bill's current language.

"We may not be able to decide whether fracking comes to Illinois, but we absolutely must decide to make sure we are as protected as we can be," Sierra Club's Jack Darin concluded on The Huffington Post, despite the fact that fracking has yet to begin in the state.

Other Groups Call for a Moratorium, Support Alternative Bill

Other groups are fighting for a different recently-introduced moratorium bill, SB 1418, which has one sponsor so far, Sen. Mattie Hunte (D-94).

That effort is being led by the Illinois Coalition For A Moratorium on Fracking, whose members include Southern Illinoisans Against Fracturing Our Environment (SAFE), MoveOn.org Illinois, Progressive Demcrats of America (PDA) Chicago and Illinois, Stop the Frack Attack on IL, Rising Tide and Rainforest Action Network (RAN) Chicago.

"The moratorium will allow two years for a science-based investigative task force to look at current and ongoing studies on fracking," the Coaliton's press release in support of SB 1418 reads. "As new research continues to uncover more harmful effects of high-volume fracturing, both in the surrounding area and to the climate, ICMF, SAFE and many other environmental organizations are committed to supporting studies on the procedure."

SAFE, one of the coalition members, will host a one-day summit The Fracking Truth on March 1 to rally people in support of the moratorium bill.